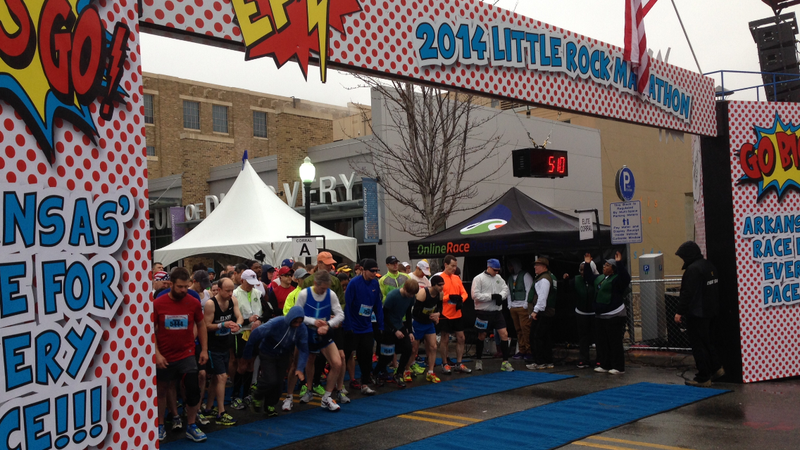 Runners get set to begin the 2014 Little Rock Marathon on Sunday morning.

For Mark Chepses and Leah Thorvilson, winning the Little Rock Marathon is getting to be a common thing.

Chepses captured his fourth title in the event's men's division, while Thorvilson won for the fifth time in eight races in the women's division on a cold, rainy Sunday morning. Chepses, of West Des Moines, Iowa, came across the finish line first with a time of 2:25:45, while Thorvilson, of Little Rock, finished in 2:42:39.

Chepses said this win was the most challenging of his four titles. The 11th version of the event featured around 11,000 runners from all 50 states and 41 countries.

For Thorvilson, the win was made more gratifying after what she called a "heartbreaking" end to the 2013 race. Hampered by a torn hamstring through most of last year's training, The former Arkansas-Little Rock runner switched her plans halfway through the race, changing course and running the final few miles of the half marathon. She had surgery on the injury a few weeks later and months of recovery and rehabilitation followed.

The race proved to be tougher for all involved, as runners times were slower than in the 2013 race. Chepses 2013 winning time was six minutes faster than this year's race at 2:19:45.

The marathon went off smoothly early Sunday with a full roster of runners packing the starting line along President Clinton Avenue to take part in the 10K, half- marathon and marathon events.