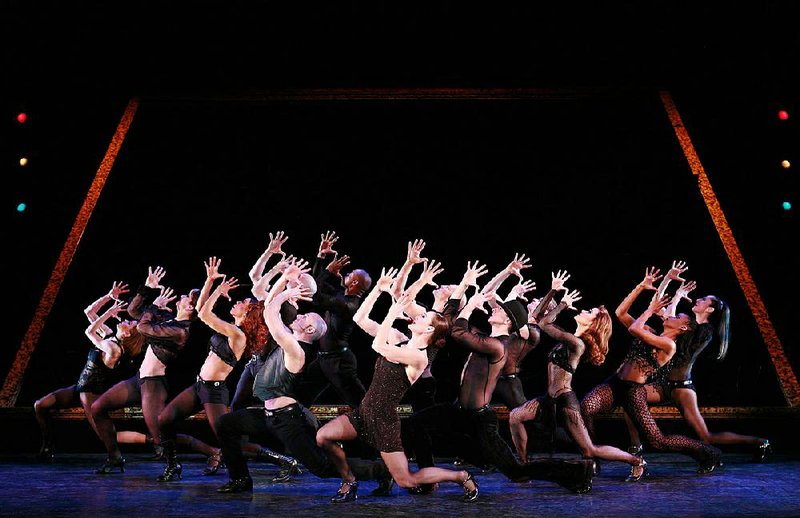 "All That Jazz" from the touring production of "Chicago,"

The center has also announced its 2014-15 Broadway series season:

Oct. 21-26: Nice Work If You Can Get It, 1920s-style musical comedy with songs by George and Ira Gershwin, book by Joe DiPietro

April 29-May 3, 2015: Once, music and lyrics by Glen Hansard and Marketa Irglova, book by Enda Walsh, based on the movie of the same name, written and directed by John Carney

The Arkansas Symphony will open its 2014-15 River Rhapsodies season at the Clinton Presidential Center, 1200 President Clinton Ave., Little Rock, Sept. 30 with a concert titled “Death and the Maiden.” The centerpiece will be Franz Schubert’s String Quartet No. 14 in d minor, “Death and the Maiden.” The program will also include 3 Idylls by Frank Bridge and the Horn Trio in E-flat major by Johannes Brahms.

Violinist Vadim Gluzman, who will solo with the orchestra in Brahms’ Violin Concerto Feb. 28-March 1, 2015, will be this year’s Artist of Distinction, playing Lera Auerbach’s Lonely Suite, subitled “Ballet for a Lonely Violinist” March 3, 2015. The program will also include the Serenade in C major, op.10, by Ernst von Dohnanyi; Alban Berg’s The Featherlight Ballet; and the String Quartet in a minor by Max Bruch.

The remainder of the schedule (all concerts, 7 p.m., Clinton Center Great Hall):

The orchestra has also filled a couple of holes in its Masterworks and pops season listings:

Andrew Staupe will be the soloist in Sergei Rachmaninoff’s Piano Concerto No. 2 Sept. 27-28.

Vladimir Verbitsky, conductor laureate of the West Australian Symphony Orchestra, will be the guest conductor for the Jan. 31-Feb. 1 concert pairing.

And pianist Jeffery Biegel will join singer Sylvia McNair and the orchestra for a pair of Gershwin-themed pops concerts March 14-15, 2015.

The organization will give Portis a Lifetime Achievement Award. Speakers will include Thea Foundation Executive Director Paul Leopoulos and Conway High School student Annika Miller, winner of the foundation’s 2014 Creative Writing Scholarship, to which the Porter Fund recently contributed $4,000.

The inaugural exhibit will include work by members of the Ozark Regional Arts Council, university art students and the university’s permanent collection. Hours are 8 a.m.-5 p.m. Monday-Friday and during special events. Admission is free. Call (870) 508-6280 or visit asumh.edu.