Veteran of the Year grounded in integrity, service to others, excellence in endeavors, family 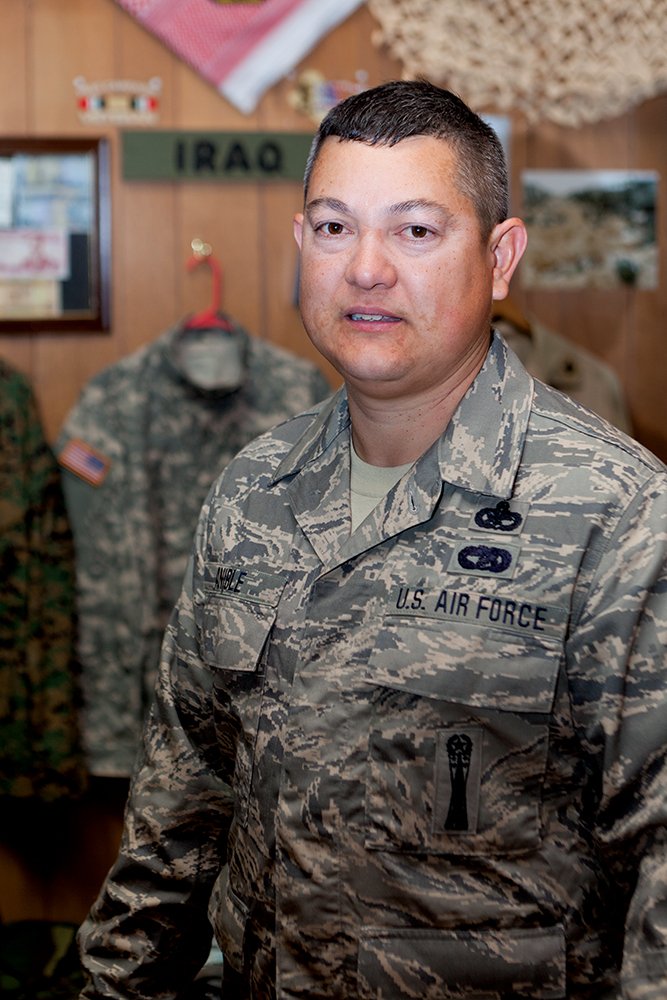 First Sgt. Brian Anible of Conway, who serves with the 188th Mission Support Group of the Arkansas Air National Guard in Fort Smith, was awarded the title of 2014 Faulkner County Veteran of the Year on March 14.

First Sgt. Brian Anible of Conway with the 188th Mission Support Group, Arkansas Air National Guard in Fort Smith, received a standing ovation when he was awarded the title of 2014 Faulkner County Veteran of the Year.

The honor, sponsored by the Museum of Veterans and Military History in Vilonia, was given March 14 in front of approximately 200 people at the Vilonia Area Chamber of Commerce banquet.

Anible said that when he accepted the award, he felt the same sense of appreciation as he did in 2005 when he and his fellow soldiers in the Air National Guard, 188th Fighter Wing, were loading a plane for an 18-hour flight headed to Balad, Iraq.

“It was just like that Super Bowl commercial from awhile back. Citizens were clapping as we walked by. We walked single file, with our backpacks. It brought chills to me then, and it still does when I think about it. I was never so proud to be an American,” Anible said.

Appreciation, smiles and applause go a long way to a member of the military when a nation is at war, he said.

He said he regards his time in Iraq as “pretty uneventful,” if you don’t count the encounters with bats, camel spiders, 115-degree heat, lack of rain and bouts of homesickness, that is.

Anible said he didn’t know what to expect the first couple of days, and the base was hit daily with mortar fire.

“After the first week, everything was at ease,” he said. “When you are well-trained, you don’t think about danger.”

His job was to load weapons on F16s. Using a marker, he would draw pictures and write messages to his two sons, Brandon and Blane, as well as other sayings, such as “Go Hogs” on the bottom side of the bombs.

He used his “downtime” for eating, sleeping and playing basketball, he said. There was plenty of food — good food. He said he ate better in Iraq than when he was at home. The dining hall served steak and lobster on a regular basis, which he acknowledged is different than other wars.

Anible began his military career in 1987 by enlisting in the Air Force when he was 19 years old. It’s a tradition in his family to serve, but not one that he ever intended to follow.

“Many generations of Anibles have served in all eras and branches of service,” he said, mentioning his dad, retired Air Force Senior Master Sgt. Donald Anible. His dad, he said, was in the communications field. He served two tours in Vietnam and had multiple temporary duty assignments away from his family. He said he has the utmost respect for his dad and, now as an adult, understands the sacrifices he made for his family. Once, he said, his dad turned down a promotion, one that he probably really wanted, to allow his family to remain in Arkansas. The promotion, Anible said, would have required the family to move to Germany.

Growing up as a “military brat,” Anible said, “I didn’t feel cool about being in the military. It really wasn’t about the service. I just didn’t want to go anywhere.”

As a youngster, he had lived in several places including California, Germany and Oklahoma, as well as twice in Arkansas, where he said he decided he wanted to live the rest of his life.

Shortly after he graduated from Cabot High School in 1986, he enrolled at Arkansas State University-Beebe, with his dad footing the bill.

“I discovered the first semester that I didn’t really want to be in college,” he said. He dropped out and began working at a Knight’s grocery store.

On a whim, he went to see former Air Force recruiter Buddy Burns at Jacksonville. He said Burns asked him hypothetically “if he were to enlist,” what kind of job he would like to pursue.

Anible said he told Burns that he “guessed” he would like a job in supply. A few weeks later, Anible said, he was headed to basic training with his immediate future directed to loading bombs on aircraft.

He said he had a few misconceptions regarding basic training. “I thought it would be some marching and getting in shape,” he said.

After about three days, he said he decided the best thing for him to do was to blend in. After basic training, he was sent to Lowry Air Force Base in Colorado to attend a technical training school that focused on training for loading bombs. When his plane landed, he said, there was 3 feet of sleet on the ground, and he had reservations about what was to come. He said he has never been as cold as he was there while marching in formation, calling cadence and singing chants.

Officials of the Vilonia museum said Anible’s award wasn’t just about his military service, but also about what he has done in his civilian life. The list of accomplishments there is long as well. He is a single dad raising sons and is active in his church. He is the manager at Copart in Conway, where he was worked since 2001. He serves on the board of directors for the Museum of Veterans and Military History, which opened in 2012. He also helps with fundraising for the museum and chairs the annual Veterans Run each November.

What inspired his volunteerism with the employer-support organization, Anible said, is his relationship with Copart, especially during his time of deployment. “I know now that was special,” he said. “I just thought then all companies were just as supportive.”

Anible said not only did Copart pay half of his salary while he was gone, but employees also remained in close contact with him. There was no doubt in his mind, he said, that he would be able to return to his job when his service was complete.

He said he learned that is not always the case in workplaces. Volunteering with Arkansas Employer Support of the Guard and Reserve, he said, has provided him the opportunity to help service members and employers work better together.

In 2011, Copart decided to go a step further, he said, and formally support the project by posting “statements of support” regarding the hiring of veterans in its 150 operations nationwide.

“I’m just so proud to have had a small part in this,” he said. He pointed to a framed card displayed on a shelf in his office and signed by Jay Adair, president of Copart. On that card, Adair wrote that he is proud of Anible and thanked him for his service overseas.

Anible said he plans to stay with Copart and with the Air National Guard “as long as they will have me.” He said he will continue to volunteer with the employer-support organization and the museum, although he may put in fewer hours so that he has more family time.

As far as his advice for young recruits, he said, joining the military is the best thing that he could have done.

“I gained a level of respect for my parents, the country and the flag and that the world doesn’t revolve around Brian Anible,” he said. He said his motivation now is for his kids and future grandkids.

“I need to be a good example for them so they will keep the bar high,” he said.

To do that, he said, he always relies on the core values taught to him in the military: “Integrity first. Service before self and excellence in all we do,” he said. Reciting them in his head on a regular basis, he said, motivates him to do his best.

Those values, he said, are the glue that ties those who are serving now to those who have served in the past.