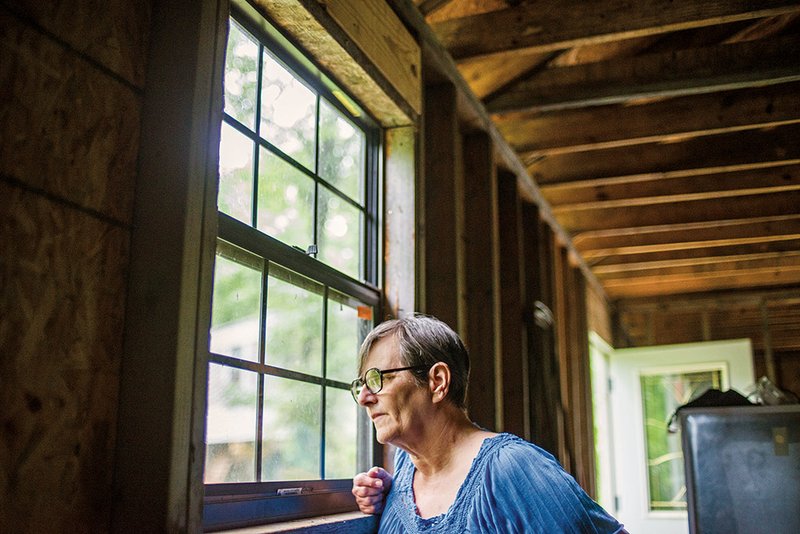 Amy West of Vilonia is still without a house of her own after the 2011 tornado that hit Vilonia, destroying three residences that belonged to her family, including one where she lived with her husband, Robert.

Amy West of Vilonia still has nightmares about the 2011 tornado that hit the Vilonia area, destroying three residences that belonged to her family, including the one she lived in with her husband, Robert.

“Our old house is still lying on the ground,” said West, now 60, referring to an older-model mobile home in rural Vilonia. “We have been rebuilding for three years — a piece at a time. We have spent every extra penny [that we] could to rebuild, and we still can’t get in a house.”

The couple haven’t asked for any help with building and equipping the 16- by 42-foot home they plan to live in, West said, until now. The outside walls are up, but they still need insulation, wiring, paneling, a septic system and “a hand up” installing it all.

“This is hard for me to put it all out there,” West said. “We were raised — you just do what you’ve got to do to survive. You don’t go asking for any handouts.”

West said she fears the rebuilding project may outlast their lives. Neither she nor her husband is a “spring chicken,” she said, and both are in bad health.

At this late date, and in light of the recent tornado, she said, she fears she may hit a dead end trying to get assistance from agencies.

She said she hopes some good Samaritan is listening.

“I’m just hoping someone is listening,” she said. “My husband says God will take care of us. His pride is hurt because he can’t take care of this.”

She makes it clear that she isn’t asking for money for her family, but she thinks someone may have some leftover materials and manpower they would be willing to donate.

Her husband, Robert West, is a retired logger and draws Social Security. Amy West was a teacher until her health deteriorated, and she draws disability. Together, the couple’s income is just more than $1,300 per month.

The couple have faced a long list of health issues, which, she said, began in 1999 when she was diagnosed with a brain tumor. West said that since 2006, she has had eight surgeries, all related to the tumor.

Along with a partial loss of vision resulting from the tumor, West has dysautonomia, a malfunction of the autonomic nervous system. Thus a large portion of the couple’s income goes for medical expenses.

The couple live with their son Matt, whose house is the only one in the family that was not damaged in either tornado, West said.

Their son Mark lost his home in the 2011 tornado.

In the recent tornado, the home Mark was renting on Church Street sustained roof damage, but West said the landlord will be responsible for the roof repair.

The Wests plan to continue living with Matt, she said, until they are able to move into the home they are rebuilding.

West spends some of her time with her 82-year-old mother, Virginia Falk, who is in an assisted-living center in Conway.

In the 2011 tornado that hit the Black Oak addition, Falk’s mobile home was picked up and slammed around, West said. The home’s two bathtubs were found 40 yards away, over a hill. First responders, West said, didn’t discover her mother until a second sweep of the debris.

Falk was found sitting in the wheelchair she had received the night before, with her cat, Sweetheart, in her lap. Falk’s nightgown had been torn off her body, and she had a dislocated shoulder and broken ribs, among other injuries.

As well as the mental scars, West said, her mother still has some of the physical scars on her arms.

“For the record, so are we,” West said. “I just want my house back and be back to living some kind of normal. It’s been three years — that’s long enough.”