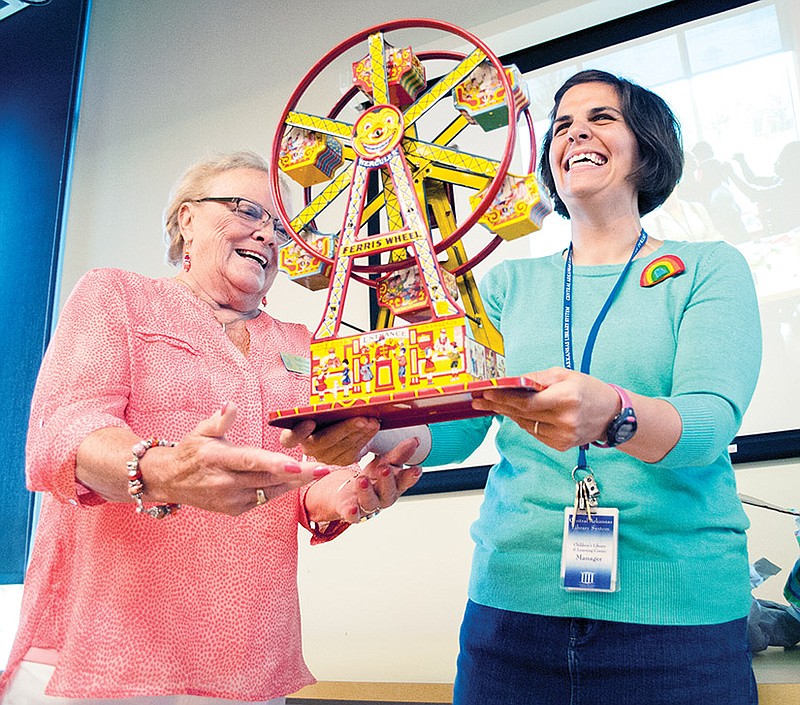 Beth Goeden, left, with the Hot Springs Vapor Valley Questers, presents an antique Ferris wheel toy to Sarah McClure, manager of the Hillary Rodham Clinton Children's Library and Learning Center. The toy is part of a program to donate special items to the library system for display.

LITTLE ROCK — Anticipation was high in the meeting room of the Hillary Rodham Clinton Children’s Library and Learning Center in Little Rock. Members of the Vapor Valley Questers Chapter of Hot Springs and Hot Springs Village had brought another gift for the library.

The Questers’ earlier gift in August 2013 was an 85-piece collection of vintage toys. This latest gift on May 19 was to be the capstone of that collection.

Beth Goeden of Hot Springs Village, chairwoman of the Toys of Yesteryear project, presented a brightly wrapped package to Sarah McClure, manager of the children’s library. Inside was a 1930s vintage Chein Hercules Ferris wheel windup toy made of tin.

Goeden pointed out, “It’s a windup.” As she wound up the toy and it began to go around, oohs and aahs could be heard throughout the room. The gondolas also swing as the wheel goes around.

“This is gorgeous,” McClure said. “This might have to be displayed on the front desk for a while so the kids can see it move.”

Goeden said the Questers purchased the Chein Ferris wheel with the help of a grant from the state organization, Arkansas Questers. She said they enlisted the help of Bill Berry of Hot Springs Village, who is a toy collector and salesman, to purchase the Ferris wheel.

“He was kind enough to authenticate many of the toys donated for the Toys of Yesteryear project,” Goeden said. “He helped us find the Chein Ferris wheel, which measures 22 inches high.”

Goeden said the Julius Chein Toy Co. was founded in 1903 in New York.

“It produced small tin toys for Woolworth and premium pieces that were found in Cracker Jacks. It also produced tin banks, airplanes, games, trains and, of course, this Ferris wheel.”

Carol Moseley of Little Rock, past president of the Arkansas Questers, also attended the recent meeting.

“These ladies from the Vapor Valley Chapter have collected toys from all over the place,” Moseley said. “One of the special things about this chapter is that they are all retirees from all over the country who have adopted Arkansas. They’ve brought their stuff with them and have been happy to share it with the whole state.

“We are so happy that they accumulated more than 80 pieces for their project. Most [of the toys] were donated by people who just wanted to do something worthwhile. We are so proud of them; they have worked so hard.

“But they didn’t stop with this project, and because of that, they now have this Ferris wheel as a capstone for the toy collection. It’s such a worthwhile project.”

The Questers international organization began in Philadelphia in 1944. The Arkansas Questers organization was chartered in 1980 and has 14 chapters, including the Vapor Valley Chapter, which was started in 1997.

Members of the Questers organization focus on research and study of antiques, historic preservation and restoration, as well as education.

For more information on the Vapor Valley Questers, contact Goeden at (501) 922-3157 or bkgoeden@aol.com.

The Hillary Rodham Clinton Children’s Library and Learning Center opened at 4800 W. 10th St. in Little Rock in March 2013. Not only does it house a large children’s library; it also has a teaching kitchen, a garden and a theater that seats 200 people.

McClure said items in the Toys of Yesteryear collection are rotated every few months so something new can be seen frequently. The entire collection may also be rotated throughout the Central Arkansas Library System, which includes 14 libraries throughout Pulaski and Perry counties.

“This collection means a lot to us,” McClure said.