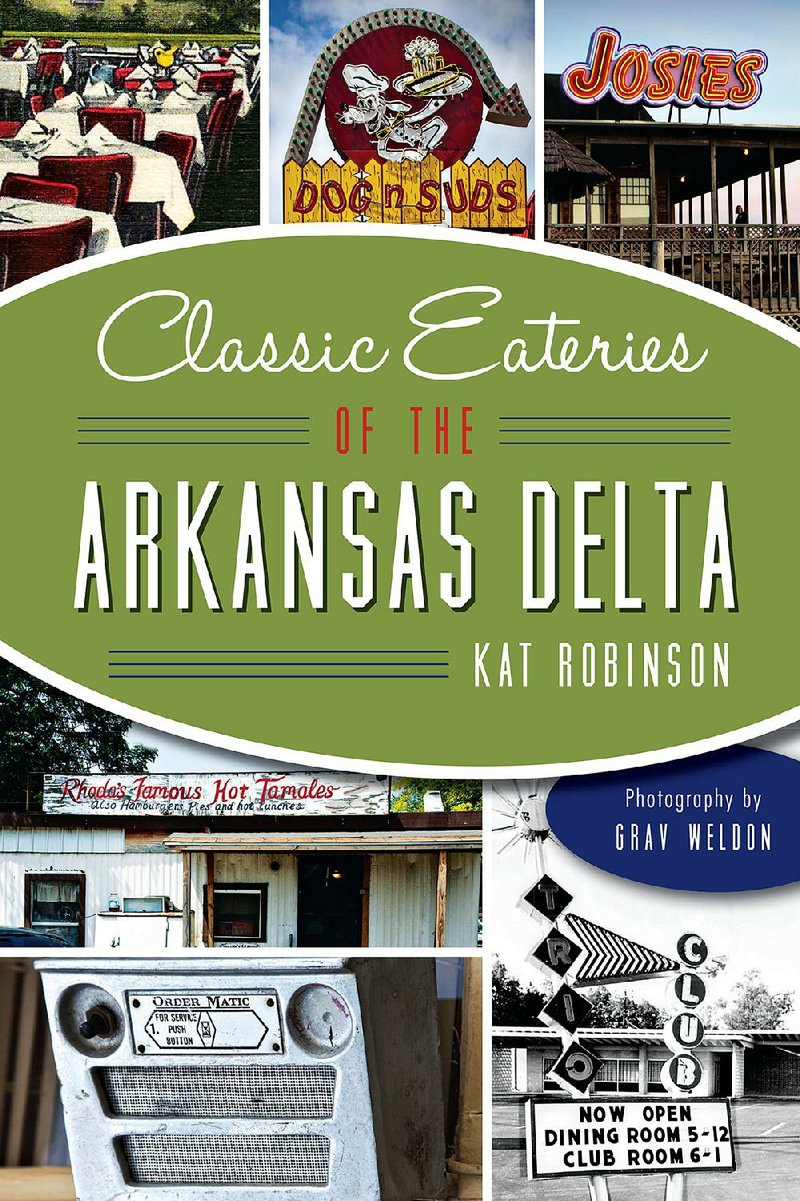 Classic Eateries of the Arkansas Delta by Kat Robinson

Food and travel writer Kat Robinson continues to eat her way across the state.

Classic Eateries of the Arkansas Delta, which came out Oct. 28, is her third book for History Press Inc., under its American Palate imprint. (It's available, $19.99, through historypress.net or classiceateries.com.)

It follows in the footsteps and format of 2012's Arkansas Pie: A Delicious Slice of the Natural State and 2013's Classic Eateries of the Ozarks and Arkansas River Valley, with salutary and "saliva-tory" photography by Robinson and Grav Weldon, and a few recipes for good, er, measure.

The 208-page soft-cover tome covers about 100 restaurants in the eastern part of Arkansas, from Lake Village to Blytheville, including the Pic-Nic-Ker Drive-In (Dumas) and Dog n Suds (Paragould), plus non-Delta nods to Batesville (including a squib on Josie's at the Lockhouse), England (Spradlin's Dairy Delight, possibly the place where the Frito chili pie was invented in 1957) and Searcy-based Yarnell's Ice Cream.

Robinson's definition of a "classic" restaurant comes close to the way some folks define "classic" for cars.

"All the restaurants in the book are 20 years of age or older," she explains. "As a threshold, that seemed like a good mark, so that we could include places that are having an influence on the scene today and have for the past generation, like Lazzari Italian Oven in Jonesboro.

"But I also wanted to include places that have made their mark, and even add in some places that have closed, such as Shadden's Bar-B-Q in Marvell, mostly because it had a huge influence on the dining patterns of generations of Arkansans."

"The original time frame for research was going to be January-April of this year, but every weekend it was icy, snowy or rainy, it curtailed the research I was able to do," she says. "So we decided to move the debut of this book to the fall, and spent most of the summer collecting what I had not already put together.

As with her Ozarks and the River Valley book, she spent many hours and thousands of miles on the road. Unlike with Arkansas Pie, she says, "where there was a whole lot of pie-eating, this one is far more about the people who created these iconic restaurants and the history behind [them], more than the food itself."

"These are travelogues. So a person interested in experiencing the food of the Delta can start in one of the chapters and drive a highway: the Great River Road, or [U.S.] 65, or Crowley's Ridge Parkway, and experience sequentially down the road these different eateries."

Robinson says she made a few first-time discoveries, including Taylor's in Dumas, which started off as a grocery store in 1954. "It's a steakhouse today," she says, run by the second generation of the same family.

"It went from being a mercantile to a regular little grocery store, added on a liquor store next door, and then they realized over time that there were more people coming in for the cheese dip and the sandwiches than were coming in for the groceries.

"So just a few years ago, they closed the liquor store, started putting in a restaurant, knocked out the walls and they have this full-scale steakhouse now, and it's one of the finest steakhouses in Arkansas."

Robinson, a former TV news producer, left a day job at the state Parks and Tourism Department about three months ago to become the research fellow for Arkansas for the Southern Food and Beverage Institute, which dovetails nicely with her freelance food writing and her blog, TieDyeTravels.com.

"It's a calling," she says. "Over the past year I realized how much I missed writing for a living.

"I'll start work on the fourth book" -- tentatively titled Classic Eateries of Southern and Western Arkansas -- "in January, but I'm taking a little break before I jump back in."

"Little Rock will be the last one. I've been collecting information for some time. Little Rock is really its own book."

Tentatively titled Classic Eateries of Greater Little Rock, "it will include everywhere up to Conway and Cabot and down to pretty much the Pulaski County border. Because it's going to be so big, Benton and Bryant are going to be in the Southern and Western Arkansas book."