Theory of Everything a glossy but dull bio-pic 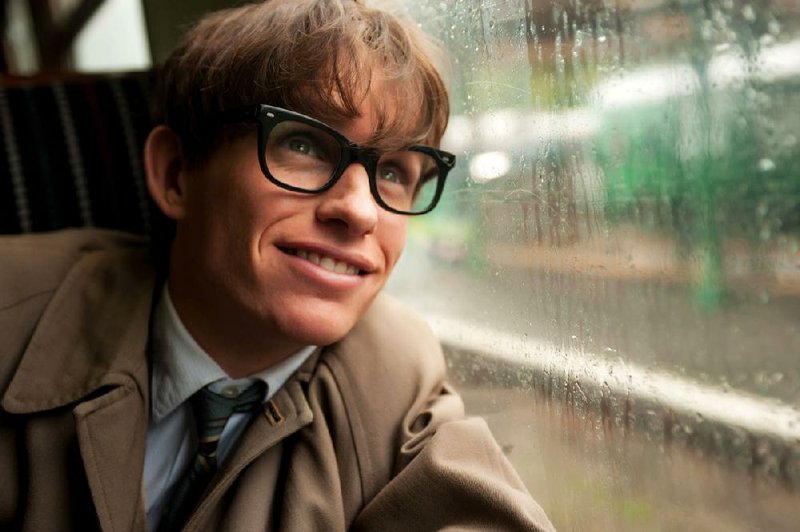 Stephen Hawking (Eddie Redmayne) is a young astrophysicist in love in James Marsh’s glossy The Theory of Everything, based on a memoir by Hawking’s first wife.

Great performances aren't generally enough to elevate dull movies. Morgan Freeman felt so credibly menacing as the pimp Fast Black in 1987's Street Smart that Pauline Kael began her review of the film with the question "Is Morgan Freeman the best actor in America?" (Spoiler alert: She thought he was.)

Still, no one remembers Street Smart these days. But if they do, they remember it as the movie that established Freeman as an actor of the first rank.

The Theory of Everything

Rating: PG-13, for some thematic elements and suggestive material

Acting is rarely the problem with Hollywood movies. There are lots of highly capable actors available for casting. But actors work with the material they're given, and while most of them will tell you they value good scripts above all else, the truth is everyone has a mortgage and bills to pay. There aren't enough good scripts to meet the demand of either actors or moviegoers. And so we settle -- actors for paychecks, moviegoers for handsome spectacle. We get used to the overt, unsurprising rhythms of big Hollywood stories, to the extent that we might feel frustrated when a movie doesn't answer all the questions it raises.

Our cinema is dull because that's what we're willing to pay for -- we want soothing movies where middle-brow philosophies meet middle-brow classical piano tinkling and everyone, even the tragically debilitated, is bathed in golden light. We want to be assured that the human spirit is indomitable and love conquers all.

The Theory of Everything will likely be a lot of people's favorite movie this year, and that's all right. It's built to be a lot of people's favorite movie, with its lavish cinematography and accurate costume design and even the tasteful way it allows its principals their conjugal privacy. It's very professional, very safe, and dull, but for two nearly great lead performances that transcend the Oscar-seeking template that obviously inspired them.

Still, while Eddie Redmayne, in the showy role of Stephen Hawking, the wheelchair-bound genius known for his thrilling theory of time, and Felicity Jones, in the much quieter though no less remarkable role of Hawking's first wife Jane -- are both remarkably subtle and convincing performers who deserve all the accolades and awards they're probably going to receive, they can't quite liberate the movie from its plodding conventionality.

The Theory of Everything is highly choreographed and much of the cinematography is beautiful. But it is so insistent on presenting us a storybook vision of young Britons at Cambridge. Here's Stephen, frail but not yet afflicted by his motor neuron disease, as a coxswain on a rowing team, the runt beloved by his haler teammates. Here he is, stumbling late into a graduate seminar on the highest math, having worked out (in one hungover morning) a week's worth of impenetrable problems on the back of a train schedule because of an accident with a teacup (a foreshadowing of the impending corporal betrayal). But the imp is human after all, he only managed to work nine of the 10 problems.

And here's Jane, the understated yet lovely literature student, catching a glimpse of the unkempt young scientist, glasses askew, across a crowded room. They meet with the awkward cuteness of frolicking puppies, and we're off. As the love deepens, the motor skills recede -- there are trips to unhelpful doctors, skeptical parents, canes, wheelchairs and the constant brilliance of that high-humming brain.

As good as Redmayne and Jones are, the truth is they aren't quite enough to make up for the plodding nature of The Theory of Everything, which really feels more like the best movie ever made of a Nicholas Sparks novel than a movie derived from the memoir of a woman thrown over by a rich and famous husband after she'd spent years rearing his children and facilitating his work.

I haven't read that memoir, but if it's as free of bitterness as the movie implies, then Jane is genuinely a saint. The movie can't even bring itself to suggest that maybe there's something maliciously manipulative in this Stephen Hawking -- I wasn't surprised to learn that the real Hawking endorsed Redmayne's performance as authentic ("At times, I thought he was me," the physicist wrote on Facebook). The Theory of Everything glosses over potential infidelities of both partners, barely suggesting some sort of adult arrangement between Stephen and Jane.

Save for one scene -- the film's best -- there's no implication of emotional cruelty on Hawking's part. In that scene, via the voice synthesizer on his computer, he reads a passage from his latest book to his wife, one that allows the Church of England-reared Jane a brief moment in which she can imagine he has finally rejected atheism. Then, after giving her a moment to enjoy her small victory, he announces, via his computerized voice, that he's decided to travel to America solely in the company of his nurse Elaine Mason (Maxine Peake), who would become his second wife.

The Theory of Everything glosses over that, as it does the lover Jane moved into the household after she had Stephen's third child (Jane's lover is in the film, but the relationship is portrayed as chaste and chivalric) and as it does Hawking's work. Judging from this movie, you'd think Hawking was primarily interested in proving or disproving the existence of God, while in fact, those sort of questions have little bearing on his work.

While Redmayne and Jones work some beautifully subtle stuff in between the dialogue they're contracted to read, it often feels as though the rest of the movie is playing defense against them. Almost everything about The Theory of Everything seems designed to elicit the good will of the people who make up the Academy of Motion Picture Arts and Sciences. It is well made, middlebrow and "classy" in the tradition of tear-jerking Hollywood behemoths. It is the sort of movie that people who don't pay all that much attention to movies automatically identify as "a great movie." It is kind of a bore that hits all the predictable notes at all the predictable times, reassuring its audience that however bleak things may seem at the time, the world is indeed a wonderful place.

No matter how much of this story is true, the movie is a pretty lie.

Print Headline: Pretty predictability/Theory of Everything a glossy but dull bio-pic