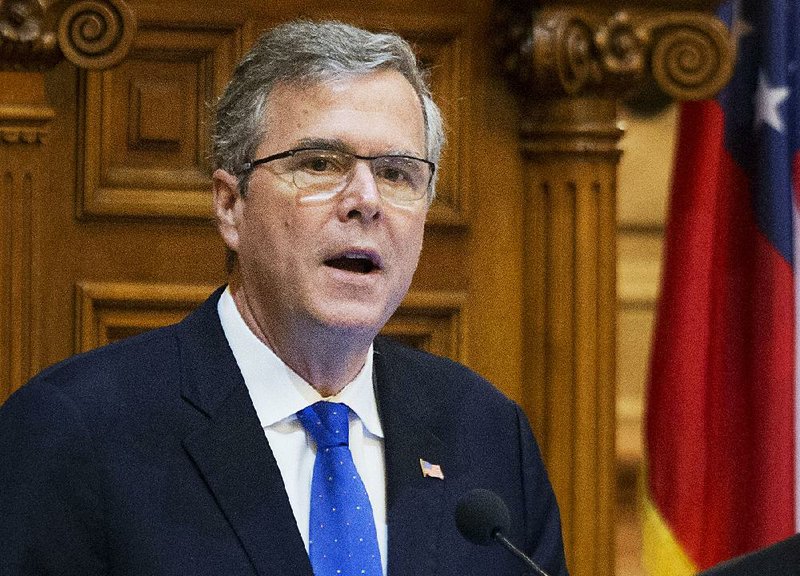 In this March 19, 2015 file photo, former Florida Gov. Jeb Bush speaks to lawmakers on the Georgia House floor in Atlanta.

Correction: In early February, Bill Simon, the former president and CEO of Wal-Mart U.S., formed Right to Rise Policy Solutions, a nonprofit corporation, according to public records in Arkansas. This Washington Post article about the nonprofit and Simon's relationship with potential Republican presidential candidate Jeb Bush did not make clear that Simon had been head of a division of Wal-Mart Stores Inc.

WASHINGTON -- A nonprofit group that can collect unlimited amounts of money in secret was quietly established in Arkansas in February by a friend and former staff member of Jeb Bush ahead of the Republican's expected White House bid. 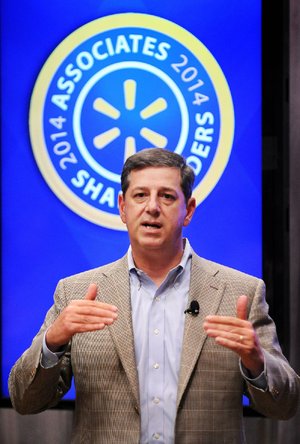 The group, Right to Rise Policy Solutions Inc., shares the name of two political committees for which Bush has been aggressively raising money -- blurring the line that is supposed to separate a campaign from independent groups.

While ideological nonprofits have become major players in national politics in recent years, this marks the first time one has been so embedded in the network of a prospective candidate.

Election law experts predict that the creation of the Bush-allied nonprofit will prompt other 2016 contenders to adopt the tactic, injecting more secret money into the political process.

"If it looks like a good idea, others are going to copy it in short order," said Kenneth Gross, a Washington campaign finance attorney and former associate general counsel of the Federal Election Commission.

Supporters of stricter enforcement of campaign finance rules said the move raises serious legal questions, such as whether the group could later be considered affiliated with the eventual campaign or viewed as an entity established by Bush. But other legal experts said the operation could be designed to avoid those pitfalls.

Aides to Bush, a former Florida governor, declined to comment on the new group.

"These questions are premature and speculative, as Gov. Bush is not a candidate for office at this time," said his spokesman, Kristy Campbell.

In early February, Bill Simon, a former chief executive of Wal-Mart, formed Right to Rise Policy Solutions as a nonprofit corporation in his home state of Arkansas, according to public records.

Simon served as head of Florida's Department of Management Services during Bush's second term as governor, and the two remain close. In recent months Simon has been helping Bush develop policy positions while also identifying potential experts to eventually join the campaign.

Simon told The Washington Post in an email that he established the group "to highlight conservative policies that will restore economic and social mobility in America. The organization will be engaged in policy generation that is consistent with Governor Bush's optimistic, conservative message and vision for the future of America."

Simon said he plans to launch a website "that will highlight conservative, reform-minded policies."

The group will make the content available publicly online. That allows the nonprofit to share information with Bush's campaign and super PAC without running afoul of tax rules, which restrict its political activity.

Simon stressed that the group will "comply with all applicable IRS regulations." While it can accept unlimited donations, he added, the nonprofit "is a policy group. Not a political or fundraising group."

The group's role as a policy hub raises questions about who will be guiding Bush's policies -- an in-house team or an outside operation. Simon didn't respond to a series of follow-up questions about the scope of his new group, including the level of Bush's involvement or whether the group plans to disclose the names of its donors.

A person familiar with the new policy organization, who was not authorized to speak publicly, said, "There is nothing wrong with a friend establishing a group to advance policy issues that he's passionate about."

Bush's legal team has responded aggressively to unsanctioned political efforts. When a supporter in Florida began running an unapproved radio ad in February touting Bush for president, he received a cease-and-desist letter from a Bush political action committee lawyer.

The creation of a tax-exempt organization closely intertwined with Bush's political operation suggests that voters may not have a complete picture of who will be financing the efforts to elect him president, critics said.

"We generally will know who the millionaires are chipping into the super PAC," said Craig Holman, government affairs lobbyist for the group Public Citizen, which advocates for greater disclosure of political financing. "But this is going to be an avenue for dark money."

Bush has tried to bolster his image as a transparent, reform-minded leader by publishing tens of thousands of emails he sent from a personal account as governor.

Bush is not the first presidential contender to have an allied tax-exempt organization.

A super PAC set up to back President Barack Obama in 2012 had a smaller nonprofit arm, Priorities USA, that ended up giving most of its money away to groups such as Planned Parenthood and Hurricane Sandy relief efforts, according to tax documents. That nonprofit has been disbanded, but the super PAC, Priorities USA Action, is poised to back presumed Democratic contender Hillary Rodham Clinton in the coming White House race.

But Bush's advisers appear to have gone further by outsourcing a specific function to a tax-exempt group.

Such so-called social-welfare groups, formed under section 501(c)(4) of the tax code, have proliferated in campaigns since the Supreme Court's 2010 Citizens United decision, which allowed corporations and unions to spend money directly on politics.

The 2014 congressional elections saw a new iteration of such organizations: social-welfare groups closely aligned with a single candidate.

The most prominent example was the Kentucky Opportunity Coalition, a 501(c)(4) that reported spending more than $7.5 million on behalf of Senate Majority Leader Mitch McConnell. The group's strategist, a Kentucky-based Republican operative named Scott Jennings, has joined Bush's PAC and is expected to serve as his campaign's political director.

Campaign finance experts said the nonprofit will draw questions about whether Bush or an agent of his could be found to have established the group. That could potentially violate the McCain-Feingold Act, which bans candidates from creating a group that raises funds outside federal contribution limits.

If Bush effectively set up the group, "I have a hard time envisioning how the (c)(4) could operate lawfully," said Paul Ryan, senior counsel at the Campaign Legal Center.

But Anthony Herman, a former general counsel of the Federal Election Commission, said that if the group was set up carefully, it could skirt such legal questions.

"I am certain with the level of sophistication of these political operatives, they will steer comfortably around the FEC," Herman said, adding: "It is very, very cleverly designed."

The close proximity between prospective candidates such as Bush and groups that will function as their outside allies has alarmed advocates of stricter campaign finance regulation.

On Tuesday, the Campaign Legal Center and Democracy 21 filed complaints with the Federal Election Commission against Bush, Santorum, former Maryland Gov. Martin O'Malley and Wisconsin Gov. Scott Walker, alleging that they have met the definition of a candidate and are violating contribution limits, among other rules.

As he has traveled the country in recent weeks to meet with Republicans, Bush often begins his speeches by maintaining that he's not officially a presidential candidate. But, he adds with a shrug, he is dwelling on the "possibility of considering the possibility of running."