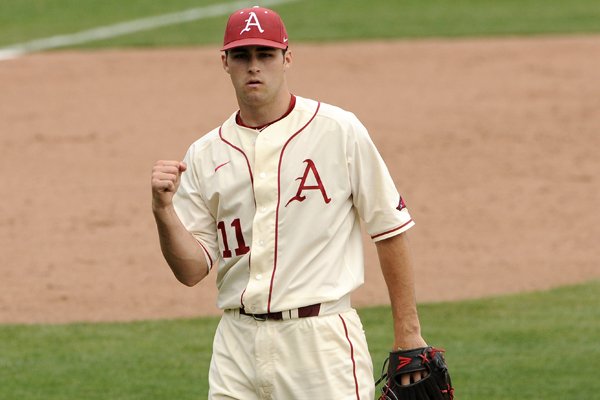 Arkansas pitcher Keaton McKinney pumps his fist in victory after the Razorbacks' 7-3 win over Kentucky on Sunday April 12, 2015.

Not even a two-hour weather delay could slow Arkansas down Sunday.

The Razorbacks took a 1-0 lead two batters into the game ahead of a two-hour, six-minute lightning delay. When play resumed, Arkansas added five runs before the end of the inning en route to an 8-2 win over No. 1 Texas A&M.

Arkansas (24-17, 9-9 SEC) scored six runs in the final three innings in the continuation of a game that was suspended because of thunderstorms Saturday night to win 9-8 and force the rubber match.

About two hours after the final out of that game, Clark Eagan reached on an error and Joe Serrano drove him in with a double.

Turning Point: Arkansas scored six runs in the first inning, which was delayed more than two hours because of lightning.

Notable: The Razorbacks beat a No. 1 team in a weekend series for the first time since 2007.

Up Next: Arkansas will host Mississippi State for a three-game series beginning next Friday night.

Following another two-hour break, this time because of the weather, Andrew Benintendi drew a walk and Tyler Spoon laid down a bunt single to load the bases.

Two-run singles by Luke Bonfield and Brett McAfee opened up the game and forced the Aggies to remove their starter, Matt Kent, whose ERA ballooned from 3.12 to 3.96. Michael Bernal added an RBI double to cap the scoring in the first.

That was plenty of support for Keaton McKinney, who won his second straight start. After tossing a complete game in the series-clinching win over Kentucky last week, McKinney gave up two runs in 5 1/3 innings against Texas A&M.

He allowed seven hits and four walks, but was able to work out of several jams.

The Aggies (34-5, 13-5 SEC) loaded the bases with one out in the second and got a run on a sacrifice fly by J.B. Moss, but that was it. They also stranded a runner in the third, fourth and fifth innings.

Texas A&M loaded the bases again in the sixth and added a run on an RBI single by Moss, forcing Arkansas coach Dave Van Horn to pull McKinney and insert reliever Zach Jackson.

Jackson limited the damage by getting a pop out and strikeout to end the inning. He earned his fifth save of the season when he got Ryne Birk to strike out after a pair of two-out walks.

The Razorbacks got insurance runs in the fourth and sixth, on a sacrifice fly and RBI single, respectively, by Spoon.

He finished the game 2-for-3 with two RBIs and one run scored. Benintendi had a pair of hits, as well, going 2-for-2 with two walks, two stolen bases and two runs scored.

By winning the game, the Razorbacks handed the Aggies their first series loss of the season.

It was Arkansas' first three-game series win over a No. 1-ranked team since winning two of three against Vanderbilt in 2007. The Razorbacks also swept a two-game midweek series against Arizona State in 2009.

Since starting the season 12-13 overall and 1-5 in conference play, Arkansas has won 12 of its last 16 games and eight of its last 12 SEC games.