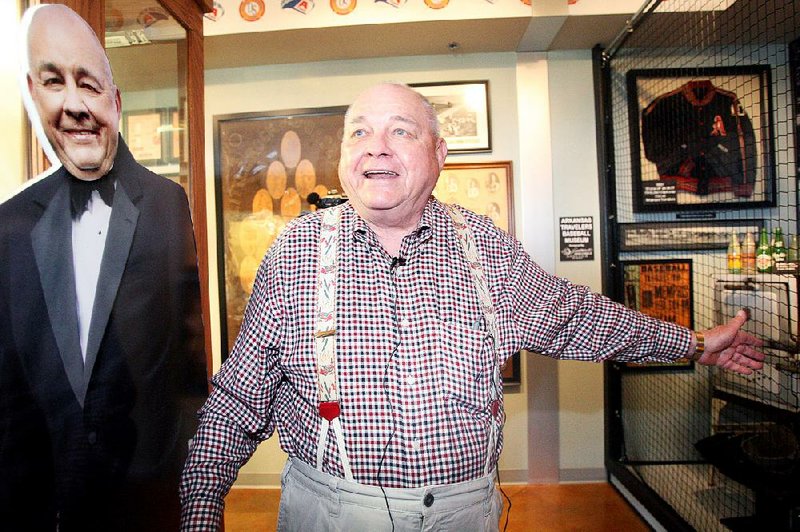 He was the larger-than-life figure that greeted generations of baseball fans at the gates of Ray Winder Field wearing suspenders and handing out scorecards. He was the umpire who ejected Earl Weaver and Mickey Mantle. He was the man who brought Rosco Stidman, Captain Dynamite, midget wrestlers and Clunker Car Night to Little Rock.

Bill Valentine, whose contributions over five decades in the game were so well thought of he was named "King of Baseball" last winter, died Sunday morning in Little Rock after a short bout with cancer. He was 82.

Known in part for his colorful suspenders and at times just as colorful language, Valentine, born in Little Rock seven months after Ray Winder Field opened, spent 35 years as the Arkansas Travelers general manager, attracting scores of fans through unique promotions that led to attendance booms in the 1980s and 1990s.

Valentine also spent five years as an American League umpire in 1963-1968, a tenure that included his working the 1965 All-Star game and ended when he was fired not long after trying to start an umpire's union in 1968. His contributions to baseball were as varied as what one would see on a given night at Ray Winder Field, as some former players disagreed with his candidness, others appreciated his interest in the game.

"He appreciated how baseball was played, and hoped it would always be played correctly," said Tom Kayser, President of the Texas League since 1992. "Sometimes he would question how it was going on the field, but I think that was momentary. His most important goal was to keep the Arkansas Travelers as a healthy, viable business, so that Arkansas and Little Rock would always have baseball."

Baseball, Little Rock and Valentine were intertwined for almost a century.

Valentine worked at what was then known as Travelers Field as a boy, selling concessions and working in the clubhouse. He went to Bill McGowan's umpire school on money given to him by his grandmother after graduating from North Little Rock High School. He graduated second in his class in 1951 and became a Minor League umpire for 12 years. His contract was purchased by the American League in 1963, where he would return home with stories of his adventures in major league cities with his friend, the late Jim Elder, an Arkansas Sports Hall of Fame broadcaster who would later call Travelers home games.

Susan Elder, Jim Elder's daughter, remembers her father and Valentine drinking whisky sours and telling stories of some of baseball's biggest names of the day.

"Bill would come over to dinner and it would be a big deal," Elder said. "My dad would get out the blender and made whiskey sours and we would all listen to Bill and he would be smoking on a cigar and telling us stories about the major leagues. He was just a link to a wider world."

Valentine became Travelers' general manager in 1976 and his focus was on the fans. The first home game at the post, Valentine introduced fans to Roscoe Stidman, who stood 3-foot-5 and led off for the Travelers that night. Valentine later brought out Captain Dynamite, who locked himself inside of a coffin along with sticks of dynamite. That gimmick was so popular that it was repeated twice each year for two decades and became one of the centerpieces for what Valentine dubbed "The Greatest Show on Dirt."

Kayser credits Valentine not only for introducing creative promotions to Little Rock, but to minor-league baseball in general. Kayser remembers attending the baseball's Winter Meetings in the late 1970s and attending a seminar on promotions led by Valentine.

"There were not a lot of people doing what Bill was doing as early as he was doing it," Kayser said. "Anything that would entertain fans and was unusual, Bill tried it."

"Bill ran the team like he was an umpire, like he was the crew chief," said Phil Elson, the Travelers' radio broadcaster in 2001-2014 who remained close friends with Valentine and visited with him on Friday, two days before his death. "He had the final word and if you didn't like it you could get the f*** out."

Paul Allen began working for the Travelers in 2005, returned in 2007 and became its general manager in 2013. Some of the promotions Valentine created in the 1980s at Ray Winder, are still staples at Dickey-Stephens Park. Midget wrestlers will return Aug. 15 and Clunker Car Night is set for Aug. 27.

"He was the ultimate promoter," Allen said. "He's a big part of the history of Traveler baseball."

Valentine cared about onfield product, too. Elson said he remembers many nights at Ray Winder Field where both kept each other at the park well past the shutting of the lights swapping thoughts of the game and critique of the current team.

That's why Jim Riggleman said he never clashed much with Valentine. Riggleman first arrived in Little Rock as a player for the Travelers in 1976. He said Valentine helped him find a place to live and did so again when he returned as a manager in 1985-1988.

Riggleman said he and Valentine could discuss the game for hours.

"You could talk strategy with him, and players could vent to him about how things were going with the ball =club," Riggleman said. "Some of my most enjoyable years in baseball were in Little Rock, and Bill was a big part of that."

Valentine's final decade as Travelers' general manager were marked by two of the club's most seminal moments: the breaking of the player development contract with the St. Louis Cardinals and moving to North Little Rock.

The Cardinals' increasing displeasure with the condition of Ray Winder Field was well documented, and in 2000, Valentine signed a player development contract with the Anaheim Angels, an affiliation that remains today. Elson said Sunday that he remembers overhearing an executive board meeting in 2003 or 2004 in which Valentine told board members that "it was time to talk about trying to get a new ballpark."

That came in 2005, when citizens of North Little Rock voted on a sales tax increase to finance the building of Dickey-Stephens Park near the Arkansas River. The park opened in 2007, Ray Winder Field was left vacant for five more years before being razed in 2012.

"He took absolute delight in the planning and development of that facility," Kayser said. "He really did feel that once that ballpark was open that secured baseball in Little Rock for generations."

Valentine stepped down as general manager in 2006 and became its executive vice president and chief operating officer, a post he held until March 2009. Valentine became distant from the team in his later years, only making sporadic appearances at Dickey-Stephens Park, once for Game 5 of the Texas League Championship Series in 2013 and he was a part of the team's All-Star festivities last year.

Valentine, a member of the Arkansas Sports Hall of Fame and Texas League Hall of Fame, continued to serve as the Texas League's vice president until his death, and last December, was named "King of Baseball" during baseball's winter meetings, an annual award given to an executive for service to the game.

It's a title that won't be disputed in his hometown.

"It wasn't just professional baseball or minor-league baseball, "Elson said. "It was the game itself that he was a symbol of. And that's partially what makes him such an icon for the sport in Arkansas. He transcends different parts of baseball to being just part of the game and the progress of baseball in the state of Arkansas."

Valentine was preceded in death by his first wife Ellouise, and survived by wife Nena. Ruebal Funeral Home of Little Rock is handling the services, which are pending.