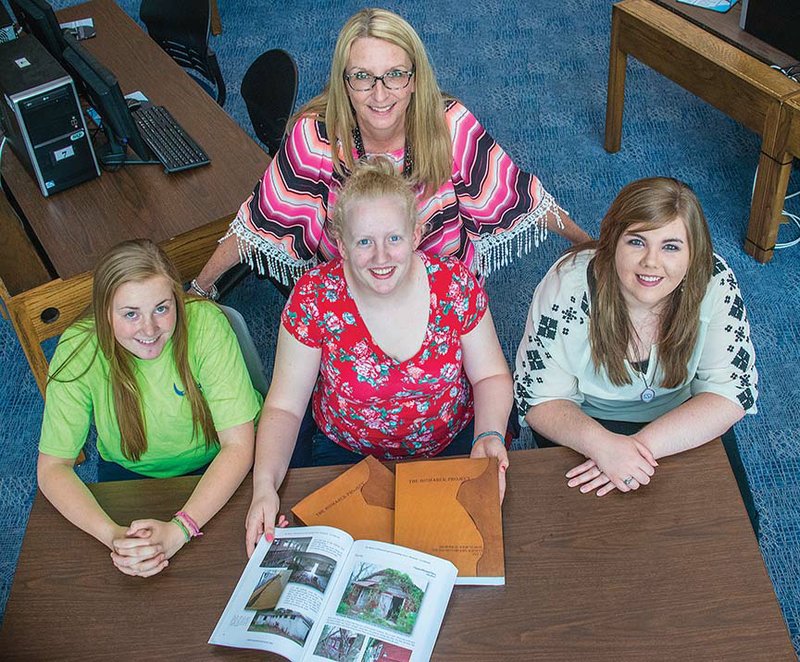 Morgan Cooper, sitting, from left, Taylor Rynders and Sarah Smith show copies of The Bismarck Project, which they helped compile. The book is on the history of Bismarck and surrounding areas. Standing with the students is Cindy Bubulka, Bismarck High School librarian.

Every community has a history. Much of that history is often passed from generation to generation by word of mouth, never being formally recorded. But thanks to the Bismarck High School Young Historians Society, many of Bismarck’s stories have now been recorded for posterity.

Under the guidance of Robin Piper, retired librarian at the local high school, members of the Young Historians Society have published The Bismarck Project: The History of Bismarck and Surrounding Areas of Antioch, Beaton, Caney, DeRoche, Jack Mountain, Marcus, New DeRoche, Oak Bower and Point Cedar, More or Less.

Members of the society, which was organized in 2014, included Ashlee Carter and Lee Hodges, who graduated from Bismarck High School in May; Jared Colllins, Miki Fendley, Amber Nicks, Rachael Rowland and Sarah Smith, who are seniors this coming school year; Morgan Cooper, who is a rising sophomore; and Taylor Rynders, who is a junior this year.

The large soft-cover book, which was published on April 13, contains more than 400 pages. It can be purchased for $40 at the school library, which is open from 9 a.m. to 2 p.m. on Tuesday through the summer or during regular school hours after school starts. All proceeds from book sales will benefit the library.

In late May, Cindy Bubulka, current librarian at the Hot Spring County school, said the sale of the book was going well.

“I can’t keep it in stock,” she said with a laugh, adding that she orders only a certain number of copies at a time. “It’s been a good seller. It’s amazing how many people come in and request it,” Bubulka said. “Some say, ‘I wish I had known. … I would have submitted my family’s story.’ Some have asked if there would be a second book.”

Those who want to purchase a copy of The Bismarck Project can contact Bubulka at (501) 865-4541 or cindy.bubulka@bsd-lions.net.

Bubulka said a DVD featuring interviews with local residents was also made. She has copies of the DVD as well.

Smith said she never realized “how big [the project] would be.”

“Ms. Piper asked me if I would like to work on the

project and I said, ‘yes,’” Smith said as she discussed how the project evolved.

“We first made pamphlets for the community to use to give us their family information. After we collected the information, Ms. Piper put it into the computer,” Smith said.

“I worked on the pictures of the old Hodges house. He was the only doctor at the time. His family brought in a lot of old pictures,” Smith said.

“It’s the first history of Bismarck. That’s why it’s so popular,” Rynders said.

“I loved working on it. It made me feel important. I would definitely make another one,” Rynders said.

“Most of the people [who worked on the book] were seniors,” Cooper said. “I was the youngest one. I loved working with everyone.”

Cooper said she worked on the maps that are featured in the book.

The Ross Foundation provided the money for the mini-grant that Bismarck received to make the Bismarck Project happen.

“Each year, the Dawson Education Cooperative receives $15,000 that teachers from the Arkadelphia, Bismarck, Centerpoint, Gurdon and Ouachita school districts are eligible to apply for,” said Billie Garlin, who is an administrative assistant at Dawson and works with the Ross Foundation. “These school districts have the opportunity to submit as many mini-grant proposals as they wish. Each applicant must submit an application that includes a rationale, a brief description of the need, objectives and assessment, main objectives and evaluation of the grant.

“We have a team of five people that consists of a retired principal, two retired counselors and a representative from the school of education at both Henderson State University and Ouachita Baptist University that read all the applications, then choose the top applications that fit the criteria. The goal is that these projects will be something that broaden and enrich the students’ learning environment. With the increasing number of students and the decreasing amount of additional funding, this mini-grant gives the local educators the opportunity to produce lifelong learners and impact their communities,” Garlin said.

“It is a pleasure each year to see what the applicants accomplish with the money they receive and the wonderful projects that are completed,” Garlin said.

“We were so impressed with the information the students gathered and put together in The Bismarck Project,” she said. “The book is wonderful.”