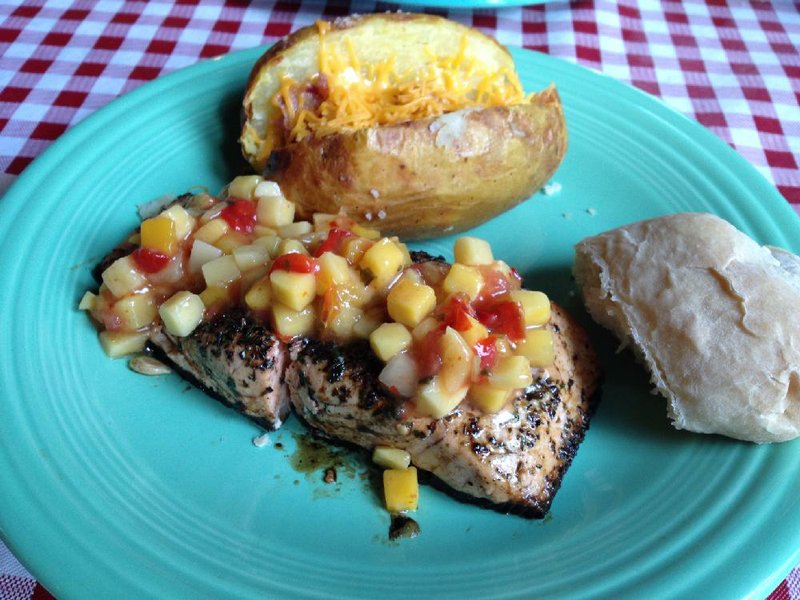 “Surf” at Fresh: An Urban Eatery is a 4- or 8-ounce salmon plank topped with mango salsa, plus a baked potato and an artisanal roll. ( Arkansas Democrat-Gazette / Eric E. Harrison)

Fresh: An Urban Eatery has a mission of sorts: "to prepare a fresh, quality meal for you in a casual, friendly and inviting environment," using, whenever possible, "local ingredients, meats, breads and produce."

The restaurant is a mom-and-pop operation that took over the long-vacant former OW Pizza on West Third Street near the state Capitol. Pam Jones (mom) and Phillip Naylor (pop) have been feeling their way through some opening-month-plus skids, gaffes and glitches, and there have been some major menu and hour shifts. But they're steadily learning and the place has been improving.

A fresh coat of green paint has brightened up the walls and they've done some corrugated metal work on the space that frames the partly open kitchen, but the place is still a bit dingy. It's dimly lighted, depending on the time of day (the windows all face south). And some of the holdovers from OW Pizza's decor don't help, particularly the well-aged (some might unkindly use the word "shabby") plasticized red-and-white- checked tablecloths, many of which have sprung "leaks" through which tufts of fabric sprout.

There's a new limited-offering salad bar on the west wall, and a most unusual adjunct: a hands-free hand-washing station in the dining room, so folks can have a place to lave their hands before using it. Not a bad idea, because the only access to the restrooms is to exit the building and go around to the side. (It will, perhaps, surprise no one, given the architecture only partially enhanced by a brick facade, that the building originally housed a gas station.)

Service involves ordering and paying at the counter, getting a number and having a staff member, sometimes a waiter, sometimes the person who cooked it, deliver your food from the kitchen.

We were not much impressed by the atmosphere (on a couple of visits, a boombox delivered a satellite contemporary country soundtrack, including plenty of Shania Twain and Alan Jackson; on a later stop, it was playing somewhat more digestible oldies), but we were generally impressed by the food.

Fresh's hand-crafted sandwiches, on sourdough or multigrain bread, seemed at first glance to be a bit pricey at $7.99, but they're pretty big, and you can top 'em with lettuce, tomatoes, onions, pickles, mayonnaise or mustard, or, for an extra buck and in season, fresh avocados. Cheese choices include pepper Jack, cheddar, Swiss, American and goat. They come with chips; a nicely tangy, house-made, skin-on potato salad; or fresh carrot sticks. Or, if you'd prefer, add a trip down the salad bar ($7.99 a la carte) for an additional $2.99.

Our first bite of the Mediterranean Tuna left a slightly bitter aftertaste; after that, though, we reveled in the nontraditional, mayonnaise-absent melange of tuna, black olives, olive oil, artichoke hearts, parsley and fresh basil and oregano that clung lovingly to the sourdough bread. And we didn't miss the mayonnaise one bit.

Fresh's Classic Chicken Salad includes herb-roasted chicken, Parmesan cheese, fresh basil and, adding a nice textural dimension, celery and sliced almonds. The result is good but not as exciting as we expected, from those components, that it would be. Of course, chicken salad is rarely even this exciting, so any thrill at all is a bonus. But we sort of got tired of it about two-thirds of the way through. We got ours with a slice of Swiss cheese, which did not enhance it much.

We also enjoyed a recent daily lunch special, a hummus, goat cheese and roasted red pepper sandwich. Maybe it might make its way onto the menu at some point. Other sandwich choices include roasted chicken, roast beef, ham, turkey and a signature pimento cheese.

The original plan was that Fresh, which inherited OW's pizza ovens, would offer pizza by the slice, but instead they make 8-inch, single-topping personal pies ($5.99). Though the menu promises thin crust, our mushroom pizza was just a bit bready, but it had a nice tangy red sauce (pesto and olive oil are the other choices) and a thick layer of what appeared to be melted mozzarella. Additional toppings, including black olives, bell peppers, pepperoni, pineapple, onions, beef, Italian sausage, bacon, Canadian bacon and roasted chicken, are $1 each.

A few weeks after opening, Fresh shifted its hours from breakfast-lunch to lunch-dinner, but their erstwhile breakfast items are still available "anytime we're open." We liked the 8-inch Breakfast Pizza ($5.99), adding sausage to the egg-cheddar topping, but it wasn't a very good choice for a to-go breakfast, considering it took almost 15 minutes for it to come out of the oven.

Fresh shone most in what we had there for dinner, starting with a Stuffed Mushrooms appetizer ($7.99), six fresh, medium-size caps topped with a simple but delicious mix of cream cheese and bacon. Splitting it seemed like a good idea when we ordered it, but we would have been even happier if we'd gotten a whole order apiece.

We were better pleased with our "Surf," perfectly cooked Atlantic salmon, moist and flaky, topped with a mango salsa (available in 4- and 8-ounce portions, $11.99 and $16.99, respectively), than our "Turf" -- the 4-ounce filet ($9.99; an 8-ounce filet is $15.99) came out nicely seasoned but a lot closer to medium than the medium rare we ordered and it was consequently just a little tough. Both come with a fresh artisanal roll and a buttered baked potato (for another 50 cents, you can get it loaded with butter, cheddar, sour cream, bacon bits and shallots).