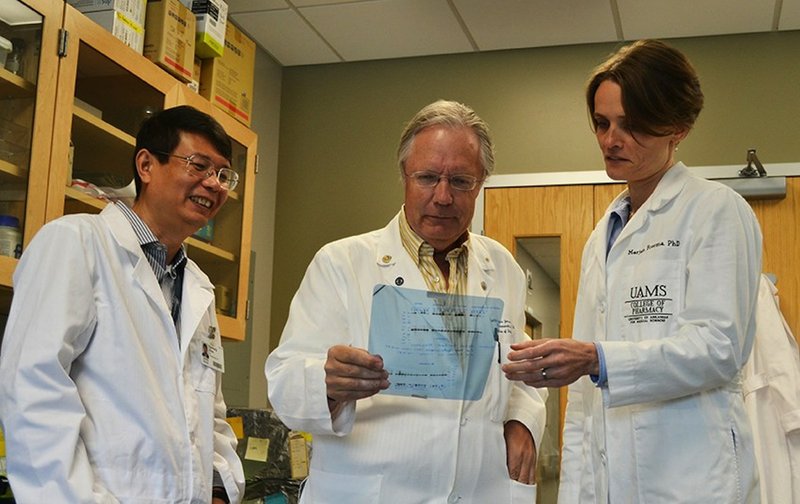 Dr. Martin Hauer-Jensen, director of the UAMS Center for Studies of Host Response to Cancer Therapy, center, looks at lab data on a transparency along with Dr.s Daohong Zhou, left, and Marjan Boerma, right. ( UNIVERSITY OF ARKANSAS FOR MEDICAL SCIENCES )

The University of Arkansas for Medical Sciences announced Wednesday that it has secured a $10.5 million grant that will go toward a center to study cancer therapy effects.

The Center for Studies of Host Response to Cancer Therapy will focus initially on post-radiation therapy side effects, with plans of expanding studies to chemotherapy and other forms of cancer therapy.

Researchers secured the grant from a program of the National Institute of General Medical Sciences, the Centers for Biomedical Research Excellence.

"To our knowledge, this is the first center dedicated to proactively minimizing the impact of cancer therapy-related toxicities," Dr. Martin Hauer-Jensen, who will serve as the center's director, said in a statement. "This is the most important grant I've ever been involved in because it provides the opportunity to help the next generation of researchers become full-fledged, independent investigators."

The grant will be given out over five years with possible renewal for two more five-year periods.

As part of the project, the center will collaborate with other research programs on campus such as the Winthrop P. Rockefeller Cancer Institute.

"The center's collaboration with the Cancer Institute at UAMS is particularly important given that the institute is the state's only comprehensive cancer treatment and research facility and serves patients from every Arkansas county, all 50 states and about 40 foreign countries," UAMS Chancellor Dr. Dan Rahn said.

Internally, UAMS has committed $2.5 million over five years toward the project.