No arrests in 3 nights, Ferguson off red alert

In a formal indication that tensions in Ferguson, Mo., had eased since an outbreak of gunfire Sunday night, the St. Louis County executive on Friday rescinded the emergency declaration that he had issued because of "criminal unrest." 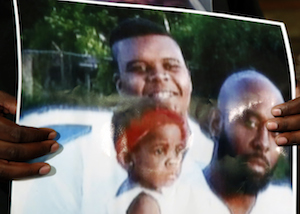 The decision by the executive, Steven Stenger, had been widely expected after nights of limited protests and no arrests, and it mostly affected the scores of law enforcement officials who had been assigned to police demonstrations in Ferguson.

Stenger's declaration of emergency, issued Monday, had placed Jon Belmar, St. Louis County's police chief, in charge of emergency operations in the city of about 21,000 people.

"After reviewing the events of the past four evenings under the state of emergency, I am pleased to report our law enforcement officers have established order while preventing further acts of violence in Ferguson," Stenger said in a statement. "Local law enforcement will remain vigilant, and officers are prepared to respond swiftly if necessary."

Ferguson's mayor, James Knowles III, had suggested Tuesday that county officials be judicious about lifting the emergency declaration, after Stenger initially said it could be lifted as early as Wednesday.

Stenger's decision, announced Friday morning, was among the signals that fear of widespread unrest had lessened significantly since Sunday night, when several gunshots were fired along West Florissant Avenue.

An 18-year-old, Tyrone Harris Jr., was wounded by plainclothes county police detectives who said he had opened fire at them. Police officials said Friday that Harris was in stable condition at an area hospital.

The shooting and a subsequent video of Harris -- prone, handcuffed and wearing a bloodied shirt -- on social media provoked new concern about turmoil in Ferguson, the scene of occasionally violent protests and National Guard deployments after the Aug. 9, 2014, death of Michael Brown. Brown, a black 18-year-old, was killed by Darren Wilson, a white Ferguson police officer. Looting, arson and intermittent gunfire followed a St. Louis County grand jury's decision in November not to charge Wilson, who later resigned.

Although 22 people were arrested Monday night, confrontations between protesters and police were fleeting. On Tuesday night, officers and demonstrators generally kept their distance from each other, and there were no arrests or reported injuries. Police also reported no arrests Wednesday and Thursday nights.

Many people who stood Tuesday night among longtime Ferguson protesters simply milled about in a parking lot. Demonstrators blocked traffic on West Florissant once -- Belmar was among the officers who moved into the roadway to clear the protesters -- and sometimes revived the chants that were so common here last year.

As the protesters marched by on the sidewalk, a handful of police officers stood back and watched. Almost none of them lowered their face shields.

The news website Vocativ.com, citing personnel records obtained under a Freedom of Information Act request, first reported that Anderson was suspended three times from the Glendale Police Department during a period of less than one year in the late 1990s. Vocativ also reported that Anderson was served with an order of protection in 1996 by a woman who claimed he struck her in the face.

Anderson declined an interview request. But the city of Ferguson released a statement defending him.

"The allegations regarding Chief Anderson allegedly striking a woman are more than 15 years old, were unfounded and thus never led to criminal charges being filed," the city's statement read.

The statement said the city typically does not comment on personnel issues. It did, however, address one matter from Anderson's Glendale files -- a finding that he falsified documents.

"In that instance, Chief Anderson provided information on a mileage report in error, not out of an intentional, malicious action," the city said.

Anderson, who is on leave from the Arizona department while he works in Ferguson in suburban St. Louis, has been promoted several times in Glendale and his records show generally favorable, sometimes glowing, reviews. But he was suspended without pay for two days in December 1996, eight days in July and August 1997, and two days in September 1997.

No reasons were cited for the 1997 suspensions. The 1996 suspension was the result of problems that occurred while Anderson served on a Drug Enforcement Administration task force. A performance review showed that he was found to be conducting personal business on city time and falsifying official documents. It wasn't clear if the falsification was the mileage issue cited by Ferguson officials.

Anderson, a 50-year-old black man with 25 years of law enforcement experience, was hired in July to lead the roughly 50-member police force in Ferguson.

Anderson is still a member of Glendale's department. City officials in the Phoenix suburb have said that Anderson is using vacation time, then unpaid leave through January.

Information for this article was contributed by Alan Blinder and Mitch Smith of The New York Times and by Jim Salter of The Associated Press.

Print Headline: No arrests in 3 nights, Ferguson off red alert