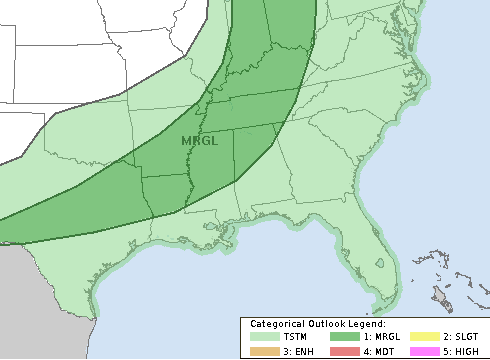 This National Weather Service map shows a large part of the country, including much of Arkansas, under a marginal risk for severe storms.

Much of Arkansas is said to be under a marginal risk for severe storms as a cold front moves into the region Wednesday.

The National Weather Service said thunderstorms will likely develop as the front moves through and some could turn strong or severe. Central and southern Arkansas are more likely to see stronger storms than other parts of the state, the agency noted.

"However, the overall threat for widespread hazardous weather will remain low," the weather service said in a statement. "There may be some locally heavy rainfall, but any flash flood threat should be isolated."

The Storm Prediction Center has southern, central and northeast Arkansas under a marginal risk for severe weather Wednesday. That's the lowest ranking for potential severe storms and warns of the possibility of isolated severe storms with 40-to-60 mph winds and hail up to 1 inch in diameter.

The cold front is expected to stall in the region, keeping chances for thunderstorms in the forecast through Friday, and another cold front will usher in more rain chances over the weekend and next week, forecasters said.

Cooler temperatures are also forecast. Highs Thursday across the state are expected to largely top out in the upper 70s or low 80s.