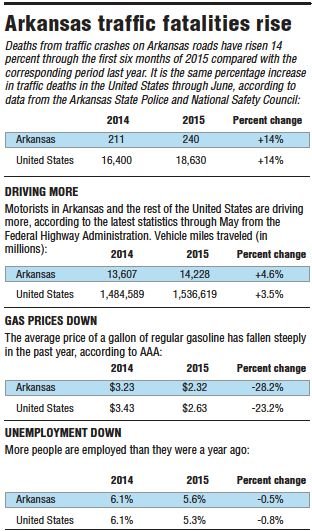 This year is shaping up to be the deadliest on the nation’s highways since 2007.

In the first six months of 2015, the number of fatalities in traffic crashes on America’s roadways has jumped 14 percent, a pace mirrored on Arkansas highways, according to the National Safety Council.

“Follow the numbers: the trend we are seeing on our roadways is like a flashing red light — danger lies ahead,” Deborah Hersman, the council’s president and chief executive officer, said in a statement last week.

The nonprofit organization says its mission is to save lives by preventing injuries and deaths at work, in homes, and communities and on the road through leadership, research, education and advocacy. Among the issues on which it has focused in recent years have been teen driving and cellphone use while driving.

The council said many factors could contribute to the high death toll this year, but it noted that more miles are being driven on the nation’s roads, thanks to falling gas prices and an improving economy.

“Average gas prices are 30 percent lower than they were in 2014 and are projected to remain relatively stable heading into 2016,” the council said. “This generally means an increase in traffic; more people can afford to drive, and many travel longer distances and take vacations.”

The increase in crashes also resulted in 2.2 million people seriously injured and an estimated $152 billion bill for the deaths, injuries and property damage, according to the council.

It wasn’t that long ago that Arkansas officials were touting the decline in the death toll on state roads, including a 12.5 percent drop in 2013 that pushed the annual traffic fatalities below 500, marking the lowest level in 50 years. At the time, they attributed it to safer roads and vehicles, tougher laws and improved trauma care.

“What it tells me from an overall standpoint, our safety program is working,” Scott Bennett, the director of the Arkansas Highway and Transportation Department, said in January 2014 about the previous year’s statistics. “It’s just not infrastructure. It’s working on the human element. It’s legislation. It’s health, the statewide trauma system. Law enforcement. First responders.”

The same month, state officials gathered at a news conference to highlight the state’s participation in a national Toward Zero Deaths campaign to end deaths on the roadways.

To be sure, they said, Arkansas still had a long way to go. Despite the decline that year and last, the state’s traffic fatality rate remained above the national average. And Arkansas motorists lag behind motorists in other states when it comes to seat-belt use, according to state police, who say seat-belt use is at 77 percent, nine points below the national average.

And nationwide, roadway crashes remain the leading cause of death in children and adults younger than 45.

“Right now we’re in the corner of increased volume,” said Bill Sadler, a spokesman for the Arkansas State Police, the agency whose troopers work the majority of the crashes. “We’re aware the numbers have been moving upward.”

The state’s toll for August was 42 fatalities for the month as of Saturday. For the year, according to state police preliminary reports, the state has had 330 fatalities and is on pace to finish with more than 510.

The first quarter of this year was especially deadly, when 116 people died in car crashes, nearly 40 percent higher than the first three months in 2013. The 44 deaths in February were the most for that month since 2009, and more than 12 above the February average for the past five years.

Probably no one is more cognizant of the toll than Capt. Forrest Marks. He is the interim commander of state police Troop K, which is based in Hot Springs and is responsible for patrolling highways in Garland, Clark, Grant, Hot Spring, Montgomery, Pike and Polk counties.

This month, his troopers have worked crashes involving eight fatalities, including five in a four-day span last week. One of the most recent happened at 6:45 a.m. Friday when a 1991 Pontiac Bonneville that was traveling west on U.S. 70 in Montgomery County crossed the centerline and struck the trailer of a Mack truck, which was traveling east on the highway.

The crash killed 30-yearold Michael Bradshaw of Glenwood, the driver of the Pontiac.

“We wear them [deaths] on our sleeve,” said Marks, a 20-year veteran of the agency. “It’s very sad. I remember every single one I worked.”

He and other troop and division commanders have discussed the increase.

“I wish I could put my finger on it,” Marks said. “They just seem to be random so far.”

Friday marked the beginning of a statewide initiative the state police will use to target drunk drivers, which will last 17 days and into the Labor Day weekend. City and county law enforcement agencies also will participate, the agency said.

Drunk driving has been declining, but the agency said it remains a factor in more than a quarter of the deaths on state roads.

“Driving with a [blood-alcohol concentration] of .08 or higher is illegal in every state,” Col. Bill Bryant, the state police commander, said in announcing the initiative earlier this month. “Yet we continue to see far too many people suffer debilitating injuries and loss of their loved ones as a result of impaired driving.”

But Hersman of the council said motorists need to be better attuned to the dangers of the road.

“Be a defensive driver and make safe decisions behind the wheel,” she said. “Your life really depends on it.”