Trucking film to have state flavor 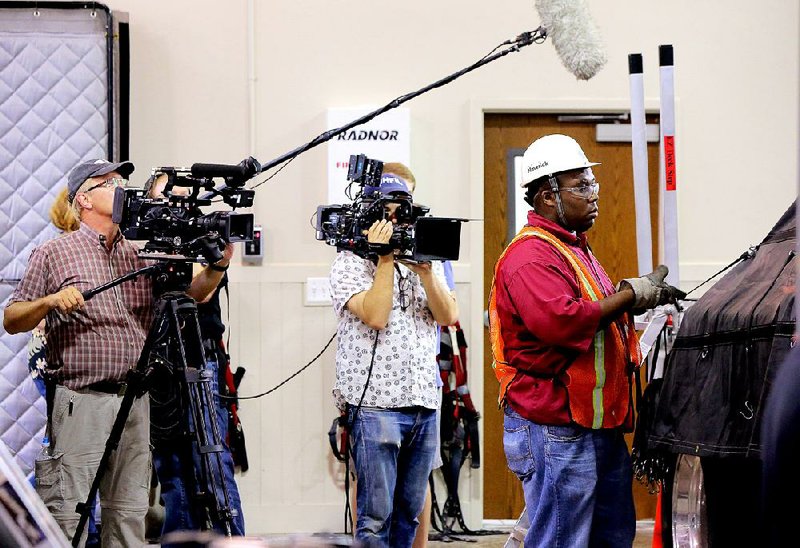 A film crew records Maverick USA trainer Kevin Wade as he secures a load to a flatbed trailer. 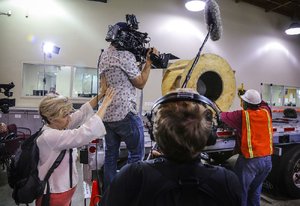 Photo by Stephen B. Thornton
Jennifer Clymer, executive producer, supports a cameraman as he films Maverick USA trainer Kevin Wade securing a load to a flatbed trailer. Clymer is producing a documentary about challenges facing the trucking industry.

The filmmaker, who was in town working on a documentary, was waiting for her room when she spoke briefly with two men checking out. Clymer asked why they were in town and wondered what they did for a living.

"One of the gentlemen said, 'I'm in the freight industry,'" Clymer said. "I said, 'Oh my God. I love truckers.' He went, 'What? That's not something commonly heard.'"

The quick conversation was the beginning of a collaboration between Clymer and Williams, who hope to shed more light on the challenges facing the freight industry and the impact on the country through a full-length documentary.

The film, Be Prepared to Stop, is in the early stages of production and should have plenty of Arkansas flavor after Clymer -- the film's executive producer -- and the rest of her crew spent three days in Little Rock last week.

Williams said he provided the initial money for the project and has taken an active role in raising additional funds for the film, which will highlight trucking topics like the nation's crumbling infrastructure, a shrinking driving force and safety-based technology. Clymer, whose film credentials include award-winning short documentaries, was motivated to make the movie as a way to honor her grandfather -- a truck driver who taught her about the transportation industry.

Williams and Clymer are optimistic the documentary will educate the general public about trucking and some of its biggest issues, including the ongoing long-term highway funding debate, in a new way.

"It was exciting. It was different," Williams said. "It's something that a person in trucking wouldn't normally add to the rest of their regular duties. 'Today we're going to make a documentary.'

"But at Maverick, and me personally, we've kind of led the charge on doing things a little bit differently."

Williams and Maverick helped steer the crew to Arkansas, which is one of several places the documentary crew plans to film in the next few months. Marijane Miller, producer and co-director of the film, said the state was an easy choice because of its well-known transportation companies.

J.B. Hunt Transport Services Inc., ArcBest Corp., USA Truck, P.A.M. Transportation Services Inc., and Maverick all rank in the top 100 of the Transport Topics' list of largest for-hire carriers. The trucking industry in Arkansas provided more than 83,000 jobs, or one out of 11 in the state, in 2013.

Miller also said the central location fit their plans to document an industry that produced $700.4 billion in revenue nationwide in 2014, according to the American Trucking Associations.

"So many, many, many of the things we get come from trucking companies here in Arkansas," Miller said. "This is where you want to start."

The documentary crew spoke with drivers from Maverick and Con-way Freight during their stay. They met with Williams, Maverick Vice President of Safety Dean Newell and other company employees as well.

Miller said in an email the crew was attracted to Maverick because of its "willingness to try new things and seek out technologies and methods that benefit their company and, most importantly, the safety of their drivers and those with whom they share the road." She also credited Williams for his leadership at Maverick and throughout the industry.

It's no surprise the need for long-term highway funding -- and the growing frustration because of a lack of solutions -- was a big part of their conversations. Clymer described collapsed bridges and deteriorating highways as a "nationwide problem" because of its widespread effect on the industry.

"The idea for me to be able to impact positive change by telling this story of what's really happening, the history of our roadways and the current condition of them," Clymer said. "The only way that's going to change is for people to learn about it and feel engaged around the issue, that's kind of what we're doing.

A three-month extension of the current highway funding bill -- the 34th consecutive patch approved by Congress since 2009 -- was passed at the end of July. The Senate approved a six-year plan before its August recess, but the bill has not been taken up by the House.

"We have really been asleep as a country on the challenge that we face," said Williams, who has been a vocal proponent of raising the fuel tax for highway funding. "So I wanted to try to give them a picture of how bad things are going to get if we don't invest in infrastructure. There's consequences to this and it's not just driving around a pothole."

Clymer and Miller plan to have the film completed and available for viewing at film festivals or through a television connection in time for the 2016 election cycle.

They're also tinkering with the idea of taking the film from town to town by showing it in an 18-wheeler transformed into a small movie theater.

"It's not just going to be statistics," Clymer said. "It will be entertaining first and foremost because, ultimately, it's a movie. You want to spend two hours of your time, an hour-and-a-half, however long the final movie will be, being enlightened, being engaged, but also being entertained."