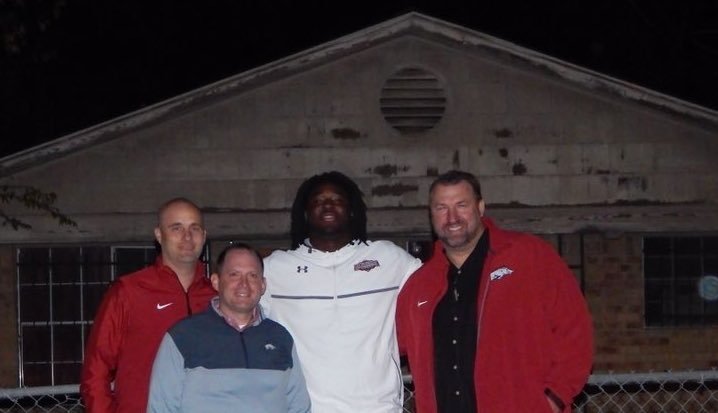 In his earlier years, Agim and his family lived off and on with his grandmother, Charlie B. McGraw, who passed away four years ago. In September, he announced his commitment at her house.

He showed the Razorback coaches the Texarkana home where so many memories still remain and helped shape him into the person he is today.

“It was letting them see first-hand what I came up in and see the situation,” Agim said. “That’s my motivation. Like you don’t have to worry about me. I’m going to be on it.”

“We didn’t say much, I just told them the background,” said Agim, who will officially visit Fayetteville this weekend. “I feel like they understood.”

Agim, who was named the Gatorade Arkansas Player of the Year on Thursday, recorded 72 tackles, 22 sacks, 13 pass knockdowns, 6 forced fumbles and 3 fumble recoveries as a junior.

As a senior, he had 75 tackles, 34.5 sacks, 11 tackles for loss , 8 quarterback hurries, 9 pass breakups and an interception. Out of the Wildcat formation, he rushed 21 times for 184 yards and 8 touchdowns. He also had 8 catches for 97 yards and a touchdown.

He appreciated Bielema, Smith and Lunney spending much of the day with him and seeing the house.

“They were in awe seeing it,” said Agim, who also had 8 kickoff returns for 406 yards and a touchdown. “You can see crackheads nearby. You can see it was tough growing up there. I felt like they understood. They didn’t have to do that."

Agim plans to sign a Financial Aid Agreement with the Hogs and enroll in January. He may also practice with Arkansas during bowl preparation in Fayetteville.

“We were talking about me getting up there as quick as I can,” said Agim, who will play in the Under Amour All American game in Orlando on Jan. 2.