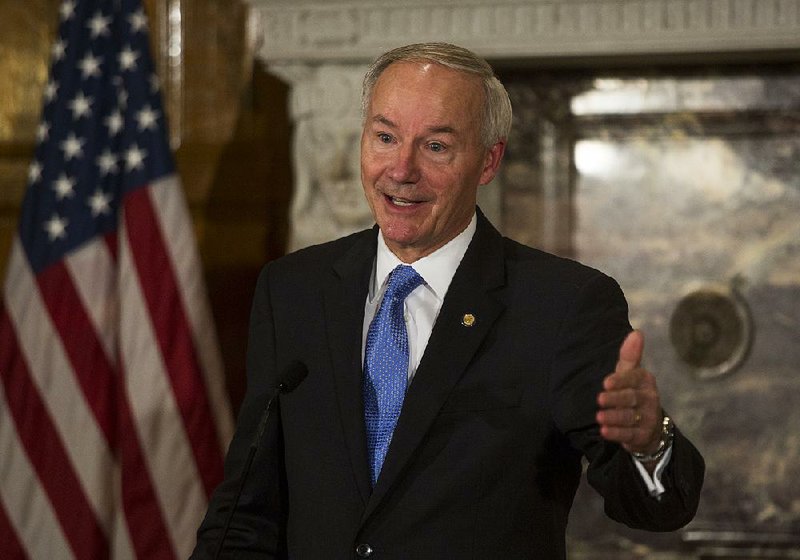 In this file photo Gov. Asa Hutchinson answers questions regarding an announcement of a trade mission to Japan and China during a press conference at the State Capital November 6, 2015.

Gov. Asa Hutchinson said Tuesday that he wants Arkansas to impose "lockout" periods for private-option participants who fail to pay their insurance premiums.

The state also should "fight" to gain federal approval to consider applicants' assets, as well as income, in determining eligibility for coverage, the governor said.

And he expressed support for offering vision and dental benefits to certain enrollees to encourage work or healthy behavior and for charging premiums or copayments to enrollees with incomes below the poverty level.

"Everybody needs to have some incentive and investment in their own health care," Hutchinson said, addressing an annual conference of Medicaid providers at the Embassy Suites in Little Rock.

All of Hutchinson's proposals came from a consultant's report to a legislative task force in October. The governor previously has endorsed other proposals contained in the report from The Stephen Group.

Many of the recommendations would require approval from the federal Centers for Medicare and Medicaid Services.

The state Legislature created the program in 2013 as a primary way of extending coverage to adults with incomes of up to 138 percent of the poverty level: $16,243 for an individual, for instance, or $33,465 for a family of four.

A legislative task force was formed earlier this year, at Hutchinson's request, to recommend changes to the state's Medicaid program, including a replacement for the private option that would start on Jan. 1, 2017, when Arkansas will begin paying a portion of the cost of its expanded Medicaid program.

The state's share will start at 5 percent, then increase each year until it reaches 10 percent in 2020.

In his address Tuesday, Hutchinson mentioned changes he has previously said he wants the Health Reform Legislative Task Force to consider.

Those include subsidizing coverage through employer plans for those with access to job-based coverage, requiring enrollees with incomes above the poverty level to pay premiums of up to 2 percent of their incomes, referring unemployed enrollees to job programs, strengthening procedures for verifying recipients' eligibility for benefits, and finding ways to reduce the expenditure of state tax dollars on Medicaid by at least $50 million a year.

Establishing lockout periods for failure to pay premiums was a recommendation to the task force made in the Oct. 1 report by The Stephen Group of Manchester, N.H.

Under The Stephen Group's recommendations, enrollees who fail to meet "wellness goals" or pay premiums would be removed from the Medicaid program and be unable to regain eligibility for six months.

As was proposed by the The Stephen Group, Hutchinson noted Tuesday, that Indiana received federal approval to impose lockout periods for Medicaid recipients who fail to pay premiums.

"That's the kind of model that we can follow in Arkansas," Hutchinson said.

In a follow-up report on Nov. 10, The Stephen Group said the six-month coverage lockouts in Indiana apply to enrollees who have incomes above the poverty level.

The plan "is derived from a successful demonstration that has been in place since 2007," according to The Stephen Group report.

But the Centers for Medicare and Medicaid Services denied a request by Pennsylvania to impose similar penalties, the report says.

A Medicaid expansion waiver in Montana, approved by the federal agency on Nov. 2, allows the state to remove recipients who fail to pay premiums, but the recipients may be re-enrolled after they catch up on missed payments, according to the report.

Bo Ryall, chief executive of the Arkansas Hospital Association, said Tuesday that his group has concerns that imposing a lockout period could increase the cost to hospitals of providing unreimbursed care to the uninsured.

If recipients who are locked out of coverage "need services, their care would turn right back into uncompensated care," Ryall said.

Marquita Little, health care policy director for Arkansas Advocates for Children and Families, said lockout periods could undermine one of the private option's goals, which is to ensure enrollees are "healthy enough to work."

"I think maybe we can explore other incentives rather than a punitive approach," Little said.

Sen. David Sanders, R-Little Rock and a sponsor of the law creating the private option, said he supports establishing lockout periods, as long as the policy is implemented carefully.

"First and foremost, you have to make sure there are clear lines of communication established to the beneficiary," Sanders said.

The Stephen Group's October report also recommended charging premiums of at least $100 a month to enrollees with "substantial assets" -- for example, a house worth at least $200,000 or cash-equivalent assets of $50,000 or more.

Before he took office in January, Hutchinson said, he received a call from an insurance agent whose client was applying for coverage under the expanded Medicaid program, even though the person owned a house worth $200,000 and "a bank account in similar fashion."

He said he supports charging higher premiums to such enrollees or excluding them from the program altogether.

"I don't know whether CMS [the Centers for Medicare and Medicaid Services] would grant it or not, but I do believe we ought to fight for an asset test," Hutchinson told the Medicaid conference.

He also mentioned other recommendations by The Stephen Group, including establishing a lifetime cap on benefits, allowing the state to exit the expanded Medicaid program after 30 days' notice if the federal government begins paying less than 90 percent of the cost of the program, and eliminating retroactive coverage for enrollees.

Currently the Medicaid program pays for medical expenses incurred up to 90 days before an applicant is approved for coverage.

"Some of them are common-sense measures" needed to trim unwarranted spending or encourage employment, Hutchinson said.

The task force is expected to issue its recommendations next week.

Print Headline: In plan, no care for nonpayers