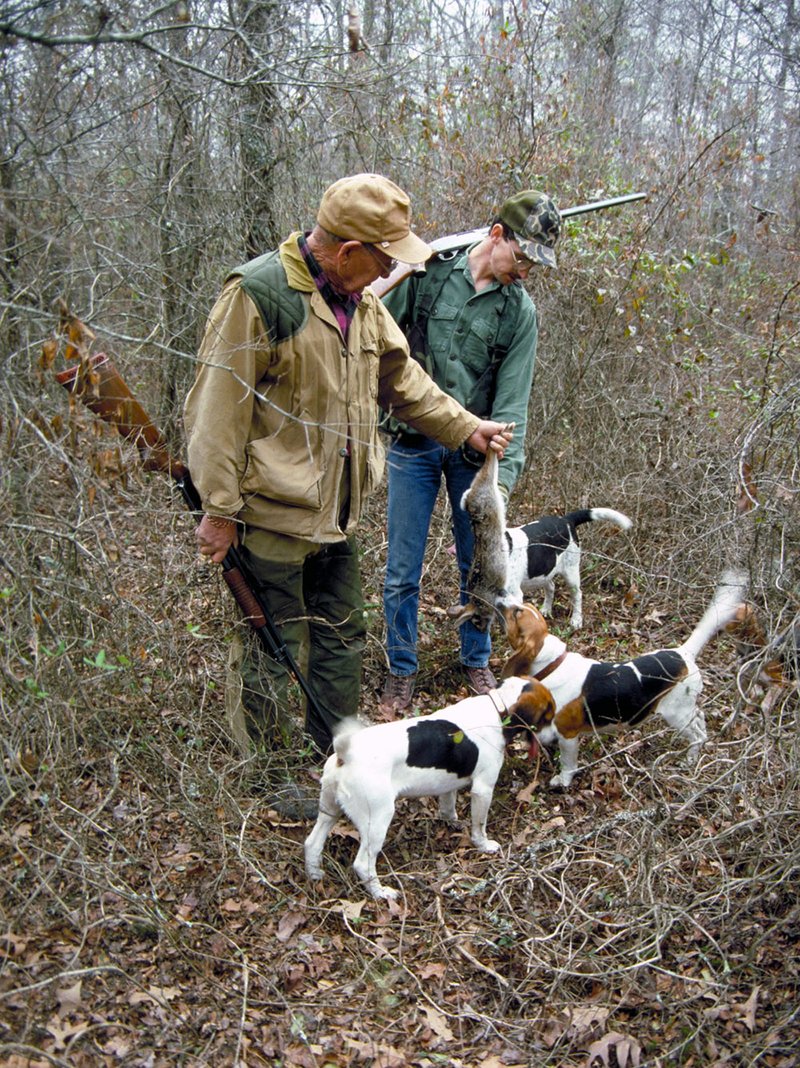 Ed Middleton and Lewis Peeler praise Ed’s dogs after a fun-filled swamp-rabbit chase in the bottomlands of eastern Arkansas.

In the corner of a fallow field, Ed Middleton and I set up to ambush the swamp rabbit. Fore and aft of us were tangles of honeysuckle, sweetgum saplings and greenbriers. To the left and right, we had an open view down 50 yards of rutted dirt road. Out in the distance, perhaps 200 yards away, Ed’s hounds sang a hunter’s tune.

Ed and I were talking when the big rabbit crossed the road.

“There that blankety-blank goes!” Ed shouted, wheeling to his right and raising his shotgun. I turned in time to see the swamper vanish in a thicket. The moment was too late, and the cover too thick to get off a shot.

I doubted this was the same rabbit the dogs were chasing, as the hounds were still quite a distance off. But this jumbo swamper soon proved me wrong.

Five minutes after we saw the rabbit, the dogs crossed the road and entered the thicket exactly where I’d last seen the bottomland bunny. They quickly doubled back and headed back across the road a few yards from where Ed and I set our ambush. While we were focused intently on the spot where we first saw the rabbit traverse the road, the swamper zigzagged back and crossed again, right behind us.

Ed decided to follow the chase and headed into the woods to join up with Jim Spencer and Lewis Peeler, the other two hunters in our party. Shortly after the three men met, the swamp rabbit presented itself for a short time again. Spencer, seeking the supreme small-game-hunting challenge, was armed only with a .22 pistol. Tat, tat, tat! the pistol cracked. Boom! Ed’s shotgun blasted.

I heard Ed call the dogs, and thinking he was calling them to the kill, I left the road and headed his direction. The rabbit, followed by the dogs, passed me as I went in. Ed was only trying to get the hounds back on track.

The chase continued. Jim and I stood in the road. Lewis was 100 yards farther down, and Ed followed the dogs. With the canines barely audible in the distance, the rabbit broke through the woods like demons were on its heels. Spencer and I fired and missed as the swamper neared the roadside. I fired a second shot, and finally, after two hours of hunting, our first swamp rabbit fell.

Swamp rabbits present the ultimate small-game-hunting challenge. Comparing these jumbo rabbits with their cousins, the cottontails, is like comparing greyhounds and Pomeranians. The two are closely related, but in many ways, swampers are vastly different from their kin.

Swamp rabbits, often called canecutters or just swampers, are more difficult to bag than cottontails. Swampers circle when chased by dogs, just like cottontails, but lead the pack much farther, covering an enormous expanse of ground that may take the beagles completely out of earshot. When a swamper shows itself, it usually happens when you least expect it. You’re wondering if the dogs will ever turn back; then suddenly, there it is, a brown sprinter against a brown background, covering 10 feet, maybe more, with each bound. Before you have a chance to raise your gun, it’s vanished.

Swampers are much bigger than cottontails, too. The smallest mature swamp rabbit is about the size of the largest mature cottontail. While the latter averages about 3 pounds, the swamper, largest of the cottontail clan, usually weighs close to 5 and is known to tip the scales at 10 pounds or more.

Swamp rabbits need wetlands to prosper. They’re usually found in stream floodplains where switch cane, sweetgum thickets and honeysuckle are abundant. They’re excellent swimmers, often taking to the water when pursued. They may dive and hide nose-up under shoreline vegetation, or swim a safe distance downstream and exit the water, attempting to throw the dogs off their track.

Much of the prime habitat once used by swamp rabbits has been destroyed by stream channelization, wetlands drainage and clearing of bottomland hardwoods. But fortunately for Arkansas hunters, floodplains in our state still harbor healthy, huntable populations.

My friends and I wound up our afternoon hunt with a grand total of four swampers. That doesn’t sound like many. But considering it was still early in the season and a bit warm and dry for good trailing, the dogs managed to put up a good supply of rabbits and lost very few. All of us managed enough clean misses to keep the shotshell manufacturers happy.

Back at the truck, Ed removed his coat and revealed a shiny black animal horn hanging from one shoulder by a worn leather strap. He sounded the horn to call the dogs, then hitched his thumbs under his red suspenders and leaned back against the pickup.

“I’ve done a lot of hunting in my time,” Ed said, “but it just doesn’t get any better than this. Nothing makes me happier than gettin’ down in these bottoms and listening to those dogs run a swamper.”

Everyone agreed. Hunting swamp rabbits is a challenging day’s sport, one that will spoil you for any other kind of hunting.