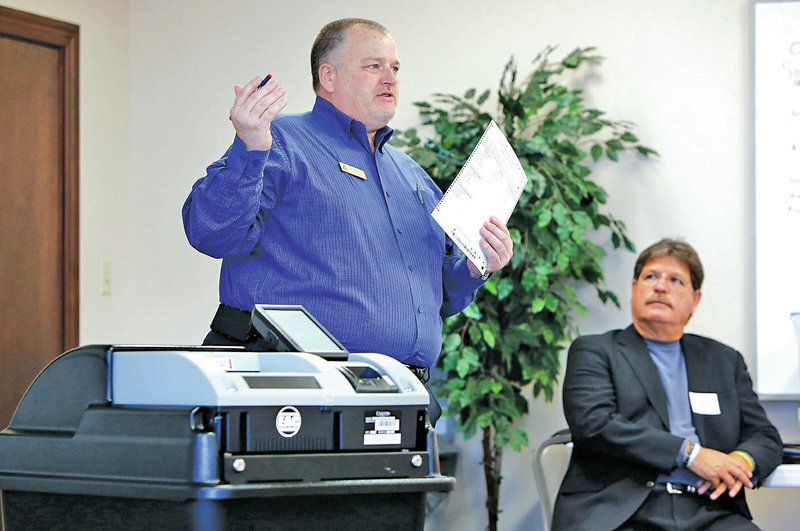 NWA Democrat-Gazette/DAVID GOTTSCHALK Paul Griego (right), with Unisyn Voting Solutions, watches a presentation by Brent Wagoner with Henry M. Adkins &amp; Son about one of three paper-based voting machines Tuesday at the Washington County Courthouse in Fayetteville. Officials and election commissioners from several counties gathered information about products available to replace the voting machines and ballot counters in use across Arkansas.

FAYETTEVILLE -- Election officials from six Arkansas counties got their first look at some of the latest voting technology during a demonstration Tuesday in the Washington County courthouse.

Unisyn is one of a handful of companies angling for the Arkansas Secretary of State's blessing as counties begin replacing decade-old voting machines before the 2016 presidential race. Tens of millions of dollars in state and county contracts are the companies' prize.

Unisyn was first through the gate in this region -- Election Systems & Software, which provided the state's current fleet of machines, and Hart InterCivic in Texas have similar meetings scheduled in the next several weeks. The companies have also met with state officials, who must approve their systems for county use.

Three Unisyn representatives said their system was built to be user-friendly even for poll workers, who are often retired and can be wary of new systems.

"It's all about ease of use for the poll workers," said Brent Wagoner, regional account manager with Unisyn contractor Henry M. Adkins & Son in Missouri. "We have a lot of flexibility with the systems."

Unisyn's system essentially blends today's paper and electronic, touch-screen ballots. Most voters would fill out a paper ballot. A machine at the polling place would then count their choices on the spot instead of all at once at the end of Election Day. A touch screen would also be on hand, mostly for visually or hearing impaired voters. It would print their votes onto tickets that would also be counted on-site.

Election officials would total memory cards from every counting machine, which could drastically speed up election night results.

"It's the fastest digital count in the market," said Paul Griego with Unisyn. "The most important thing is touch screens have gone by the wayside. This is, going forward, is what you're looking at."

Election Systems and Hart also offer combined systems, according to their websites. Suzanne Morgan, coordinator for Sebastian County, said she was skeptical of the move.

"I kind of think we're going backwards by going to paper," she said, adding election integrity is her top concern. Still, she said she was "very impressed" with the system's usability and speed. "You don't want people getting impatient with you while you're just changing a roll of (printing) paper."

A hybrid system could have prevented problems with last November's count in Washington County, said Jennifer Price, election coordinator. Tallying the vote continued past 2 a.m. the next day, which Price has partly blamed on different programs for electronic and paper ballots.

"You simply do one program, and that's it," Price said about the new systems.

The price tag is a major concern for officials. A polling site's counting machine and touch-screen machine have cost about $8,000 in other states, the company representatives said. Counties such as Washington and Benton can have 50 polling places or more, pushing the cost to nearly half a million dollars before maintenance and new personal computers. Officials from Carroll, Madison and Crawford counties also attended Tuesday's presentation.

"It's just like a new computer or a new car -- it's pretty impressive, and it's got an impressive cost to it," said Mike Sevak, Benton County election commissioner.

Price and other county officials have said the General Assembly must kick in the money, or new machinery will be impossible. The Assembly's session began last month. Gov. Asa Hutchinson's budget recommendation for the next two years doesn't mention voting equipment as a priority.

"The timetable doesn't start until the legislature approves the money for the purchase," Laura Labay, a Secretary of State spokeswoman, wrote in an email Tuesday. "Once that catalyst takes place, then its full speed ahead."