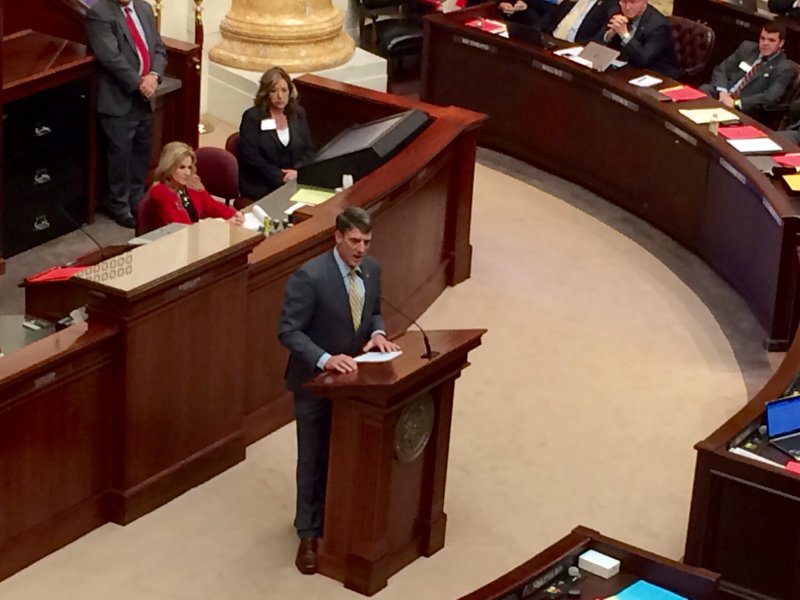 Rep. Kelley Linck — R-Flippin, presents Senate Bill 96 to end the private option at the end of 2016.

A bill to end the Medicaid private option by the end of 2016 and find another solution for the state's health-care program passed the House on Thursday.

The House passed the legislation with 80 for, 16 against and three voting present, and the bill will go back to the Senate for approval after representatives amended the bill to add co-sponsors.

Senate Bill 96, sponsored by Sen. Jim Hendren, R-Sulphur Springs, would create a task force to suggest a replacement for the private option.

Rep. Kelley Linck, R-Flippin, presented the bill to House members and noted that it ends the debate of the private option.

"The private option ends at the end of 2016 and [the bill] puts in motion a task force that figures out what do we do," Linck said. "We've got to have a healthier Arkansas before we can have a better system. People have to take better care of themselves."

Several representatives spoke both for and against the bill, challenging each other to consider promises made during campaigning to constituents.

Many who spoke against the bill said they were disappointed the private option wouldn't end sooner and that there would not be a cap placed on enrollment in the Medicaid program.

Rep. Laurie Rushing, R-Hot Springs, said that she saw SB96 as the only way to end the private option.

Rep. Donnie Copeland, R-North Little Rock, said he was voting against the bill because he feels like the private option isn't effective for any demographic.

"I would contend we got working people getting squeezed, we got poor people being squeezed," Copeland said. "This thing is rotten end to end. We need to not end, not terminate but repeal the act then start over and truly help people in this state."

Members of the House also approved SB101, an appropriation bill that includes $1.9 billion for the private-option program.

The Democrat-Gazette previously reported that the Department of Human Services estimates the program will cost about $1.62 billion in fiscal 2016.

The legislature approved expanding the state's Medicaid program eligibility in 2013 to adults with incomes of up to 138 percent of the federal poverty level.