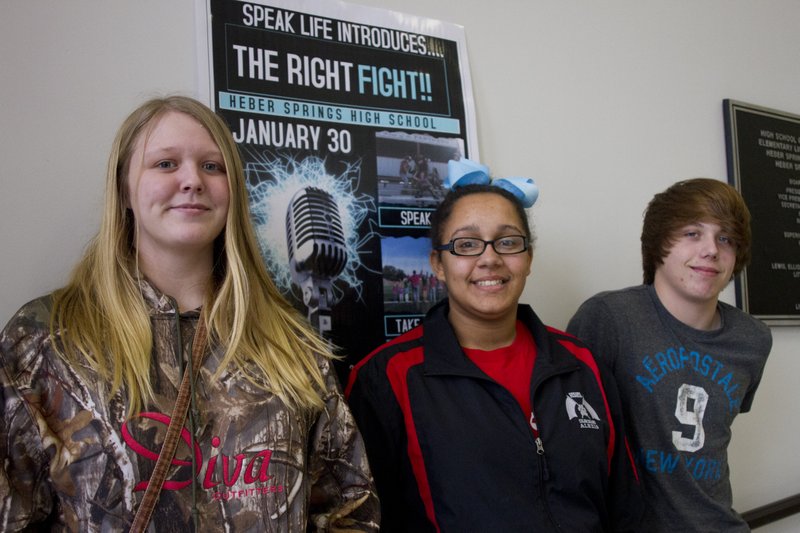 From left, Lena Tvedten, Alexis Brown and Zach Owens from Heber Springs Speak Life are just a few of the students working on the objective to end bullying in schools. Speak Life held an assembly Jan. 30, and the students will be working with school administrators to promote a positive learning environment.

HEBER SPRINGS — For some children, school is a safe place to learn and grow among friends and mentors. Other students, however, have a harder time and are forced to learn their lessons while avoiding stressful social situations brought on by bullies.

That is why a group of students in Heber Springs is making an effort to foster a safe environment through open conversations and positive interactions.

Bullying often includes rude or mean taunts that can be considered verbal abuse, but sometimes things even get physical. Last year, a bully at a Heber Springs elementary school broke the arm of another student. The girl with the broken arm was in first grade, and she was not the only one being bullied. One of her friends has an older sister — Haley Owens — who is in high school, and their mother suggested that Haley and her friends take a stand against the bullies.

Haley is part of a club at

Heber Springs High School called Teen Recruiters, which focuses on personal growth, self-esteem and service. The students in the club recently started an offshoot program called Speak Life, in which people in the schools and in the community work together to promote emotional support and motivation, especially for those dealing with bullies.

“Speak Life is about how people can speak about what’s going on and not stay bottled up,” Haley said.

Teen Recruiters dealt a little bit with taking a stand against bullying, but the students felt a concentrated program would be better to fight the problem, said Lena Tvedten, the Heber Springs Teen Recruiters’ director.

“We decided that we really needed to take action because bullying was becoming a big problem,” she said. “We presented our plan to the school board to have an assembly, which they approved. We’re also trying to develop an in-school program at the high school for people to talk about the ways they are being bullied.”

The goal of the assembly, which was held Jan. 30, was to raise awareness for Speak Life and how students are not alone when it comes to bullies.

“We want to show people that even some of the people whom you wouldn’t expect to get bullied actually do get bullied, too,” Lena said. “We want people to feel like they can come to us if they have to get something off their chests.”

Of course, there are two parties involved in bullying, and Speak Life is not just

interested in helping the victims. The group wants to reach out to bullies in the school to see if there is any way the group can help them change the way they think and act toward others.

“People that are bullies also have problems, too,” Lena said. “That is often one of the main reasons some people are bullies. They want to seem like they don’t have problems and they seem happier. We want them to be able to come to us, too.”

The students are not alone in this anti-bullying endeavor. The administrations in Heber Springs schools have been supportive of the Speak Life group, and more events are planned throughout the rest of the school year to continue promoting a positive, bully-free atmosphere.

“We’re really making an all-out effort just to address the bullying,” said Bret Brown, Heber Springs High School principal. “We need to help the bullies or those people who are promoting this negative behavior.”

On Feb. 11, the high school will host a presentation about Rachel’s Challenge, a nonprofit dedicated to creating safe school environments. The program is based on the life and writing of Rachel Scott, the first victim in the 1999 Columbine High School tragedy. The event on Feb. 11 will start at 6:30 p.m. in the gym and is open to the public.

“We’re really trying to get the community involved,” said Mandee Love, Heber Springs school resource officer. “We want to show that adults have these kids’ backs and that they’re going to stand with [the students] when they take a stand to be that positive role model and positive influence.”