Bill that bans life sentences for children tabled by panel 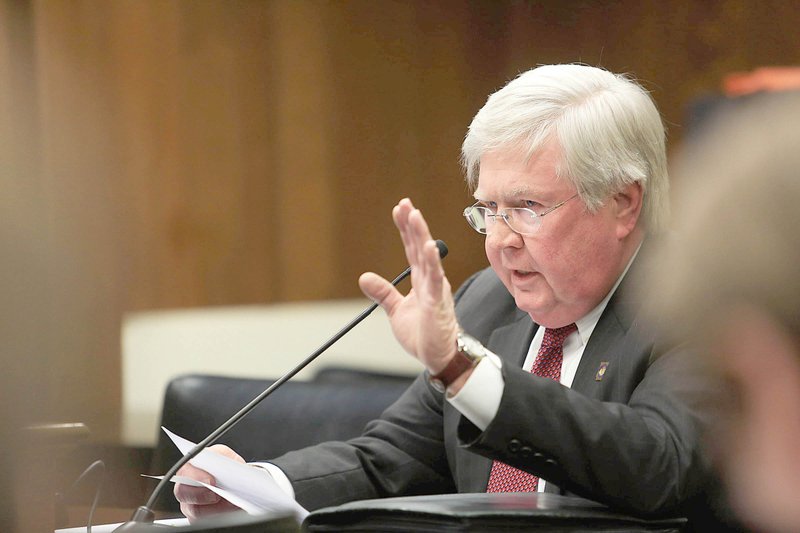 Arkansas Democrat-Gazette/RICK MCFARLAND --- 02/17/15-- Larry Jegley, Prosecuting Attorney Sixth Judicial District, speaks against a bill to allow persons under the age of 18 that were given a life without parole sentence to be eligible for parole after seving 28 years. The bill was tabled Tuesday for a later day in the House Committee on Judiciary.

Prosecutors and Republican legislators voiced opposition to a legislative proposal that would bar sentences of life without parole for convicted offenders who were under the age of 18 when they committed their crimes.

House Bill 1197, sponsored by Rep. Greg Leding, D-Fayetteville, as well as by Sen. Missy Irvin, R-Mountain View, would change the state sentencing laws by striking the possibility that a juvenile offender could receive a life sentence without parole.

The bill, as written, would apply retroactively.

On Tuesday, Leding told members of the House Judiciary Committee that the United States is the only nation in the world that allows for a life sentence with no parole for juvenile offenders. He said many states, including Kansas, Kentucky and neighboring Texas, have all passed similar laws banning life sentences for children.

According to Arkansas Department of Correction officials, 56 inmates were sentenced to life without parole for murders committed when they were younger than 18.

Appearing with Leding was James Dold, an advocate with the Campaign for the Fair Sentencing of Youth, who said that the issue was not only a "moral" one in giving the nation's youngest offenders a chance at life after making a severe mistake, but a "legal" lens as well.

A string of U.S. Supreme Court cases over the past 10 years culminated in the 2012 ruling in Miller v. Alabama, which also included the case of an Arkansas man, Kuntrell Jackson, who was convicted and sentenced to life in prison for his involvement in a robbery-murder where 14-year-old Jackson stood as a lookout.

The nation's highest court found that a teenager's mind was still developing and still lacking certain capabilities. It found that a life sentence with no parole for children was unconstitutional and violated the protections against cruel and unusual punishment in the Eighth Amendment of the U.S. Constitution.

"[The Supreme Court] says age is more than just a 'chronological fact.' ... [Juvenile offenders] are not fully developed. They're more susceptible to peer pressure. ... They make bad decisions," Dold said. "No child is born bad and shouldn't be discarded for life."

In 2013, Arkansas legislators passed Act 1490, which barred mandatory life sentences without parole for youthful offenders, a fact that state prosecutors feel is enough to stay compliant with recent federal rulings.

Rep. Rebecca Petty, R-Rogers, was one of several Republican legislators to voice concern about the bill. In 1999, her daughter was abducted and murdered by a family member whose death sentence is still going through a legal challenge.

"I have been a victim [of violent crime] for 15 years. If the guy that had murdered my daughter had gotten out and everybody said, 'It's all gonna be OK' ... I'm having real trouble with this," she said. "I do appreciate what you're doing here, but I'm having a hard time with this one."

Larry Jegley, the Pulaski County prosecuting attorney and head of the Arkansas Prosecuting Attorneys Association, said that all 28 of the state's elected prosecutors stand firmly against ending the option of life sentences for children charged and convicted with the most heinous crimes.

Jegley said that prosecutors already consider the circumstances surrounding a juvenile offender, including his mental development, and that the passage of HB1197 would strip Arkansas juries of their charge to administer justice.

"[Sentencing] is a jury's decision," Jegley said. "It's not mine, not the judge's; it's the jury's choice."

Jegley also said he thought that the bill's language to retroactively apply parole eligibility to convicts serving life sentences would be a slap in the face to families of victims.

Following two hours of discussion, the committee agreed that the issue needed more discussion and voted to table the legislation until a later date.

Leding said the bill had enough votes to move through committee but that there were some questions raised by legislators -- and prosecutors -- that needed ironing out, and that some changes may be made to the legislation in the coming days.

"There were some inaccuracies [brought up by prosecutors] we'd like to address. ... Obviously there was some powerful testimony on both sides, and [legislators] would appreciate more time to discuss the issue," Leding said. "Retroactivity is one of the larger obstacles. ... I want to be very clear that no one who supports this bill is in anyway indifferent to the victims."