At LR’s Welspun Tubular, he promises to hand-deliver letter to president by Emily Walkenhorst | February 18, 2015 at 3:20 a.m. 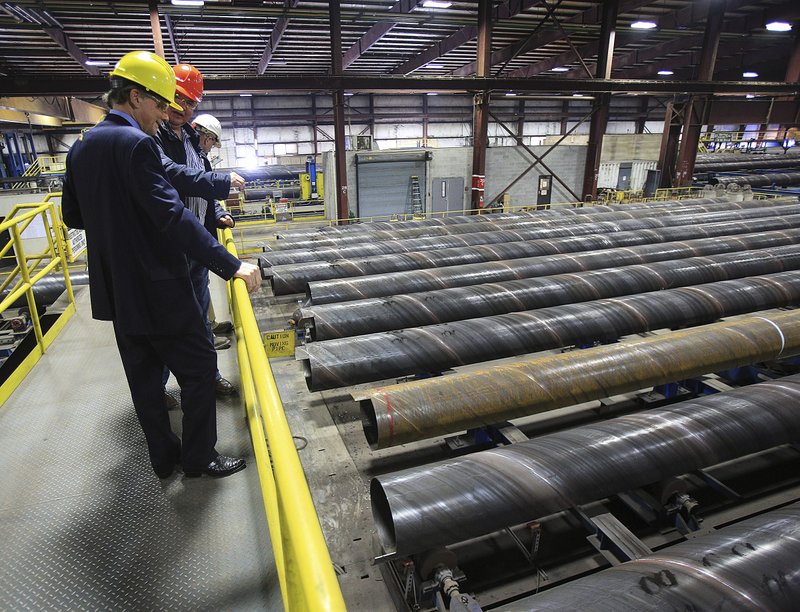 It's been a week since Congress -- including all six of Arkansas' House and Senate delegates -- approved legislation to construct the long-debated oil pipeline extension that would run from Canada to the Gulf Coast. That bill also endorses climate change as a reality and an end to exempting oil sands -- which would be used in the project -- from a tax used to clean up oil spills.

Hill spoke on the House of Representatives floor Feb. 11, urging President Barack Obama not to go through with his promised veto of the bill.

On Tuesday, the Republican said he hopes Congress has enough votes to override a veto but is first hoping that Obama chooses not to veto the legislation.

"I hope that because of the popularity of our goal ... we'll be able to find enough votes in the House and Senate to override a veto," he said.

The pipeline would move 830,000 barrels of crude oil per day to refineries through 1,200 miles of pipeline -- a small but controversial portion of the country's existing 2.6 million miles of oil and gas pipelines.

Proponents of the pipeline have noted the projected creation of 42,000 temporary construction jobs and the potential to produce oil in North America that could stay on the continent. How much of the oil would stay in the United States has been debated by Republicans and Democrats, but ultimately the decision is up to TransCanada, the owner of the pipeline.

Opponents of the TransCanada Keystone XL pipeline -- first proposed in September 2008 -- have argued that production of crude oil from oil sands is more harmful for the climate than traditional oil drilling, producing more greenhouse gases.

In Nebraska, where court cases and opposition have slowed down a U.S. State Department decision on whether to approve TransCanada's application, landowners have objected to the use of their land for the project and others have also expressed concern about the pipeline's proposed presence in the Ogallala Aquifer, which supplies drinking and irrigation water to 2 million people and farmers in the central United States. The aquifer is one of the world's largest.

In addition to being the subject of lawsuits in Nebraska, the pipeline has been studied by the U.S. State Department and had an environmental review since its proposal.

"It should have received all the scrutiny it did ... [but] not over six years," Hill said.

Welspun Tubular, a subsidiary of an India-based company located off Frazier Pike, contracted with TransCanada for $483 million to build 800 miles of the 1,200-mile pipeline. The Little Rock site devoted its operations to producing tens of thousands of pipes during 2010 and 2011, many of which are lined up, unused, on the perimeter of the 740-acre site.

Dave Delie, the Welspun subsidiary's president, said the company has been paid for most of the contract but that if the pipeline is approved, the company could finish out its work with TransCanada with 50 jobs lasting about a year dealing with inspecting the pipes as they're shipped off for construction.

"In addition," Delie said, "[approval] would free the land up for other projects."

Arkansas' other congressmen have spoken on radio and written in weekly newspaper columns promoting the construction of the Keystone XL pipeline.

U.S. Sen. John Boozman has spoken on the Senate floor in favor of the project, a spokesman from his office said, and U.S. Sen. Tom Cotton also has visited the Welspun site in Little Rock.

U.S. Rep. Steve Womack has spoken publicly about the project, including on the House floor and during a Weekly Republican Address that he gave July 3, his spokesman said. U.S. Rep. Bruce Westerman also has supported the project in interviews.

U.S. Rep. Rick Crawford visited Welspun in Little Rock about two years ago in support of the Keystone project. He's also spoken in favor of it on radio shows and in interviews, a spokesman said.

The pipeline work would come as manufacturing jobs in the United States and Arkansas are decreasing, as outsourcing manufacturing to other countries becomes more common, higher education enrollment and educational attainment increase, and improved technology and mechanization has decreased the need for as many people in certain manufacturing jobs across the globe.

Hill said he hoped Obama would realize the importance of manufacturing jobs associated with the pipeline.

Hill said he would hand-deliver a message from Welspun to the president urging his approval of the legislation passed last week, saying it could "help him understand our manufacturing economy."