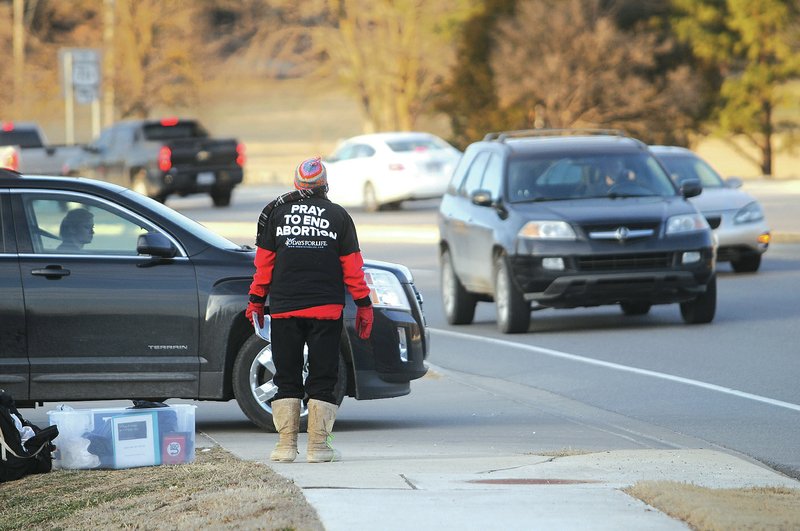 Patricia Mikkelson with 40 Days for Life, walks Thursday along the sidewalk on Arkansas 256 in Fayetteville just south of Joyce Avenue during a demonstration. Members of the group claim Highway Department officials have told them they aren’t allowed to carry signs on the sidewalks during their activities or they will be fined. For photo galleries, go to nwadg.com/photos.

FAYETTEVILLE -- Participants in an anti-abortion protest held in the same place, in the same manner and at the same times twice a year since 2011 were told Monday that they could no longer carry signs, organizers claim.

Participants in the 40 Days for Life prayer vigil have met twice a year in front of Planned Parenthood's Fayetteville Health Center at its various locations. Planned Parenthood, a nonprofit reproductive health care provider, moved to 3729 N. Crossover St. in Fayetteville in 2011, where a vigil began last week.

About noon Monday, an employee of the Arkansas Highway and Transportation Department, driving a state vehicle, told protesters that Crossover Street is a state highway -- Arkansas 265 -- and that signs are not allowed on state highways, local organizer Sheena Archambault said. The employee told the protesters that they were not allowed to plant their yard signs beside the sidewalk along the highway, she said. The protesters asked for confirmation, and the employee said she would be back.

On the advice of their attorneys, the protest organizers had participants stop posting signs after the first notification on Monday and have not resumed, Archambault said. After Wednesday's meeting, participants stopped carrying signs, although the vigil goes on, she said.

The vigil participants are wearing T-shirts with anti-abortion slogans, but these are not as effective as signs, she said.

The Highway Department has received a faxed letter of protest from a legal firm representing the group, a spokesman confirmed Thursday. The letter alleges that the state is violating the group's First Amendment rights to free speech.

The Highway Department is reviewing the complaint, but had no immediate response, department spokesman Danny Straessle said.

A spokesman for Planned Parenthood said the issue was between the state and the protesters, and that her group had no comment.

To her knowledge, there was no difference between this most recent protest and its predecessors other than the better-than-usual participation, Archambault said.

"Every year we ask the police if there's any new laws we need to follow," said Archambault. This year's winter vigil began Feb. 18 and was going better than usual, she said. The protesters were able to keep several people, working in shifts, in front of the center about 12 hours a day, she said.

The Thomas More Society, a nonprofit law firm based in Chicago, represents the national vigil. The firm faxed the letter to the state Highway Department late Wednesday.

"Until this week, the pro-lifers have not encountered any problems with law enforcement during the thousands of hours they have spent on the vigil," the law firm's letter said.

Arkansas Code 27-76-304 says in part: "The rights-of-way provided for all state highways shall be held inviolate for state highway purposes ... No physical or functional encroachments, installations, signs other than traffic signs or signals, posters, billboards, roadside stands, gasoline pumps, or other structures or uses shall be permitted within the right-of-way limits of state highways."

The letter says that, "We respectfully maintain that her directives -- attempting to prohibit First Amendment activity on public property, including sidewalks along a state highway -- were overly broad and, if enforced, they would be a clear violation of our client's First Amendment rights," the letter said.

The attorneys also argue that the laws apply only to advertising and to structures such as billboards.

"To apply this section of the code to a small group of individuals, displaying temporary, hand-held signs in furtherance of their First Amendment Rights to communicate their views on a matter of public importance is to stretch it past the breaking point," the letter said.