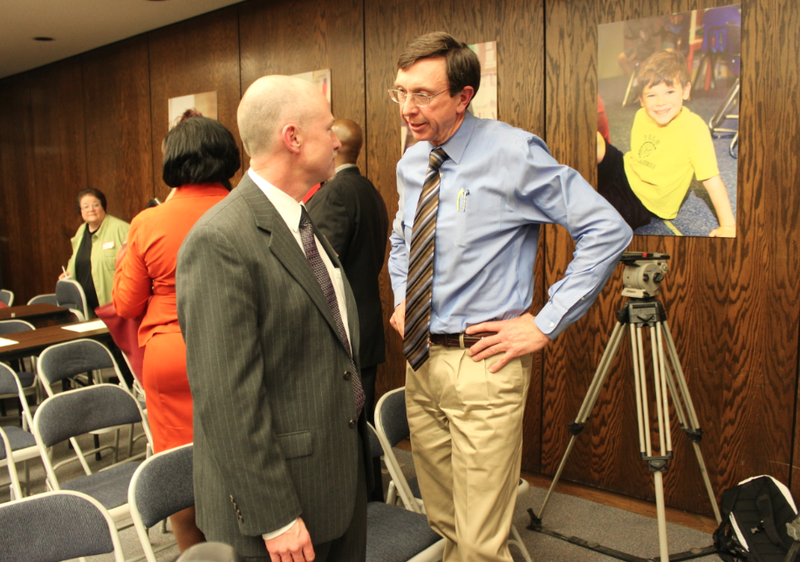 State Board of Education chair Sam Ledbetter, right, speaks to Little Rock School Board President Greg Adams shortly after the state board voted to take over the Little Rock district and dissolve the local school board. Ledbetter was the deciding vote. ( Gavin Lesnick)

The state Board of Education has voted to take over the Little Rock School District, removing the local School Board immediately but keeping Superintendent Dexter Suggs on an interim basis.

The 5-4 vote came at the conclusion of a special meeting held Wednesday to determine whether the state should intervene in the Little Rock district, which has six schools considered under academic distress: Baseline Elementary, Cloverdale Middle, Henderson Middle, Hall High, J.A. Fair High and McClellan High.

The takeover vote came after a compromise plan that called for a partnership stopping short of a takeover — but leaving open that possibility — failed on a 5-4 vote.

Board Chairman Sam Ledbetter proved the tie-breaking vote on both decisions. He said afterward he saw the compromise as an extension of previous unsuccessful efforts between the local school board and the state.

"At some point you just have to go in a new direction," he said.

Board member Vicki Saviers motioned for the takeover and voted for it along with Ledbetter, Kim Davis, Toyce Newton and Diane Zook. Before the vote on the compromise, Saviers told the members she believed in her "heart of hearts that this is going to be more of the same."

"Bottom line, it was the best thing for students," she said after the meeting of the takeover, adding she felt the compromise meant "change could not accelerate at the pace we need for it to."

Little Rock School Board President Greg Adams said after the vote he was disappointed his recommendation for the state to give the local board more time wasn't followed.

"My concern now and my hope is the kids of Little Rock will be served well and that the leadership that's going to be there will be able to find effective ways for the kids," he said. "Because that's the most important thing."

One part of the compromise motion was added to the takeover vote: the creation of a civic advisory committee composed of parents, students, and community and business leaders.

Board members earlier Wednesday heard from dozens of legislators, parents, students and other members of the public for and against state intervention.

Representatives from the Little Rock School District, too, addressed the board, contending that a state takeover isn't necessary because progress is being made and that the local School Board and Suggs deserve more time to address the issues.

Amanda Warren, a social studies teacher at Hall, was among those who spoke against the takeover. She blamed "politics" for the board's decision and vowed to stay involved to help the district regain local control.

"It won't just be a spark, it will be a bonfire," she said. "Because I'm not walking away. And I think a lot of the people ... who spoke today against state takeover - they'll bring their forces."

The six schools under academic distress earned that distinction because fewer than half their students scored proficient or better on state exams over three years.

The Arkansas Board of Education has rejected a compromise for the state to partner with the Little Rock School District to improve its academically struggling schools, a move that would short of a takeover but leaves open that possibility if progress isn't seen.

The 5-4 vote came at the conclusion of a special meeting held Wednesday to determine whether the state should intervene in the Little Rock district, which has six schools considered under academic distress: Baseline Elementary, Cloverdale Middle, Henderson Middle, Hall High, J.A. Fair High and McClellan High.

Board member Jay Barth, who recommended the compromise plan, said it would require the Little Rock district and the state board to develop a memorandum of understanding "centered on creating positive achievement."

That collaboration would have included two-year achievement goals for the distressed schools; ongoing oversight by the Department of Education School Improvement Office and consultation with its fiscal distress unit; the creation of an academic distress monitor to alert the state board and education commissioner to progress; and a civic advisory committee composed of parents, students, and community and business leaders.

If the partnership weren't successfully created before the board's March meeting, a state takeover would occur, Barth said, though it would require a formal motion then to do so.

The agreement also would have required quarterly progress reports, and a state takeover would be an option after each is submitted. Barth called that "the hammer of the state" over the Little Rock district.

Barth earlier in the meeting called his plan a "middle-path partnership" that could result in a takeover of the state's largest school district if it "over the months ahead does not continue to show ongoing development, especially when it comes to academic challenges in these schools and others that are deeply challenged."

The vote came at the end of a more than five-hour-long meeting, during which board members heard from dozens of legislators, parents, students and other members of the public for and against state intervention.

Representatives from the Little Rock School District, too, addressed the board, contending that a state takeover isn't necessary because progress is being made and that the local School Board and Superintendent Dexter Suggs deserve more time to address the issues.

The six schools under academic distress earned that distinction because fewer than half their students scored proficient or better on state exams over three years.

The state Board of Education is hearing from members of the public as it decides whether it should intervene in the Little Rock School District, which has six schools considered under academic distress.

After first hearing from officials from the state's largest school district and legislators, board members began taking comment from some 48 members of the public who asked to be heard as the state board considers action. The comment period was continuing just before noon.

State Rep. John Walker, D-Little Rock, and state Sen. Joyce Elliott, D-Little Rock, each asked the board not to take over the district. Elliott said attention should be directed instead at the six struggling schools.

"Everybody's got to be involved to solve this problem," he said. "That's what it takes to turn around the schools: the community. It takes the whole community, not just one part. Until we get involved, we're going to have the same problem."

Andres Moreno, a senior at Parkview High School in Little Rock, told the board he grew up in southwest Little Rock around gang violence in an environment where bomb threats and guns in school weren't uncommon.

He said those issues in the community surrounding the troubled schools must be addressed first.

"The test scores, the behavior — none of that will change" without addressing the community, he said. "It will remain the same."

Another Parkview senior, Josie Efird, defended the district, saying it "didn't fail" her and deserves more of an opportunity to fix the six schools.

"This school board isn't failing us," she said. "I want to thank them for that. And I hope they can finish the job they started."

Henri Smothers, a former president of the Little Rock PTA Council, said the school district should work with the state to implement reforms.

Marla Johnson, chief executive officer of Internet company Aristotle Inc., told the board she trusted it "to make a decision that takes all of these children into account and our entire community."

Johnson, who previously asked the board to make major changes and who started a Facebook group called "Collaborate to Educate: Big Change Now for Little Rock Schools," said she spoke to "advocate against inaction" and not to suggest a particular path for the board to follow.

The Little Rock School District has made its case for avoiding a full state takeover because six of its schools are considered under academic distress.

Chris Heller, an attorney for the district, told the State Board of Education at a special meeting Wednesday that it can address the problems by focusing on the schools in question rather than the district as a whole.

He noted the local school board has "made it clear it will do whatever it takes to fix the problems in the schools" and said the elected board is making progress.

"Democracy is working," he said. "Democracy is bringing positive change in the Little Rock School District. There's no need for a plutocracy yet."

Heller said the state board hasn't taken over other districts in the state where the rate of academically-distressed schools is greater than in Little Rock. And he noted that five of the six troubled schools are already "state-directed," meaning the state now has authority to take steps including replacing the entire staff or closing them.

"Why, when we look back, should all the blame be on the Little Rock School District for not fixing these schools faster," he asked.

Little Rock School Board President Greg Adams said the local board should be held accountable, but he said its current members and Superintendent Dexter Suggs haven't had enough time to work out the problems.

He likened the situation to the Arkansas Razorbacks football team, who didn't contemplate firing coach Bret Bielema in his first year even as he failed to win a conference game. Then progress was seen the next year, he added.

There has been progress in the district, Adams said, including the board unanimously passing last week a facilities plan.

"It's a lot better than zero conference wins," he said. "We have made a difference."

Adams asked the board to avoid a full takeover and instead "collaborate in a partnership that we've never seen before to make a difference in those schools."

"If we fail to continue that streak and we start protecting the status quo instead of kids, then come and take us over for the sake of the kids," he said. "But I don't think we're going to fail."

A special meeting of the state Board of Education to consider intervention in the Little Rock School District including a full state takeover is under way.

A crowd packed the board's meeting room and an overflow area set up in the lobby Wednesday as board members consider options to deal with six Little Rock schools considered under academic distress because fewer than half their students scored proficient or better on state exams over three years. They are Baseline Elementary, Cloverdale Middle, Henderson Middle, Hall High, J.A. Fair High and McClellan High.

The board set the special meeting earlier this month. Several prominent businessmen and a former Little Rock School Board member at that meeting asked the board to take over the district.

Others, including School Board President Greg Adams and state Rep. John Walker, D-Little Rock, have said the board should give the existing Little Rock School Board more time to address the academic problems at the schools.

Board member Vicki Saviers suggested the special meeting, saying then that she wanted board members to "be ready to make a decision and a bold decision" when they gathered for it.

Check back for updates throughout the day and see Thursday's Arkansas Democrat-Gazette for full coverage.

The state Board of Education voted Wednesday to take over the Little Rock School District. (By Gavin Lesnick)
[View Full-Size]

How do you think the Little Rock School District should be improved?