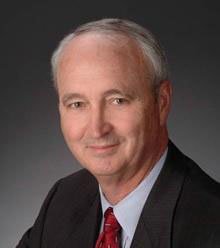 The state coffers ended the fiscal year with a $191.6 million surplus bolstered by some one-time cash influxes. 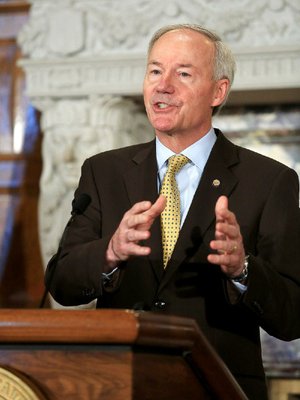 Photo by Rick McFarland
Gov. Asa Hutchinson is shown in this file photo. 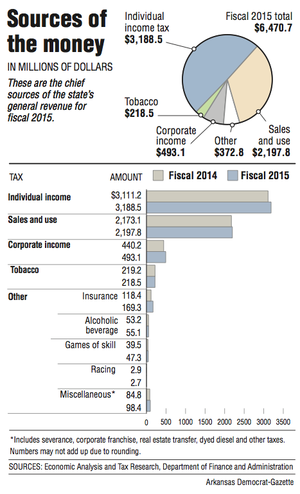 The end-of-year nest egg, more than double fiscal 2014's surplus of $78.7 million, came in part from a $14.4 million transfer from a settlement won by the Arkansas attorney general's office, as well as a $51 million transfer to general revenue from funds in the state Insurance Department.

The surplus -- combined with increases nearly across the board in different revenue streams including income to corporate taxes -- bodes well for the near future, according to state Department of Finance and Administration Director Larry Walther.

As to what will happen with the surplus, department officials said that all but about $38 million will be divvied up for previous general improvement commitments and other obligations.

On Thursday, Gov. Asa Hutchinson released a statement saying the figures showed that Arkansas is working in the right direction.

"I am pleased with these numbers, because they indicate a growing confidence in Arkansas's economy," Hutchinson stated. "Our conservative budgeting philosophy will not change as we continue to look for ways to grow our economy and meet the needs of our state."

In total, the state collected $6.47 billion in gross revenue, $72.3 million more than expected and a 3.7 percent increase from the $6.242 billion collected last year.

That marks the third-straight year that such revenue has set a record, starting with a $6.214 billion haul in fiscal 2013.

Tax refunds, bond obligations and other state financial commitments come off the top of gross revenue, leaving the remainder, or net revenue, for state agencies and services.

A settlement between Standard & Poor's Financial Services LLC and the state generated the extra, one-time $14.4 million.

Overall, Walther said, increases in revenue streams were robust, including a growth in income-tax revenue, the state's largest stream of money.

Two years ago, the state implemented a $50 million tax cut for individual taxpayers, and again this year, lawmakers approved another tax cut, this time $100 million over the next two years aimed at the middle class, or those making $21,000 to $75,000 a year.

"We're in a pretty good position to deal with those sorts of changes in our revenue streams," Walther said. "We want to be conservative in our forecast so that we're available to finance state government and also be able to address ongoing issues."

That's $15 million below the Department of Finance and Administration forecast.

Sales tax revenue was ahead of forecasts most of the year. But an Arkansas Supreme Court ruling in early June forced the state to pay more than $24 million to fracking companies that had improperly been charged taxes on "proppants"-- granular substances, such as sand, that are injected into wells to keep fractures open so oil or gas can be removed.

But on Thursday, Walther said that amount was $28.7 million.

Otherwise, sales tax revenue is climbing and that "bodes well for the economy in Arkansas," Walther said. "I don't know what happens next month ... but if you look at what's going on, it tells me things are doing well in Arkansas."

The most recent figures from the U.S. Bureau of Labor Statistics show that the state's unemployment rate in May was at 5.7 percent, up from 5.6 percent in April.