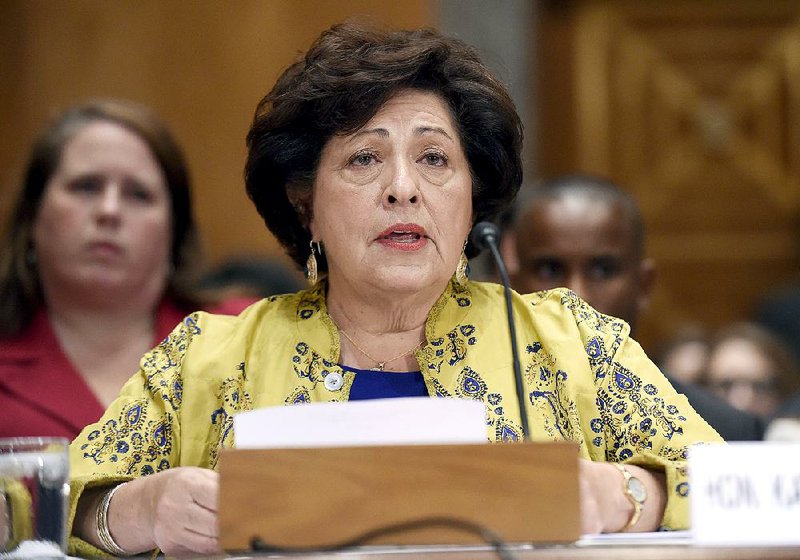 WASHINGTON -- The head of the government's personnel office abruptly stepped down Friday, bowing to mounting pressure to resign after the unprecedented breach of private information her agency was entrusted to protect.

Katherine Archuleta, the former national political director for President Barack Obama's 2012 re-election campaign, had served as director of the federal Office of Personnel Management since November 2013.

She came under fire after revelations this year that hackers -- widely believed to be working for China's government -- had infiltrated her agency's databases as well as background-check records for millions of people who applied for U.S. security clearances.

On Thursday, Archuleta rebuffed demands that she resign, declaring she was "committed to the work that I am doing." But calls for her resignation from lawmakers -- including members of Obama's party -- mushroomed.

On Friday morning, she went to the White House to personally submit her resignation to Obama.

"Today I informed the OPM workforce that I am stepping down as the leader of this remarkable agency and the remarkable people who work for it," Archuleta said in a statement. "I conveyed to the President that I believe it is best for me to step aside and allow new leadership to step in, enabling the agency to move beyond the current challenges and allowing the employees at OPM to continue their important work."

The president named Beth Cobert, the deputy director for management at the Office of Management and Budget, to step in as acting director of the agency.

"It's quite clear that new leadership, with a set of skills and experiences that are unique to the urgent challenges that OPM faces, are badly needed," said White House spokesman Josh Earnest.

Archuleta resigned one day after the administration disclosed that the number of people affected by the federal data breach was far greater than previously known.

In addition to 4.2 million people whose records were stolen in an initial hack first revealed earlier this year, more than 21.5 million had their Social Security numbers and other sensitive information stolen in a second hack, believed to be the biggest in U.S. history.

Archuleta offered her resignation "of her own volition" and wasn't forced out, Earnest said.

At the same time, he conceded that Americans affected by the breach are still "due additional information" from the agency about what happened and how to protect themselves.

Some lawmakers said her resignation was too little, too late. Sen. Ben Sasse of Nebraska responded to the news with a two-word statement: "Not enough."

"It's a Band-Aid, but it's not going to stop the bleeding," said Rep. Jason Chaffetz of Utah, chairman of the House Oversight and Government Reform Committee.

He said the Office of Personnel Management still lacks a functional system to protect private data held by what is effectively the largest human resources department in the world.

"It's time to bring in the nerds," he added.

Rep. Adam Schiff of California, the top Democrat on the House intelligence committee, said the leadership change shows that it isn't enough to blame hackers and that officials must be held responsible for breaches.

"It will also take years before the full security repercussions may be known, and the intelligence community is already taking steps to address any new vulnerabilities posed by the compromise of this data," Schiff said.

"Every other agency should have its head examined if it's not taking steps to protect its data," he said. "Because if there's a problem at one agency, there's likely a problem at other agencies."

In the Senate, Democrat Mark Warner of Virginia and Republican John McCain of Arizona said she should be replaced.

House Republican leaders said in a statement that her departure "does not in any way absolve the president of the responsibility to repair this damage to our national security."

But J. David Cox Sr., president of the American Federation of Government Employees, put part of the blame on Congress for failing to adequately fund the personnel office.

"Firing one individual solves nothing," he said.

Archuleta joins a small but notable group of top Obama administration officials who have resigned under pressure from Congress and the public.

Veterans Affairs Secretary Eric Shinseki stepped down last year during a scandal over problems with VA health care services, and Secret Service Director Julia Pierson was pushed aside in 2014 after breaches to Obama's security.

In the personnel office case, the data stolen by hackers included criminal, financial, health, employment and residency histories, as well as information about families and acquaintances. The larger attack affected not only applicants for security clearances but also nearly 2 million of their spouses, housemates and others.

Numerous U.S. lawmakers who have been briefed by federal investigators have said China was responsible, and even National Intelligence Director James Clapper has said publicly that China is the "leading suspect."

Yet even as Archuleta stepped down, the White House declined to point the finger at Beijing, reflecting the diplomatic sensitivities involved in such an accusation against a global economic superpower.

Obama's cybersecurity coordinator, Michael Daniel, said, "Just because we're not doing public attribution does not mean that we're not taking steps to deal with the matter."

A governmentwide 30-day review of cybersecurity efforts will wrap up later this month, officials have said.

Meanwhile, officials have said the hackers do not appear to have used the data since the theft.

The White House said it has stepped up cybersecurity efforts, and in early June government employees received notice that the personnel office would offer credit-monitoring services and identity-theft insurance to those affected.

Cobert, the budget office's chief performance officer, has been confirmed by the Senate once before.

Before joining the budget office, Cobert worked for nearly three decades as a consultant for McKinsey & Co., a multinational management consulting firm.

Information for this article was contributed by Josh Lederman, Jack Gillum, Alicia A. Caldwell, Jim Kuhnhenn and Julie Pace of The Associated Press; by Toluse Olorunnipa and Chris Strohm of Bloomberg News; and by Julie Hirschfeld Davis of The New York Times.