Old Crow's on the road ... between Dylan's calls 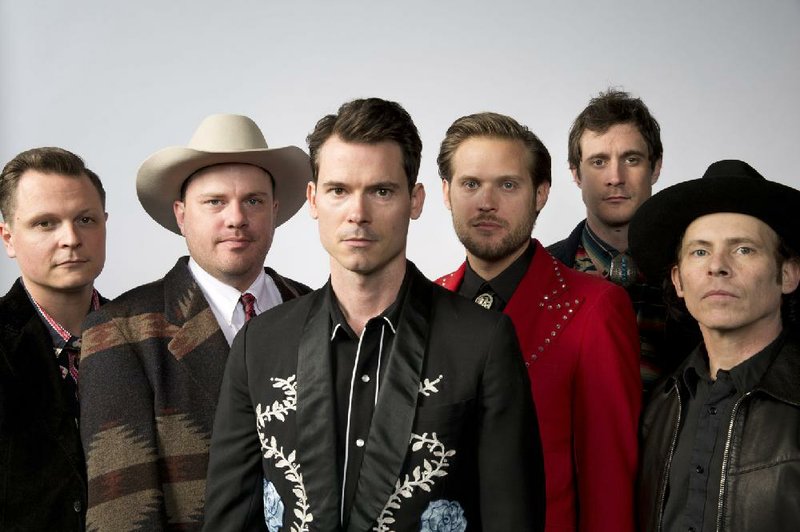 The chance to work with Bob Dylan once, let alone twice, would be something a musician might choose to, well, crow about.

But Ketch Secor (center of photo) is about as calm about it as he is hopped up when on stage with his band, Old Crow Medicine Show, which has managed to combine an old-time string band lineup with the energy and fast-paced approach of punk rockers.

"We hope to catch lightning in a bottle again," Secor says with a laugh, referring to the band's latest collaboration with the legendary singer-songwriter.

"After 'Wagon Wheel,' we were certainly surprised to hear from Bob's manager that he had another song, 'Sweet Amarillo,' he wanted us to finish.

"It was slightly different circumstances. With 'Wagon Wheel,' we just sent him what I had done years earlier, when I was a teenager, and it was approved as a co-write, but with 'Sweet Amarillo,' he actually came back with some suggestions on changes he thought would work better. So that's how that song came to be recorded."

(A recent version of "Wagon Wheel" by Darius Rucker, first known as the lead singer of Hootie & the Blowfish, became a massive hit and won Rucker a 2014 Grammy Award for Best Country Solo Performance.)

The new Dylan co-write is on the latest Old Crow Medicine Show CD, Remedy, released in July 2014 (and winner in February of the Best Folk Album Grammy). The band has released eight albums, beginning with a 1998 cassette-only compilation, Trans:mission.

In 2012, the band signed with ATO Records (founded by musician Dave Matthews), which released Carry Me Back and Remedy. In June, the band released an EP, Brushy Mountain Conjugal Trailer, named for a song that also opens Remedy, the story of a prison break, a timely topic given the recent New York state escape of two convicted murderers.

"Country music has long championed the cause of the incarcerated," Secor notes, mentioning songs by Vernon Dalhart and Arkansas' Johnny Cash and Dylan's song about Reuben "Hurricane" Carter. Given that his band has notched several shows in Cash's home state, Secor mentions special memories of Arkansans Jimmy Driftwood and Levon Helm.

"Jimmy Driftwood was a great inspiration to me," he says. "He was a schoolteacher to begin with, who sought to teach with his pen and a guitar. We made our first record in Nashville's RCA B studio, where Jimmy had famously played his mouth-bow.

"We once opened a show for Levon Helm in Maryland, and I started to play [Driftwood's] 'Battle of New Orleans' and Levon's eyes just lit up! He was holding his young grandson at the time and it was such a sweet moment. He was a guy who just radiated kindness."

And Old Crow multi-instrumentalist Cory Younts' parents are from Little Rock. "Cory is a great 'buck dancer' on stage and his great-grandfather was a Civil War-era fiddler," Secor adds.

The band's lineup consists of Secor on fiddle, harmonica, banjo, mandolin, guitar and bajo sexto; Critter Fuqua on banjo, guitar, accordion and resonator guitar; Morgan Jahnig on stand-up bass; Chance McCoy on fiddle, guitar, banjo and mandolin; and Younts on mandolin, drums, percussion, keyboards, harmonica and Jew's harp. (Gill Landry, who plays banjo, resonator guitar and guitar, is currently out on his own tour, promoting a solo album). All the members contribute vocals.

When it comes to subsequent collaborations with Dylan, Secor admits there is that one elusive goal he harbors: "It would be the dream of a lifetime if we could open a show for Bob," he says. "That would be quite a rush if we were to pull our bus in beside his."

Print Headline: Old Crow's on the road ... between Dylan's calls