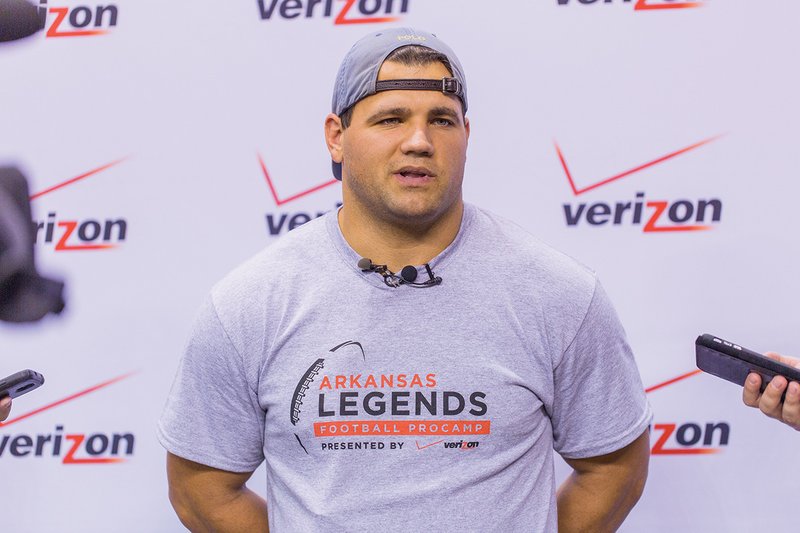 Peyton Hillis is one of those guys who would play football without pads. For free. Well, maybe not free, but he would do just about anything to play football. It’s what he loves, what he has dreamed of since he was a little boy growing up in Conway and why he pulled a pickup up and down the street in high school.

He’s a rugged country boy that can take licks as good as he can dish them out, and that has served him well as he moved from Conway High School to the University of Arkansas and most recently with a seven-year career in the NFL. Two years ago, it looked like the running back’s career was over when he was cut by Tampa Bay before the season. But he left a volunteer high school coaching job in Tennessee to start in the middle of the season in the backfield for the New York Giants when injury problems arose.

Hillis began last season on the Giants roster, and when playing time became hard to come by in the backfield, Hillis filled in on special teams making some highlight tackles. That might have been humbling for some who showed superstar ability like Hillis did when he ran for 1,177 yards for Cleveland in 2010. Not Hillis, he was glad to have a chance to knock heads for a living on Sundays.

He would gladly fill that role for another NFL team this year — if he was able. However, Hillis, who has sat out parts of every NFL season he has played in due to injury, most likely won’t be cleared to play after enduring a concussion last season.

“I had a really bad concussion last year, and it isn’t looking too good for me this year,” Hillis said at the Arkansas Legends ProCamp on July 10 at Verizon Arena. “I still had a couple of years left on my contract, and it is one of those things where it hurt a little bit to hear that news. You just have to keep going with it. I had a pretty significant injury last year. I have had quite a few throughout my career, so I thought it was time to hang it up.”

The former Hog has relocated to Northwest Arkansas and is “looking at planting down roots.”

“I don’t know [what I am going to do] yet. I really enjoy being around kids,” Hillis says. “I think I may coach. That is my passion.”

That passion was evident at the camp. Near the end, some campers were called to the front of the group to do the “Whip.” One young blond-headed boy was especially enthusiastic and was break-dancing on the turf. Hillis’ former Hog teammate Darren McFadden taped the boy with his phone and told Hillis, “Look at him.” Hillis immediately ran over and started gyrating his body and shaking around, much to the delight of the boy, who danced even harder.

So coaching football may soften the blow of an NFL career that didn’t end on his terms.

“As soon as I get settled, I will go around to some local schools and see what I can do,” Hillis says. “I have always loved kids, and I thought I could help out, especially around football. It is something I am looking forward to.”

Hillis will coach football, hunt and fish, and enjoy his family without jeopardizing his health more with no regrets.

“When you get up in there in age as a running back, you just try to hang on. I really enjoyed my ride, and I am very blessed,” he says. “I have been in the league a lot longer than most people dream of. I have to give thanks to God for that. I just look back and think nothing but good things.”