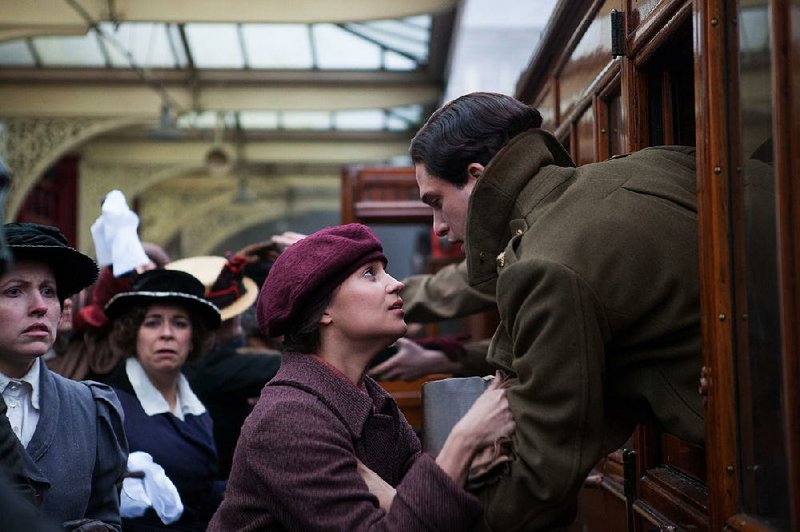 Testament of Youth is an exquisitely composed portrayal of the despair and futility of World War I as seen from the rarely revealed viewpoint of an idealistic young woman.

Based on the memoir by British pacifist Vera Brittain, this decidedly unhurried period drama begins in Great Britain when the war ends on Armistice Day in 1918. Vera (Alicia Vikander, Ex Machina), first seen wandering glumly through a celebratory city crowd, flashes back to remembering the carefree days of 1914, when time was spent attending formal teas, wearing lacy dresses and girlish hats, and romping chastely with her brother Edward (Taron Egerton, Kingsman: The Secret Service) and his pals Victor Richardson (Colin Morgan) and Roland Leighton (Kit Harington, Game of Thrones) on the flower-strewn pastoral family estate.

In between all this mild-mannered fun, Vera has a mission: With Edward's help and a good deal of frowning and stomping about, she's intent on overcoming the objections of her doting father (Dominic West, McNulty on The Wire) and ineffectual mother (Emily Watson) in gaining permission to take the entrance exam to prestigious Oxford, where females seldom tread. An ominous threat of war looms, according to the headlines, but hey, the future looks so bright! Naturally, our quietly determined heroine gets her way.

Her clever approach to the stiffly formal exam gains her admission, but almost as soon as she settles into academic life, Vera learns that her brother and Roland plan to leave to defend their country. "Let him be a man," she admonishes her father when Dad is reluctant to let 18-year-old Edward don a uniform. So, after assurances that they look spruce in their soldier gear, Edward and Roland (with whom Vera has entered a clumsy starter romance, complete with exchanges of hand-penned poetry) board a train en route to the front lines.

Although she's reluctant to leave her hard-won place at Oxford, guilt-tripped Vera decides to do her part by becoming a volunteer nurse. After no-nonsense training by Irish nuns, she's off to the battlefields of France. That's where, in short order, her youthful exuberance, self-absorption and dreams of a scholarly life get shot down.

The film is all about textures and light, lovely images and precise, artistic composition of one scene after another. Performances are consistently understated; there's no shouting, no uproar and surprisingly little passion. To say the pace is stately is to exaggerate. Testament languidly flows along and refuses to be rushed, which can be unsettling to audiences in search of some action. Those who expect a series of battlefield experiences should look elsewhere, as Testament of Youth is not about war, but about its effects on those caught up in its deadly attractions.