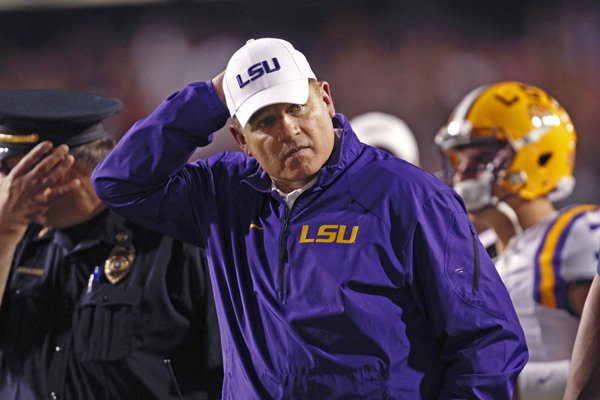 HOOVER, Ala. — LSU football appears perched at a crossroads as head Coach Les Miles heads into his 11th season in Baton Rouge.

The Tigers, four years removed from an unbeaten regular season, an SEC championship and a loss in the BCS title game, are coming off a so-so season that ended with a loss to Notre Dame in the Music City Bowl and the departure of respected defensive coordinator John Chavis.

SEC TITLE SCENARIO The first thing that must fall into place is for the team to buy into the winner of the quarterback race between Anthony Jennings and Brandon Harris. A quality offensive line and a strong backfield, led by sophomore Leonard Fournette, should do their part. The defense will be under the microscope under new coordinator Kevin Steele, as it restructures from three more early departing juniors

“At LSU, 8-5 is not a good enough season,” Tigers offensive tackle Vadal Alexander said at SEC media days. “We feel we’re a lot better than an 8-5 team. We feel we have to do a lot of things to improve.”

The Tigers didn’t get consistent play at quarterback and ended up 4-4 in the SEC, including 2-4 against West opponents.

Two road losses were particularly disappointing — 41-7 at Auburn and 17-0 at Arkansas. The loss to Arkansas was a result that ended the Razorbacks’ 17-game losing streak in SEC games.

LSU bounced back from the Arkansas loss to win 23-17 at Texas A&M on Thanksgiving night, but the program has suffered some blows since then.

There was the 31-28 loss to Notre Dame in Nashville, Chavis leaving, and five arrests, a spate that included quarterback Anthony Jennings, who started 12 of the Tigers’ 13 games. Miles dismissed two young defensive linemen from the team after legal run-ins. Jennings is still serving a suspension, but Miles hinted at SEC media days that Jennings is on track for reinstatement after all the details of the arrest became known.

The Tigers are still picked to finish third in the West, behind Alabama and Auburn, mainly on the strength of a defense that ranked No. 9 in the nation in yards allowed last season.

But analysts wonder if the continuous stream of departing juniors — three more left for the NFL Draft after last season — might finally impact the Tigers’ depth as they transition to new coordinator Kevin Steele.

Miles read off the statistics — 24 defensive players drafted since 2010, eight defensive players taken in the first five rounds of the 2013 draft — to back up his contention that the talent level on defense will be intact despite the losses.

Miles chalked up last season’s 8-5 record to a variety of things.

“We were in a spot there, where maybe the youth at quarterback and some of the juniors that we lost may well have given us a little bit of, gave us a difficult season,” Miles said.

He deflected a question about whether the LSU defense would be better with Steele and first-year defensive line coach Ed Orgeron than it was under Chavis last year.

“I think ‘better’ is speculative,” he said. “I really don’t know. I can tell you that we’ve had some really talented teams in the last seven years or so with guys that have gone on to the NFL and played great.

“So our talent pool has been pretty special. … We would expect that talent would continue and that we would have a great defense, period.”

“It was strange,” Beckwith said. “Coach Chavis was like a father figure for me. It was strange not having him there, but then with him and coach Steele being so close, they’re just like brothers. He came in and filled that role well.”

Leonard Fournette’s return as a sophomore after rushing for 1,034 yards and 10 touchdowns is a nice starting point for the offense, which also brings back Alexander, Jerald Hawkins and Ethan Pocic as starters on the offensive line.

The big question for offensive coordinator Cam Cameron is who will settle in as the top quarterback.

“Experience isn’t something that you can just will on a guy,” Miles said. “The good news is we have a guy who’s started games and we have a guy that’s been around it now and played through two springs and been through a fall.

“So our quarterback play will be better, legitimately better. There’s been some things that we’ve done to kind of script and hone to make their skills and abilities more evident, so I think we’ll get really improved quarterback play.”

Lineman Alexander said he expected better production from both quarterbacks.

“Even before Anthony had stuff happen he was doing great,” Alexander said. “They’re showing a new-found growth and maturity I haven’t seen since they got here. They’ll learn from their mistakes and get better.”