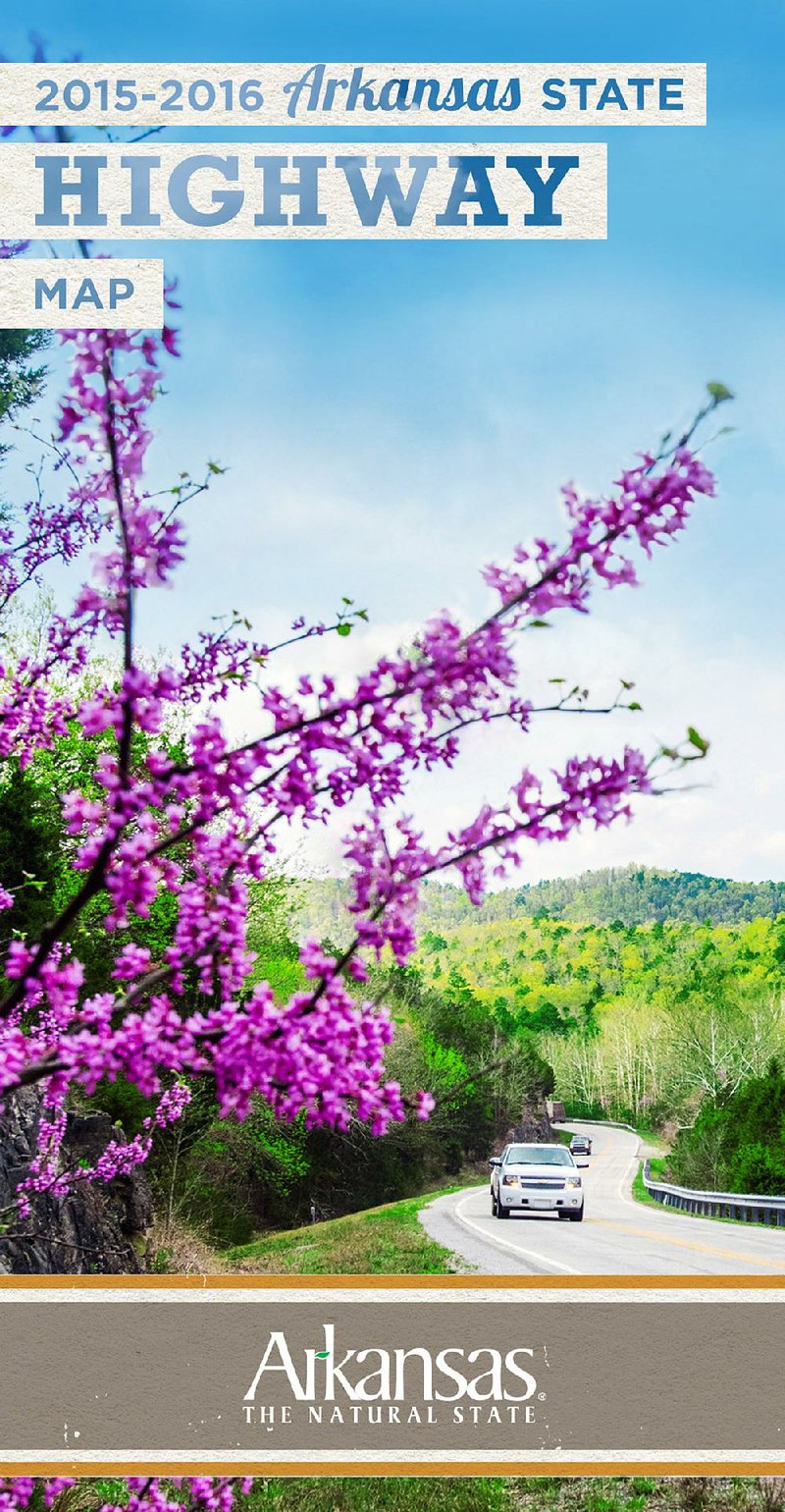 The 2015-16 edition of the Arkansas State Highway map features a stretch of Arkansas 5 in Stone County.

In the digital age, when routes routinely can be plotted with a smartphone, the cartographer who oversees the production of the paper version of the Arkansas State Highway Map isn't quite ready to call it an anachronism.

Now in its 86th year, the venerable map has a new look, one that Sharon Hawkins said she hopes will help revive interest in the traditional format for figuring out where a place is and how to get to there.

"We think it is easier on the viewing eye," said Hawkins, who leads the Arkansas Highway and Transportation Department's geographic information systems and mapping section. Her 11-person office produces detailed city and county maps to help road planning, in addition to the state map, first produced for the public in 1929 and in color since 1946.

The new map uses a softer color scheme -- gone is the overabundance of yellow -- to help roads and other features better stand out, she said. The surrounding states each have different colors. In past maps, all of them were green. The national and state forests now are filled in with a uniform pattern to make them more visible.

"The department strived to produce a map that would be informative and easy to read for Arkansas' travelers," Hawkins said.

Scott Bennett, the department director, distributed early copies of the map to the five members of the Arkansas Highway Commission at its meeting last week.

"I know people love their GPS, but they still love their maps, too," he said.

They soon will be able to judge for themselves how the new maps look. This week, the department is expecting a shipment of 1 million copies of the 2015-16 edition of the map.

The total cost for printing it is $110,000, or 11 cents per copy, but once they are unpacked and distributed, they will be available for free through the state's 13 Arkansas Welcome Centers and the Arkansas Parks and Tourism Department as well as the Highway Department.

The new map features on its cover a photograph of Arkansas 5 in Stone County, with part of a redbud tree in the foreground. It was shot by the department's photographer, Rusty Hubbard, and was one of seven photographs considered for the cover, according to Hawkins.

No cities, towns or communities were added or removed from the latest edition of the map, which lists 1,364 cities, towns and communities. Of those, 501 are incorporated and have their U.S. census population listed.

Hawkins said the Independence County town of Southside was incorporated since the last map was produced. But its population is listed as to be determined because it lacked an official census count, she said.

Another community, Rose Creek in Perry and Conway counties, was approved as an official unincorporated place by the U.S. Board of Geographic Names last month, but notification came too late to be included on the map. Work on the map concluded about three weeks ago.

"It will be the first change in next year's map," Hawkins said.

Patricia Watts, whose mailing address is in the incorporated community of Casa, said she and others in her community wanted an official name so the community could be eligible to put up a sign disclosing it is a crime watch area after the community suffered three break-ins last year.

"It's not that we wanted to be placed on the map, per se," said Watts, whose family goes back four generations in the community, which she figures has a population of about 75.

This map also is the first to feature Gov. Asa Hutchinson. He took office in January.

Producing the state map is a small part of what the Highway Department's geographic information systems and mapping office does, but it is its most high-profile product. About 30 percent of the staff devotes a total of two months to work on the state map each year, according to Hawkins.

All the work for the paper map is done online, which has been the case since 2002, Hawkins said. On a computer, the file for the map takes up about 32 megabytes. And it already is available online at the department's website, as all of the agency's other maps are.

Last year, maps were included in the 112,014 vacation travel kits requested from the Arkansas Department of Parks and Tourism, according to Miranda White, the agency's tourism manager. The number is down slightly from the 119,138 requested in 2013 but is markedly higher than the 80,800 requested in 2012.

Though it can seem little more than a handy relic that people can keep in their cars or truck glove compartments or on their office desks, it is more than that: It is the most accurate snapshot of the Arkansas highway system, put together by the people who know the system best.

"It is the map of record for the state highway system when it is published," said Danny Straessle, the department spokesman. "We find online mapping services are not always accurate."

The state map hasn't quite gone the way of the dodo bird in other states, either.

A survey conducted by the Minnesota Department of Transportation found that at least 47 states, as of 2012, still produced their own maps. Less than half produced them annually like Arkansas does. (Arkansas has done so every year except 1978, when the 1977 version was reprinted. Hawkins said she didn't know why.) Thirty-six produce the maps in-house, also like Arkansas.

The Arkansas map's cost to print was less than the average cost of the maps in the survey, which was 14 cents. Maryland had the lowest cost per map, 8 cents, while Pennsylvania had the highest, 21 cents, according to the survey.

Even the state's old maps come in handy. Historians have used them to understand the development of an area they are studying, according to Hawkins. Others have used the maps while in search of old cemeteries that may have been marked on old city and county maps but aren't noted today, she said.

And one map is on its way to the big screen.

The department received a request from a clearance company, which secures the rights to use items in movies, to use a 1983 map as a "prop or set dressing" in a movie under development called Mena, with actor Tom Cruise in the lead role, Straessle said.

Straessle said the department granted the company permission to use the map, which is copyrighted, in the film or its promotional materials, such as trailers.

"We did ask for a contributing credit," he said. "They said they would do their best to accommodate us."