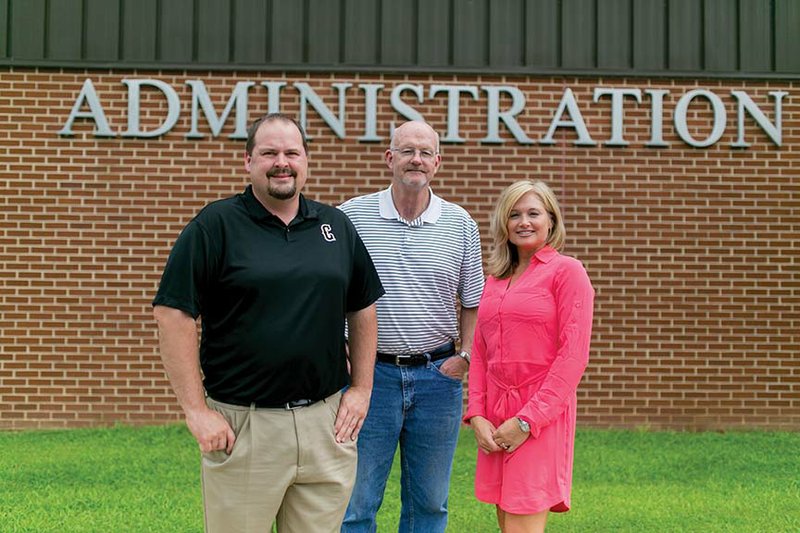 The beginning of a new school year always seems to bring changes for students, faculty and staff alike.

Such will be the case Aug. 17 as the Clinton School District begins a new year. Among the most notable changes will be a new superintendent, a new junior high school principal and a new elementary school principal.

Andrew Vining is the new superintendent. He’s not “brand new,” however, as the 59-year-old Vining has been the interim superintendent for the district since April 17. The school board officially hired him as the superintendent on July 21 and gave him a two-year contract.

Michael Wells, 41, is the new junior high school principal and will oversee students in grades seven through nine. He is not “brand new” either, as he has been employed by the Clinton School District for eight years.

Caroline Nail is the new principal at Cowsert Elementary School, and she is “brand new.” Nail, 40, comes to the Clinton School District from the Magnet Cove School District in Hot Spring County, where she was the elementary-building principal last year. She will oversee kindergarten through third-grade students.

Along with these three administrators will come approximately 20 other new people — teachers, support staff and district personnel.

“We had a high number of retirements and resignations at the end of the last school year. The superintendent left. Two principals left,” said Vining, whose 35-year career in education includes several years as the basketball coach at Clinton High School.

“Change is scary for us all. We want to make sure everyone knows we are going to do what’s best for the kids. We believe this year will be a fresh start for everyone,” he said.

“Being a superintendent is a lot like being a coach. You have a team you need to get going in the same direction to achieve a goal,” Vining said.

“We have a team, and we’ve got everybody going in the same direction. We are going to be successful. We’re looking for a good year,” Vining said. “Clinton is a good school. There is a lot of opportunity here … unlimited potential.

“My role is to provide stability and to guide the ship. While we do have two new principals, we also have two veteran principals — Elaine Treadaway at the intermediate school (grades four through six) and Frank McMurry at the high school (grades 10 through 12). We also have many veteran teachers.”

Vining retired as the superintendent of the Searcy County School District in Marshall in July 2014 after 15 years there.

“I came out of retirement in April when members of the school board called me and asked me to serve as interim superintendent here in Clinton,” Vining said.

“I was happily retired from education,” he said, laughing. “I had gone to work scouting girls basketball players for a company in Texas and had done some business development for another company.

“On April 17, I got a call from [the Clinton School Board] about a ‘sudden development,’ and they asked me to come and talk to them. I came and visited, and here I am.”

Vining grew up in Arkadelphia and received a bachelor’s degree in economics and a Master of Science in Education degree from Ouachita Baptist University in Arkadelphia. He received his certification in education administration from the University of Central Arkansas in Conway.

Vining served as principal at several schools before becoming superintendent at Marshall.

“My wife, Gina, and I always thought we’d come back to Clinton,” he said. “Three of our kids were born while we were here. We called it home. So when they called me, they knew I’d return. I’m looking forward to this new opportunity.”

Gina Vining is a registered nurse and works in the Searcy County Health Unit as a maternal health specialist; she has been there for 25 years.

The Vinings have four children: Their son Drew, a civil engineer with the Arkansas State Highway and Transportation Department, and his wife, Jessica, have one son, Jackson, 1, and live north of Marshall; son Justin and his wife, Laken, live in Clinton, where he is employed with Community Service Inc.; daughter Jenny Posey, a preschool teacher, and her husband, T.J., live in Russellville and are expecting their first child on Aug. 14; and daughter Caroline Vining is moving to Russellville, where she will be the annual giving coordinator at Arkansas Tech University.

“Clinton is where I have always wanted to be,” said Wells, who grew up in Sherwood.

He was the band director at Clinton for several years before accepting the position of alternative education director in 2012.

“I’ve been trying to get into administration for several years,” Wells said when asked how he felt about being the new principal at the junior high school. “I volunteered a lot. … I had to learn the ropes, but I got through it.

“I am just where I want to be. I knew from the first time I came here and saw how the students treated each other — with compassion — that’s where I wanted to be.”

Wells graduated from UCA in 1997 with a Bachelor of Music Education degree and from Arkansas State University in Jonesboro in 2007 with a master’s degree in education, educational leadership and administration.

Wells lives in Greenbrier with his wife, Marcy, and their children, Taryn, 10, and Tyson, 5. Marcy is a band director with the Greenbrier School District, where the couple’s children attend.

Nail, the new principal at Cowsert Elementary, is a 1997 graduate of Hendrix College in Conway, where she received a Bachelor of Arts degree in education. She received a Master of Science in Education degree and her educational leadership certification from UCA in 2009.

“I’m absolutely thrilled to be in the Clinton school community,” Nail said. “My husband, Chris, is the new principal at Mount Vernon-Enola High School, so our family will be relocating to the area. My new job is a perfect fit for me.

“I’ve been in education for 18 years; 13 of those years were in the classroom and the rest in administration.”

Born in Hot Springs, Nail was assistant principal at Angie Grant Elementary School in Benton before she took the position at Magnet Cove.

Her husband, Chris Nail, was a basketball coach for 15 years before he moved into administration in the Benton School District.