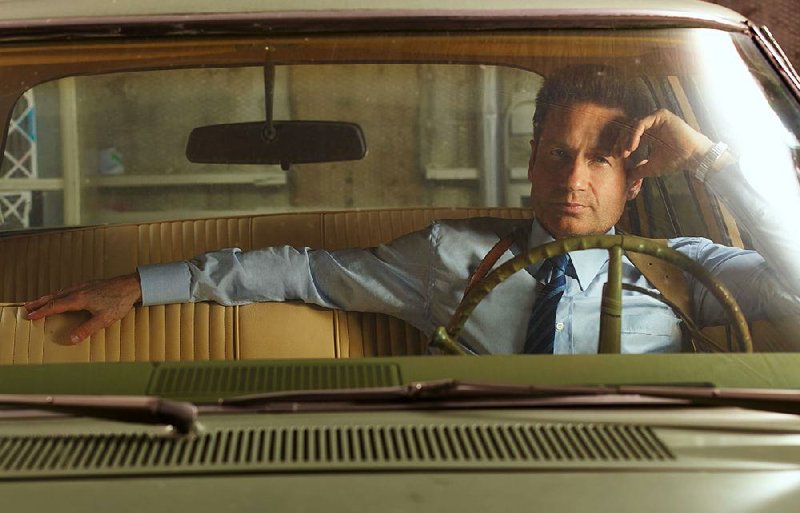 Because recent TV Columns have been busy rounding up the networks' big fall announcements, a few summer shows have flown in under the radar.

What looks interesting? Here's a heads-up about Aquarius, a new David Duchovny crime drama on NBC that had a two-hour premiere last week. The next episode arrives at 8 p.m. Thursday.

I don't feel too bad about missing the debut because, in a Netflix-style episode dump, all 13 episodes are already available online at NBC.com and other video-on-demand outlets. They'll be posted until June 25 if you want to catch up. Dumping all the episodes at once is NBC's nod to the growing number of binge viewers.

First of all, yes, Aquarius is another one of those ballyhooed "event" series. In a less fragmented era, they used to be called miniseries, but labeling them "events" are the networks' attempts to keep us interested during the summer with year-long new programming.

I'm just not certain that Aquarius reaches the appropriate level of ballyhooness for which NBC was reaching. If not must-see appointment television, it is, nonetheless, quite passable summer fare that will give you your Duchovny fix until he and Gillian Anderson return Jan. 24 as Mulder and Scully. That's when Fox revives The X-Files for six "event" episodes.

If you are an Anderson fan, you can watch her as psychotherapist Bedelia Du Maurier in NBC's Hannibal. Anderson becomes a series regular when Hannibal returns at 9 p.m. Thursday.

Meanwhile, back to Aquarius.

All of that is radically remaking his world and he's clueless.

So when Emma Karn (Emma Dumont, Bunheads), the 16-year-old daughter of an old girlfriend, disappears in a "sea of hippies," Hodiak agrees to go off the books to find her.

With his crew cut, white shirt and narrow black tie, Hodiak looks so much like a cop he gets nowhere with the free-love flower children. So, he enlists the aid of bearded, idealistic young undercover officer Brian Shafe (Grey Damon, Friday Night Lights), who is able to infiltrate the counterculture.

Things get urgent when they discover that Emma has joined the "family" of a career criminal and wannabe rock star named ... wait for it ... Charles Manson.

Manson is played by Gethin Anthony, best know as Renly Baratheon on Game of Thrones. (Renly was the one assassinated by a shadow creature conjured by the evil Melisandre.)

The events in Aquarius are still two years before Manson's 1969 Tate-LaBianca murders, but the historical fiction rings true. The Summer of Love music helps.

Whether Aquarius is an "event" or not, it'll still do just fine to pass away a few weeks in the summer.

• Series returns. Halt and Catch Fire Season 2 kicked off at 9 p.m. Sunday on AMC. This is a swell series for those fascinated by the early days of personal computers.

Season 2 picks up in early 1985 and centers on the rise of Mutiny, Cameron (Davis) and Donna's (Bishe) start-up gaming company that is built upon the most disruptive idea of the modern era -- the Internet.

• New host. In case you missed the memo, actor (Silver Spoons, The Fresh Prince of Bel-Air) and Dancing With the Stars Season 19 champ Alfonso Ribeiro has been named the new host of ABC's America's Funniest Home Videos.

He replaces Tom Bergeron, who held the job for 15 seasons.

In a funny bit at the recent end of Season 25, Bergeron was driven off the lot in a golf cart by Bob Saget, AFV's original host (1989-1997). For the record, John Fugelsang and Daisy Fuentes shared the duties for two seasons (1998-99), and Bergeron took over when it became a weekly series again in 2001.