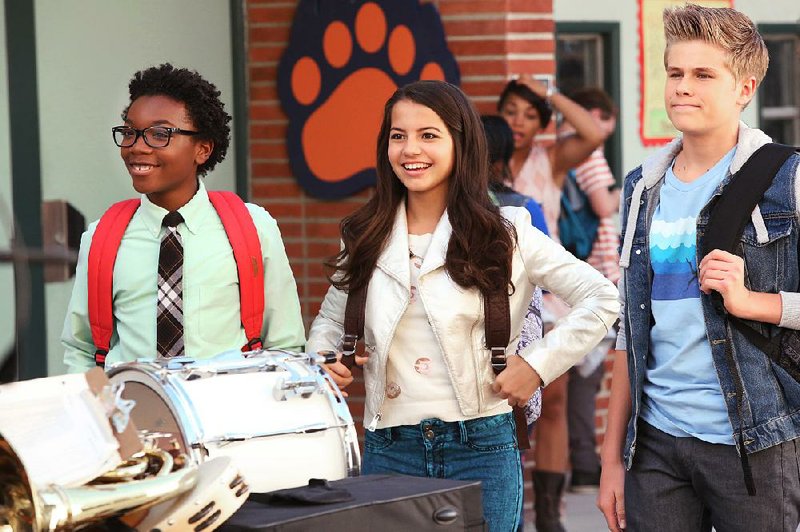 If you were wondering when the next family-friendly comedy highlighting the wacky, wacky world of middle school would arrive, wait no longer. It's here.

100 Things to Do Before High School debuts as a series at 7 p.m. Saturday on Nickelodeon. The hour-long pilot premiered last fall, but now it goes weekly with 26 episodes on the schedule.

The half-hour series comes with a kid-proven pedigree. It was created by the prolific Scott Fellows, also creator of such pre-teen favorites as Ned's Declassified School Survival Guide, Big Time Rush, Johnny Test and SuperNoobs! Fellows is also the chief writer of The Fairly OddParents.

These three are best buds at Pootatuck Middle School with, as the title implies, a bucket list of things to accomplish and a short time to do them. The list includes dealing with cliques, the obligatory school bullies, mean girls, and clueless teachers.

Here are the character roundups.

CJ Martin (Moner) is a normal middle school kid. She can't wait to take charge of the list and make the last years of middle school the best ever.

Note: Keep your eye on young Moner. She gets top billing and steals the show and it's no wonder. The Cleveland native has been acting since age 7, made her Broadway debut in Evita at age 10, starred in NBC's short-lived Growing Up Fisher, provided the voice of Dora's friend Kate in Dora and Friends: Into the City! and has been on the big screen in 2013's The House That Jack Built.

Christian "Crispo" Powers (Joyner) begins the school year with a new haircut and a newfound swagger that quickly earns him the title of coolest dude in school.

Fenwick Frazier (Toombs) is the class brainiac. He's the voice of reason in the group and tries to play by the rules because that's what a future world leader does.

CJ's parents (Henry Dittman and Stephanie Escajeda) are loving and caring as they try to give their two kids guidance to help them survive in the real world.

Ronbie Martin (Max Ehrich) is CJ's stressed-out older brother who offers her a frightening glimpse of what high school is really like.

Principal Hader (Lisa Arch) is known as Darth Hader by her students. When she walks down the hall, kids scatter in fear. She secretly wants everyone to like her.

Russell Hicks, Nickelodeon's president of content development and production, told The Hollywood Reporter, "Crossing that bridge into high school is a milestone and a journey filled with taking chances, expressing yourself and building friendships. Kids will be able to relate to this coming-of-age comedy that embodies that crazy and sometimes magical time in their lives."

Kids may relate, but parents will also enjoy watching with them. The young actors are talented and telegenic and the series is witty and fast-paced.

• Hannibal. This series is 180 degrees from the one above, but if you enjoy psychological horror/thrillers that don't take place in middle school, this one is for you.

Hannibal returns at 9 p.m. today for Season 3 with Hannibal on the run in Europe accompanied by his psychotherapist Bedelia Du Maurier. Here's a reminder of who's who.

Bonus: Gillian Anderson has been upgraded to a series regular. I'd watch her read the phone book.

Dr. Bedelia Du Maurier (Anderson). The lingering question: Is Bedelia an observer or a participant in Lecter's madness?

Will Graham (Hugh Dancy) is a criminal profiler and serial killer hunter.

Jack Crawford (Laurence Fishburne) is head of Behavioral Sciences at the FBI and Graham's boss.

Dr. Alana Bloom (Caroline Dhavernas) is a professor of psychiatry and consultant profiler for the FBI.

A new threat arises in the second half of the season -- a serial killer preying on families. The press calls him the Tooth Fairy, but he calls himself The Great Red Dragon.