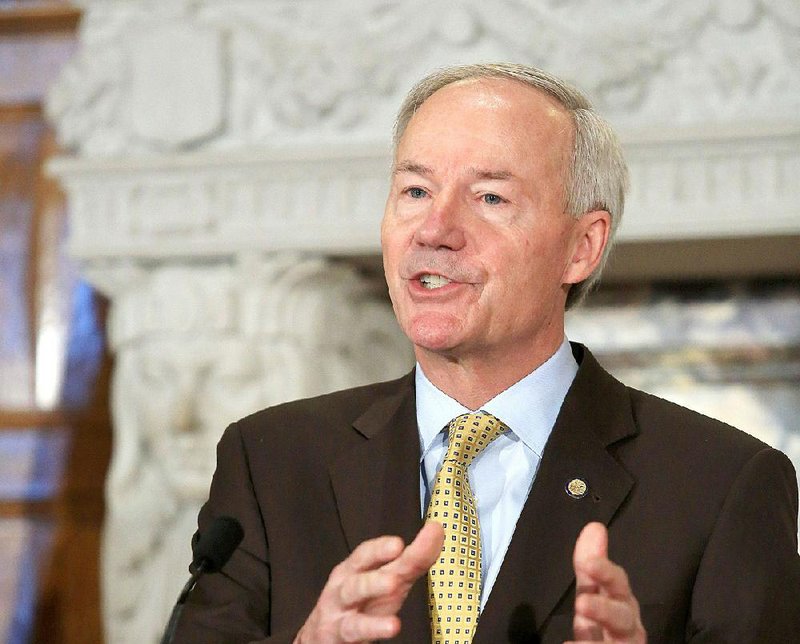 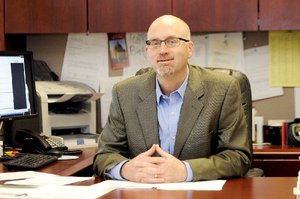 Photo by J.T. Wampler
Gary Ritter, director of the Office for Education Policy, part of the Department of Education Reform at the University of Arkansas in his office Thursday March 19, 2015.

Speaking at the University of Arkansas' Office for Education Policy's annual conference, Hutchinson praised the work of the Governor's Council on Common Core Review that recommended switching to the ACT tests for the 2015-16 school year and beyond.

The state this year administered for the first time the Partnership for Assessment of Readiness for College and Careers, or PARCC tests, in math and literacy to mixed reviews.

Hutchinson earlier this week accepted the test-change recommendations from the review council that he appointed earlier in the year. The governor has asked the Arkansas Board of Education to give final approval to the test change, which could be done at the board's 10 a.m. meeting today.

"I want to make sure we maintain high standards for education in Arkansas and high expectations," Hutchinson told the conference attendees at Heifer International's Little Rock headquarters.

"Secondly, I want to make sure that we are able to measure progress and results, and that there is a level of transparency for the public and for the state -- those who have a need to understand how the students are performing. And, finally, we want to make sure we can compare where we are in Arkansas with other states."

The governor said the ACT tests -- which include the ACT college entrance exam that would be given to every 11th-grader at no cost to students, and the newer ACT Aspire tests to be given in grades three through eight and in either ninth or 10th grades -- meet his criteria.

He also listed as benefits the ACT company's national recognition, students' familiarity with the brand, and the shorter four-hour time period required to give the ACT and ACT Aspire tests per grade as compared with the longer PARCC tests.

The governor acknowledged that few states currently require their students to take the ACT Aspire tests, but he predicted that more states will do so, which will eventually give Arkansas a way to compare its student achievement with that of other states.

A spokesman for the ACT said earlier this week that Alabama and South Carolina gave the ACT Aspire tests in the past school year and Wisconsin gave it at the early high school level.

Hope Allen, director of student assessment at the Arkansas Department of Education, addressed the conference via the Internet earlier Wednesday about the proposed testing changes. She said contract negotiations will begin with ACT Inc. when the state Education Board gives the go-ahead.

Like the PARCC tests, the ACT tests will be given online unless school districts ask for waivers to give paper-and-pencil versions. This year, the state gave more than 534,000 online PARCC tests as compared with zero online state-required tests the year before, Allen said.

Many districts conducted the online testing very successfully, she said, while others struggled with the technology. Regardless, she said, digital testing is here to stay because it is an integral part of modern society and student life, and it is cost-effective.

Allen also said that the ACT tests would look very similar to the PARCC tests because Pearson testing company is the same vendor that prepares and delivers both kinds of exams.

The ACT Aspire covers English, reading, writing, math and science. The state would discontinue administering the Arkansas Benchmark exam in fifth-grade science and the state's End of Course exam in high school biology if the ACT tests are used, she said.

ACT also provides interim or formative tests that can be used to measure student preparedness for year-end exams. Whether those will be provided on a statewide basis or made available to individual districts that want them will be decided in contract negotiations, Allen said.

Allen said the results of the tests would be returned to the state by early July. The delay would be the result of hand grading the writing and short-answer portions of the tests.

The PARCC exams given in nearly a dozen states in the just-ended school year replaced the Arkansas-created Benchmark and End of Course exams.

The state Education Board moved to the new tests after replacing state education standards with the new Common Core State Standards. The common set of math and English/language arts standards were adopted by Arkansas and a majority of other states in 2010.

The Governor's Council on Common Core Review was appointed this year to evaluate and possibly make recommendations for changes in the new standards. The council made its recommendations on testing in advance of any decisions on the standards because of the state's need to sign a contract on tests for 2015-16.

Gary Ritter, faculty director and founder of the Office for Education Policy, asked whether the state's teachers will need to shift to teaching lessons based on a different set of education standards as a result of any change now in the state-required tests.