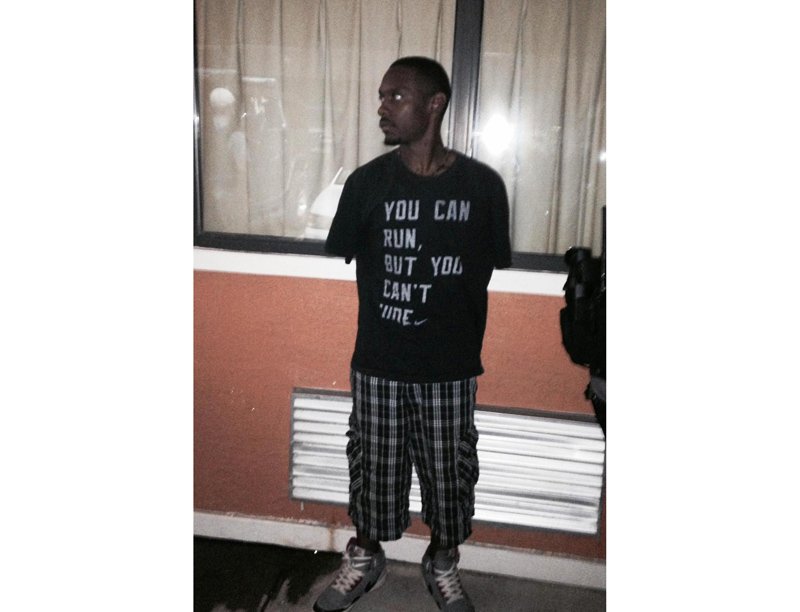 Tieren Watson is shown being arrested in this photograph released by the Benton Police Department.

Watson was named earlier this week as a potentially armed-and-dangerous suspect in a Saturday night shooting that left a woman in serious condition in Benton.

Authorities, including the Benton Police Department, U.S. Marshals and the Little Rock Police Department, tracked him to a room at the America's Best Inn at 7900 Scott Hamilton Drive and took him into custody shortly before 10 p.m.

He had on a Nike shirt that read in all-capital letters "You can run, but you can't hide."

"That's what it said and that's what he was wearing," said Benton Police Department spokesman Lt. Kevin Russell. "And yeah, he was hiding out there. But thankfully to all the partners we worked with, we were able to apprehend him."

Authorities had named Watson the suspect in a bulletin earlier this week that warned he should be considered armed and dangerous and asked for any tips to be called into investigators. Russell said his wardrobe choice the night of his capture was ironic "to say the least."

Watson was identified as the suspect in the shooting Saturday night in the 200 block of Valley Street.

Police say Watson was arguing with another person when he "started firing off rounds from a pistol resulting in one of them hitting" a woman who was also there.

The victim was initially listed in critical condition. A news release announcing Watson's arrest Wednesday said the victim is currently in serious condition.

Watson was booked into the Saline County jail on charges of first-degree battery, six counts of aggravated assault, two counts of endangering the welfare of a minor and possession of a firearm by a certain person.

Russell said the aggravated assault and endangering charges reflect others in the area when the shots were fired, including two minors.