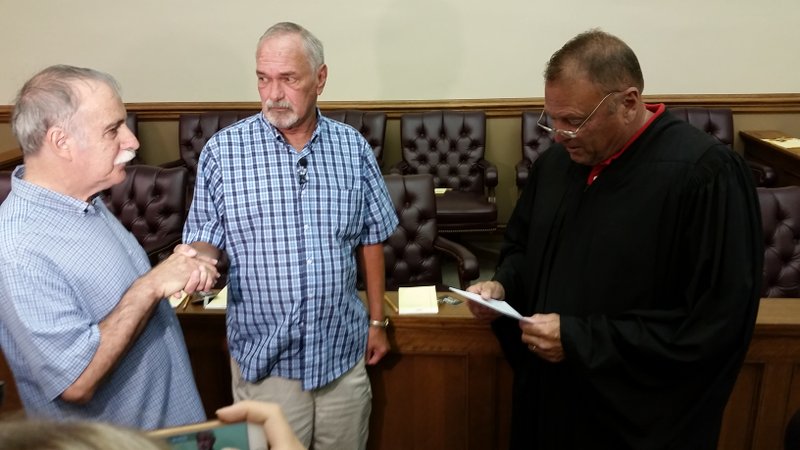 The first couple to receive a same-sex wedding license in Pulaski County after the U.S. Supreme Court legalized gay unions was married Friday by the same judge who struck down the ban in Arkansas last year.

Earnie Matheson, 65, and Tony Chiaro, 73, showed up at the Pulaski County Courthouse about an hour after the U.S. Supreme Court released its decision. They applied for and were granted a license at the clerk's office while reporters hovered around them and then embarked back into the rotunda to find someone to conduct the ceremony and wed them.

Someone suggested Circuit Judge Chris Piazza, who last year overturned the state's voter-approved amendment banning same-sex marriages, and the couple — who have been together 26 years — made their way to his second-floor chambers.

Piazza agreed and conducted the ceremony a short time later in his courtroom. It lasted less than two minutes and ended with the judge telling the couple they were "official" and shaking their hands.

"It's a day worth waiting for," Matheson said, tears in his eyes, of the occasion. "It's been worth it."

Piazza said he normally doesn't conduct marriages, but chose to do so Friday after Matheson and Chiaro arrived in his office.

"Really I just looked at their faces and realized how much this meant to them. I didn't plan on this, it just happened," he said, noting that he consulted with a representative for the county clerks of Arkansas to make sure it was all right to proceed. "I decided I'd be part of the process. And I'm proud to be."

Hundreds of couples were married at the same courthouse in May after Piazza's ruling, which was stayed days later pending a decision from Arkansas' Supreme Court. That court has yet to issue an opinion.

It was a different scene Friday with only two same-sex couples applying for license by noon. A third arrived shortly before 12:30 p.m. and a fourth soon after.

The second couple, 30-year-old Natalie Corson and 38-year-old Erica Byars, arrived about 11:15 a.m. and were hoping to be married a short time later in the courthouse.

Corson said she was thrilled to be "a part of history."

"We knew it was going to happen," she said. "I feel like we are the new civil-rights movement. There's no way they could deny two people their love."

Byars said the couple was packing for a move to Hot Springs when they found out about the ruling. They decided to drop everything and get married right away.

"We'll be moving into our new house as a married couple," Byars said, smiling, as the couple turned in their license after getting married in the courthouse rotunda.

Amanda Ward, 29, and Amanda Green, 31, were the fourth couple to get a license. They brought their 6-month old daughter, McKenna, and signed their paperwork at the clerk's desk, foregoing any sort of a ceremony because they already had a wedding in 2010.

"Today's all about the legality of it," Ward explained.

Matheson said he and Chiaro were also "optimistic" the nation's high court would rule in favor of gay marriage and had already bought their rings. He said he first saw the news online, turned on the TV and then quickly made plans to "make tracks" to the courthouse.

"I was sure hoping and praying" for the decision, Matheson said. "Lots and lots of prayers sent up over this."

Piazza, who said he learned of the U.S. Supreme Court ruling on the radio on his way to court Friday, said he felt "firm" in his ruling rejecting Arkansas' ban last year despite criticism. He said Friday's opinion from the U.S. Supreme Court was really set in motion "back when they said that states couldn't deny people of color and Caucasian and African-Americans to marry."

"That's the foundation for this," he said. "Once you understand that due process applies to all of us equally, then this is a slippery slide. It's an easy decision, to tell you the truth."

Same-sex marriage licenses are now available in Pulaski County, though none has yet been requested.

Afterward, he said he was "overjoyed" to deliver the news and begin offering the licenses.

"It's a really, really neat thing to be a part of the turning of history toward a good place," he said.

The Pulaski County clerk, who said he will first review the U.S. Supreme Court decision legalizing gay marriage and then consult with an attorney before licenses are issued in his courthouse.

But, Larry Crane said, the process could take as little as 30 minutes, adding that he expects same-sex marriage advocates will head to the courthouse to celebrate and that some couples will marry Friday.

"As soon as possible, we'll start issuing the licenses," Crane said Friday in an interview in his office moments after the opinion was released.

No same-sex couples were waiting at 9 a.m. when the nation's highest court announced its decision.

Same-sex licenses were issued in Pulaski County for several days last year after a circuit judge struck down the state's voter-approved ban. That ruling was later stayed pending an appeal to the state's Supreme Court, which is still pending.

Crane said he "expects there will be people that come [to the courthouse] to celebrate the decision."

"And I'm sure there will be some that come and apply for marriage licenses," he said, though he said it will likely fall short of the hundreds who lined up last year to get licenses ahead of the stay that was ultimately issued.

"Now people can see that it's a right that won't be taken away," he said. 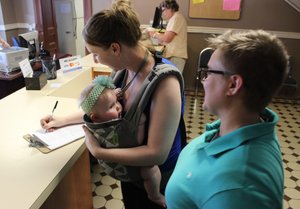 Photo by Gavin Lesnick
Amanda Ward, left, and Amanda Green, fill out paperwork for a marriage license at the Pulaski County Courthouse Friday with their six-month-old daughter, McKenna. 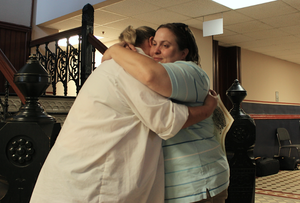 Photo by Gavin Lesnick
Natalie Corson, right, and Erica Byars hug shortly after they were married Friday at the Pulaski County Courthouse.
ADVERTISEMENT