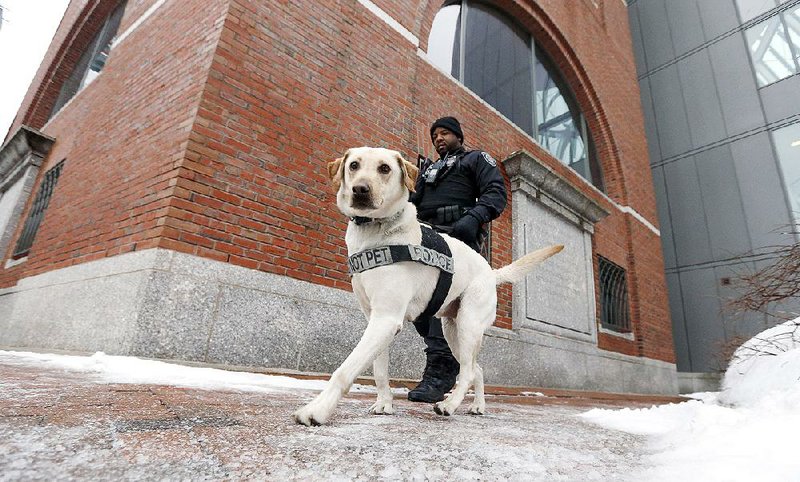 A police officer patrols with his dog Wednesday outside the federal courthouse in Boston as Dzhokhar Tsarnaev’s trial in the Boston Marathon bombings gets underway. (AP / MICHAEL DWYER )

BOSTON -- A lawyer for Dzhokhar Tsarnaev told a jury Wednesday that her client and his brother carried out the deadly bombings at the Boston Marathon almost two years ago. 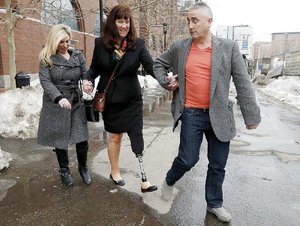 Photo by MICHAEL DWYER / AP
Boston Marathon bombing survivors Heather Abbott (left) and Karen Rand are escorted from the federal courthouse Wednesday in Boston after the first day of the trial of Dzhokhar Tsarnaev. 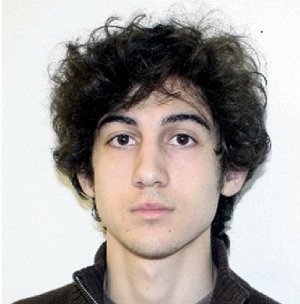 "It was him," attorney Judy Clarke said Wednesday in her opening statement in Boston federal court. Calling the events of April 2013 "incomprehensible" and "inexcusable," Clarke said they were "caused by a series of senseless, horrible, misguided acts carried out by two brothers."

By admitting that Tsarnaev took part in the attack, in which three people were killed and 260 injured, the defense is setting the stage for the second phase of the trial, in which a jury must determine whether the defendant should be executed.

Soon after the trial began, Tsarnaev's defense team was dealt a setback when Judge George O'Toole Jr. ruled to limit the degree to which the defense could bring up Tamerlan Tsarnaev, the defendant's older brother, before the sentencing phase of the trial.

The ruling will probably hamper the defense lawyers because Tamerlan Tsarnaev, whom they have cast as a corrosive and bullying influence on Dzhokhar Tsarnaev, figures heavily in their narrative. Clarke sought to help her client avoid the death penalty by shifting much of the blame to the older Tsarnaev.

Tamerlan Tsarnaev, a purported radical Muslim, died in a shootout with police days after the marathon blasts.

"It was Tamerlan Tsarnaev who self-radicalized," Clarke later told the jury. "It was Dzhokhar who followed him."

Prosecutors objected to Clarke's argument, and the judge cut her off before she could discuss her client's upbringing.

Clarke began her opening statement by acknowledging the sadness and pain surrounding the bombings. "We meet in the most tragic of circumstances," she said. She made it clear that the Tsarnaevs carried out the bombings -- showing pictures of the brothers walking, with backpacks, near the finish line.

She said "there's little that occurred the week of the bombings" that the defense would dispute.

But, Clarke said, the case was not just about guilt; it was also about penalty, given that it is a capital-murder trial.

Prosecutors began their opening statement by emphasizing the deception at the heart of the attacks on one of Boston's premier sporting events.

"The defendant wasn't there to watch the race," said William Weinreb, an assistant U.S. attorney, as he began the government's opening statement.

Weinreb accused Tsarnaev of taking a pressure-cooker bomb that was "designed to tear people apart and create a bloody spectacle."

"He pretended to be a spectator," Weinreb continued, "but he had murder in his heart."

To show that the attacks were calculated for maximum carnage, prosecutors called as the trial's first witness Thomas Grilk, executive director of the Boston Athletic Association, which oversees the 118-year-old marathon.

Grilk said as many as 500,000 spectators turn out for the race each year, with people lining the streets in cities and towns along the 26.2-mile course.

The jury was then shown a video of the first explosion. It showed a blast of smoke, police officers running toward the scene and runners looking over their shoulders.

Explosions from the bombs sent fireballs stories high and sent shrapnel ripping through flesh, the prosecutor said in his opening statement. One of the victims, 8-year-old Martin Richard, "bled to death on the sidewalk," Weinreb said.

Weinreb also sought to pre-empt defense arguments that Dzhokhar was in his brother's thrall.

"Even though he and his brother had different roles in committing these crimes, they were equally guilty," he said. Dzhokhar "believed he was a soldier in a holy war against Americans, and he had won an important victory," he said.

The prosecution mostly used its opening statement to recount the story of the bombings and the days after, when police searched for the suspects.

After a night of bedlam that included the killing of a Massachusetts Institute of Technology police officer, Sean Collier, authorities shut down the greater Boston region during a manhunt and eventually captured Dzhokhar Tsarnaev, then 19, hiding in a dry-docked boat in a backyard in nearby Watertown, Mass.

Authorities said that inside the boat, Tsarnaev had scrawled on the sides that the bombings were retribution for U.S.-led wars in Iraq and Afghanistan.

In its narrative, and with its witnesses, the government is likely to follow the outline of events as laid out in the June 2013 indictment against Tsarnaev, and to show the full force of the bombings through such exhibits as the autopsy photos of the three who were killed at the finish line: Martin; Lu Lingzi, 23, a Boston University graduate student; and Krystle Campbell, 29, a restaurant manager.

The defense lawyers have the tougher job. Although Tsarnaev has pleaded innocent to the 30 federal counts against him, 17 of which carry the death penalty, no one has proclaimed him innocent.

Victims and their families arrived by the busload for the start of the trial. About two dozen victims took up one entire side the courtroom Wednesday, listening somberly as Weinreb described the carnage. Several hung their heads and appeared to fight back tears.

Among those in court was Heather Abbott, who lost a leg in the attacks.

Tsarnaev's lawyers tried repeatedly to have the trial moved out of Massachusetts, arguing that the emotional effect of the bombings ran too deep and that too many people had personal connections to the case. Their final request was denied in court Wednesday.

The panel of 10 women and eight men was chosen Tuesday after two months of jury selection, interrupted repeatedly by snowstorms and the requests to move the trial, which is expected to last three to four months.

Information for this article was contributed by Janelle Lawrence and Chris Dolmetsch of Bloomberg News; by Katharine Q. Seelye, Jess Bidgood and Richard A. Oppel Jr. of The New York Times; and by Denise Lavoie of The Associated Press.