Harris, DHS ties at times friendly, at others strained 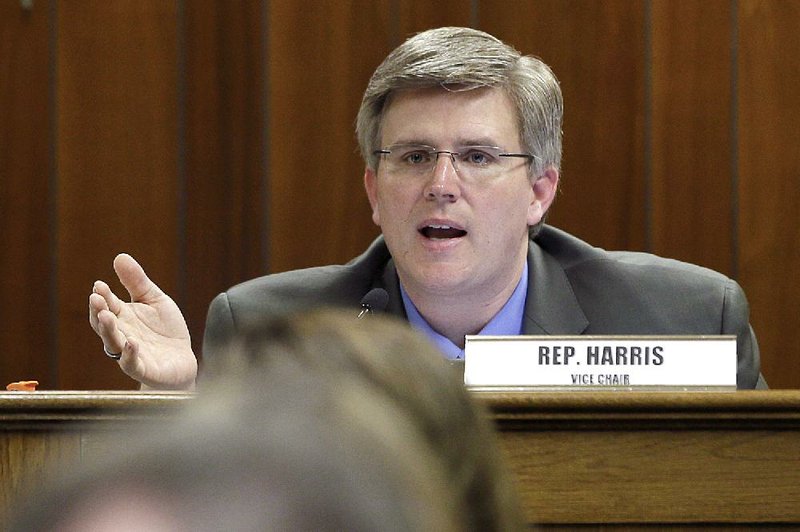 Rep. Justin Harris, R-West Fork, asks a question Friday in the House Committee on Aging, Children and Youth, Legislative and Military Affairs. Harris is vice chairman of the panel.

Despite claims that state adoption officials fought him all the way in his effort to adopt, the state legislator who ultimately "re-homed" his daughters -- ages 3 and 5 -- to a sexual predator continued to work closely with top agency officials, sometimes pushing their legislative agenda, according to state emails.

Bills on adopted children in works

But the emails between Rep. Justin Harris, R-West Fork, and Department of Human Services officials, and video from the 2013 House legislative session, also show an at-times confrontational legislator willing to block routine appropriations legislation when he didn't get his way.

Harris declined Friday and Saturday to be interviewed for this article. An attorney for him, Jennifer Wells, said Harris' relationship with DHS, and the head of its Division of Children and Family Services, Cecile Blucker, was an "on again, off again" type of relationship.

Harris has accused DHS officials of trying to block the attempts by him and his wife, Marsha, to adopt a pair of girls three years ago. And then, when Harris no longer wanted the children, he says Blucker, who is based in Little Rock, prevented him from returning them to the state.

His adoption dreams, he said, became a "nightmare" and a "living hell," and he's put the blame on the state.

A third sister, who was a couple of years older than the 5-year-old, was returned to DHS after five months after she disclosed plans to kill the Harris family, according to Harris.

"We reached out to DHS numerous times, and we were met with nothing but hostility," Harris at a recent news conference.

The younger children's foster parents, who opposed the adoption by the Harrises, said Blucker intervened on Harris' behalf during the adoption process and that Harris repeatedly stressed his links to Blucker as he pushed to get custody of the girls.

DHS officials have declined to describe Blucker's involvement in the Harris adoption, saying state law prevents them from doing so.

An analysis of emails obtained by the Arkansas Democrat-Gazette through the Freedom of Information Act found an often collegial working relationship between Blucker and Harris, replete with favors and offers for assistance from both sides.

Many of the emails regarded Harris' West Fork day care center Growing God's Kingdom, which has received nearly $4.2 million in state and federal funding since 2010.

At least 30 emails, according to DHS spokesman Amy Webb, were withheld because they dealt exclusively with individual adoption and custody cases. It was unclear how many of them might cast light on Blucker's role in the Harris adoptions.

The emails that were provided to the Democrat-Gazette show that in one instance, Harris emphasized his ability to stop DHS funding in its tracks.

Several of the emails are from March 2013, when Harris was pushing to get the adoptions approved.

That month, Harris asked for a meeting with DHS officials and indicated that his wife might attend as well.

The meeting didn't get scheduled as quickly as Harris wanted. He later blocked legislation that DHS needed.

The routine bill shepherded through the Legislature by fellow Republicans had already passed in the Senate 34-0. It eventually passed 88-0 in the House, with Harris not voting.

But the first time it came up in the House, Harris sunk it.

"And I have requested that their budgets be stopped 'til I get a meeting, and it hasn't happened, and that's why today, just out of respect, I asked for this appropriation to be held," he said.

He urged colleagues to help him block the measure, and they backed him up.

After the vote, responding to a Blucker email asking which individuals should be invited to the meeting, Harris responded:

"Doesn't matter, [I] went to the well and spoke out against SB737, an appropriation [of $1 million for DHS], it failed miserably. Only garnered 36 votes. I told them there was a 7-year-old girl stuck in an institution, and yet waiting on a meeting."

Wells, Harris' attorney, said the girl in question wasn't one of the three sisters taken in by the Harrises. The girl belonged to a constituent who'd reached out to Harris for help with her daughter, according to Wells.

The Little Rock attorney said Harris never froze budgets or blocked legislation in order to advance his own adoption efforts.

In addition to blocking the vote on SB737, Harris sent an email to Blucker on March 14 with the subject line "SB213," a reference to another DHS appropriations bill. In it, he says there are "Medicaid fraud issues that I know about, and I don't want to go there."

The next lines in the email have been redacted by DHS.

Asked what "Medicaid fraud issue" Harris was referring to and to what end, DHS spokesman Webb said she didn't know and suggested that Harris might be the one to answer that.

Wells said Harris had been informed that a mental health provider in Northwest Arkansas might be overbilling Medicaid for services rendered and that he wanted DHS to fix the problems with the provider.

Many of the emails showed that Harris and Blucker worked together in crafting policy.

Blucker wrote Harris on March 11, 2013: "I was just checking with you this morning to see if you had any questions or concerns with the proposed legislation concerning the Child Maltreatment Code and if you were [in] agreement to sponsor the legislation. Just let me know."

Later that morning, Harris responded that he was headed to Little Rock and would file it.

Later that month, Blucker wrote Harris: "I was going through my list of legislation this afternoon and wanted to follow up with you on [House Bill] 2042 to see if the attachment addresses the issue your constituent had ... Thanks again for sponsoring some of our legislation. Hope you and your family have a wonderful Easter."

Harris, who serves on the Aging, Children and Youth, Legislative and Military Affairs Committee, replied: "It's been an honor to run the legislation. ... I still want to say it's not at your level I see issues with. You and your staff have impressed me, not because you have always told me what I've always wanted to hear, but ya'll have actually explained it when I was wrong ... I passed [The Child Maltreatment Act changes] off the floor yesterday."

While sponsoring legislation for DHS and serving as chairman of the committee's Children and Youth Subcommittee, Harris was months into his initial trial phase of adoption of the two girls whom he would later re-home.

The adoption was finalized around the end of the legislative session, Wells said.

Harris has described the process as contentious and suggested that given his past fights with DHS over religious instruction at his preschool to students whose enrollment was bankrolled with public dollars, the agency was dead set against him.

But, Craig and Cheryl Hart, a former Fayetteville couple who had been foster parents for the girls the Harrises later adopted, said front-line social workers may have resisted Harris' plans to adopt, but the legislator had support from Blucker and the agency's Little Rock office.

Craig Hart said the Harrises tried to ram the adoption through, and that whenever there was a roadblock presented by someone in the process, he'd call Little Rock and talk to Blucker.

The Harrises, Craig Hart said, weren't the only couple seeking to adopt the girls.

"It wasn't aboveboard," he said. "We all went through the hoops and waited our turn. It takes a vetting process. We all have to wait our turn. They have to do what everyone else has to do."

Cheryl Hart said it was clear that Blucker was pulling strings for Harris from Little Rock despite objections from caseworkers involved on the ground level.

"Whenever he didn't get his way ... he would call Little Rock. The next thing we know ... at court and different meetings, he'd say he'd called Cecile, or Cecile is OK with it, and Cecile said this is what you need to do," Hart said. "He dropped her name in every conversation."

Craig Hart said that Harris rushed through one meeting because he was going to be late for an appointment in Little Rock. He said Harris told him he'd have to speed to get there on time, but it was OK because he has special legislative plates and the Arkansas State Police would look the other way.

"That's the kind of statement he would make to make us think he was special," Craig Hart said. "He gave the impression that rules didn't apply to him."

Asked what role Blucker played in the Harrises' adoption and whether the legislator received special treatment in the process because of his elected position, Webb said she couldn't speak about individual adoption cases.

"I know [Blucker] routinely talks to people when they have questions related to her division ... whether a foster parent ... a judge, a legislator, an attorney ad-litem. ... She tries to make herself available because we want to be there to support families and to support children," Webb said. "You don't have to be a legislator to talk to [Blucker]."

Asked if Harris thought it was inappropriate for him to work so closely, and sometimes combatively, with an organization while he was trying to push a personal adoption through that organization, Wells said no.

"It's his job as a representative to aid people in [his district]. ... DHS is supposed to be working for the people, and it's the [Legislature's] job to keep them accountable."

As has been reported, Harris re-homed the adopted girls to a former employee of his, Eric Cameron Francis -- who is now serving a 40-year sentence for sexual assault -- in late October 2013.

The child who was raped by Francis revealed the abuse to investigators shortly after her sixth birthday.

On Nov. 4, days after the girls left his home, Harris fired off an email to Sandi Doherty, a DHS official, as well as Blucker. The subject line read: "Rude."

"Sandi, after talking to Marsha [Harris], you were not very pleasant. [Blucker] is never to[o] busy to deal with matters concerning foster care ... to take the time to speak with me," Harris wrote. "This is not the time to have a break down in our relationship."

Wells said Harris did not recall that email or the matters at stake.