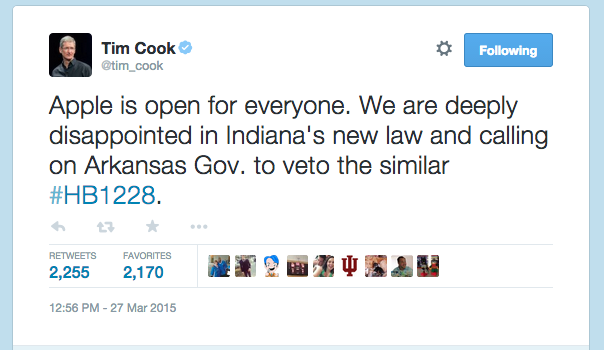 Apple CEO Tim Cook on Friday posted tweets to his more than 1 million followers critical of House Bill 1228, the Conscience Protection Act. That came a day after Yelp CEO Jeremy Stoppelman wrote in an open letter on the company blog that laws like HB1228 set a "terrible precedent" and hurt the economies of states that enact them.

HB1228 on Friday passed the Arkansas Senate; a vote in the House to approve amendments added in the Senate is the final step before it would head to Hutchinson's desk. He said Thursday that he plans to sign it into law.

Hutchinson issued a statement reiterating his support for HB 1228 after being asked about Cook's tweets, which were posted shortly before 1 p.m. and had each racked up more than a thousand retweets within an hour.

“As I previously stated, I will sign this bill as amended," Hutchinson said. "This bill is designed to protect the religious freedoms of all Arkansans. It’s no different than legislation that has passed in 20 other states, from Illinois to Connecticut. Arkansas is open for business, and we recognize and respect the diversity of our culture and economy.”

Opponents of HB1228 have said it will enable discrimination of gay people. Supporters contend it's a necessary step to bolster religious freedom.

Cook, who in 2011 succeeded Steve Jobs as CEO of technology giant Apple, likened HB1228 to a similar measure that was signed into law in Indiana this week.

"Apple is open for everyone," Cook wrote. "We are deeply disappointed in Indiana's new law and calling on Arkansas Gov. to veto the similar #HB1228."

He followed that post with a second two minutes later: "Around the world, we strive to treat every customer the same — regardless of where they come from, how they worship or who they love."

Stoppelman, in the Yelp letter, noted that then-Arizona Gov. Jan Brewer vetoed a similar bill there last year after criticism that such a law would lead to discrimination.

"I encourage states that are considering passing laws like the one rejected by Arizona or adopted by Indiana to reconsider and abandon these discriminatory actions," Stoppelman wrote, adding: "(We’re looking at you, Arkansas.)"

Stoppelman also said it would be "unconscionable to imagine that Yelp would create, maintain, or expand a significant business presence in any state that encouraged discrimination by businesses against our employees, or consumers at large."

In addition to the two CEOS, the Human Rights Campaign has also called on Hutchinson to veto the bill if it makes it to his desk. The group Thursday said it had placed an ad in a newspaper serving Silicon Valley in California declaring that Arkansas is "closed for business due to discrimination."

With Republican Gov. Mike Pence’s signature, Indiana on Thursday became the first state to enact a religious-objections law among about a dozen where similar proposals have been introduced this year.

Indiana’s Religious Freedom Restoration Act, which takes effect in July, will prevent state and local governments from imposing a "substantial burden" on a person's free exercise of religion, unless the government can demonstrate a compelling reason. It mirrors a federal law enacted in 1993; similar statutes are on the books in 19 states. Critics say the law could pave the way for discrimination against gays, giving business owners, landlords and others the right to refuse them service under the guise of religious protection.