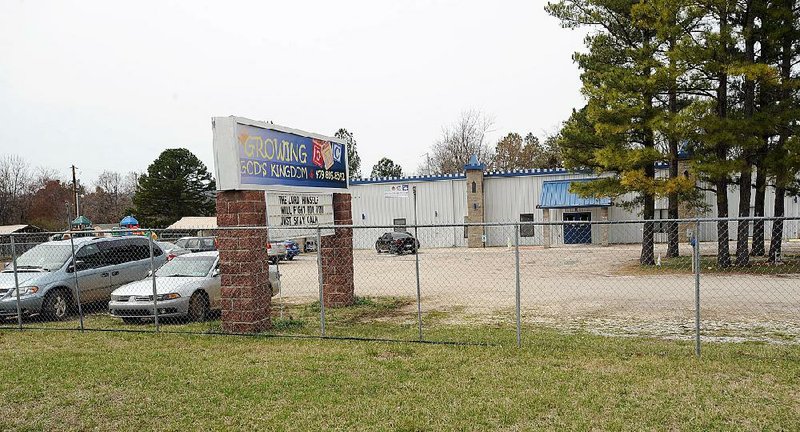 A sign outside the Growing God’s Kingdom preschool in West Fork on March 20 proclaims: “The Lord Himself will fight for you. Just stay calm.”

WEST FORK -- A for-profit preschool owned by state Rep. Justin Harris and his wife receives about 90 percent of its annual funding from the government, according to audits on file with the Arkansas Department of Human Services. 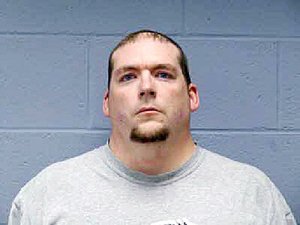 Photo by AP/Benton County Jail
This photo from the Benton County Sheriff shows Eric Cameron Francis who pleaded guilty in November to three counts of sexual assault in the second degree. Arkansas Gov. Asa Hutchinson has instructed the state to review adoption procedures after Rep. Justin Harris of West Fork gave his adopted daughters to Francis, who admitted to abusing one of them and two underage girls Francis knew through church. 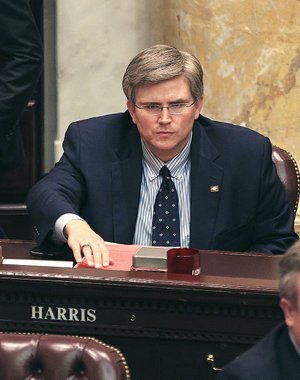 Photo by Staton Breidenthal
Rep. Justin Harris, R-West Fork, votes on a bill in the House chamber Friday at the state Capitol that would prohibit the re-homing of an adopted child. 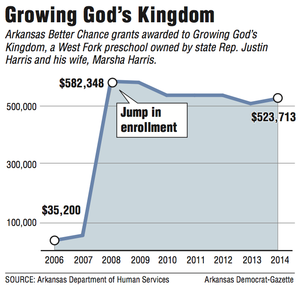 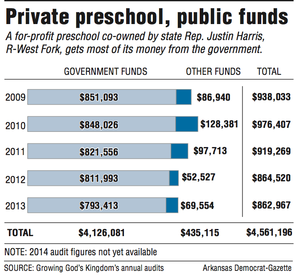 Harris' Growing God's Kingdom preschool in West Fork was the impetus for a DHS rule in 2012 to make sure state funds weren't being used by preschools to teach religion, which would be an apparent violation of the First Amendment of the U.S. Constitution.

But religion still permeates the handbook at Growing God's Kingdom.

Under "Statement of Faith," the current handbook says: "GGK teaches children the word of God. GGK believes that God the Father, God the Son and God the Holy Spirit are all components that make up our one God. The only way to Heaven is to accept Jesus as their personal savior."

According to the audits -- which covered calendar years 2009 through 2013 -- Growing God's Kingdom's annual budget was about $900,000. The preschool receives about 60 percent of its funding from the state, 30 percent from the federal government and 10 percent from tuition.

The federal money includes funding from the U.S. Department of Agriculture for meals and money from the Child Care and Development Fund, which assists low-income families in obtaining child care so they can work or attend training/education programs. The Child Care Development Fund provides vouchers or grants that can be used for "public or private, religious or non-religious, and center or home-based care," according to the U.S. Department of Education.

Harris, who has been embroiled in an adoption controversy, responded to a few questions about the preschool via text message Thursday before referring a reporter to his attorney, Jennifer Wells of Little Rock, to answer other questions.

"My family has been hurt enough," wrote Harris. "You can speak to my attorney."

Harris has been under scrutiny since the Arkansas Times first reported on March 3 that he and his wife, Marsha, adopted two girls -- ages 5 and 3 -- then gave them to Eric Cameron Francis of Bella Vista.

Francis, a former teacher at Growing God's Kingdom, was arrested last April and accused of molesting three girls, including the older girl from the Harrises' home. Francis pleaded guilty to two counts of sexual assault and is serving a 40-year sentence.

Harris has said the two girls he and his wife adopted had been scarred by past abuse and were too difficult for them to raise, turning his life into a "nightmare" and a "living hell."

Francis and his wife were raising three children who had been adopted from abroad, Harris has said, adding that he thought giving the girls to the Francis family was a "perfect" solution to his problem.

Harris said he had no idea that Francis, a minister, posed a threat to children.

The relocation of the girls sparked public anger and legislation to outlaw the practice of "re-homing" adopted children in Arkansas. Harris subsequently voted for two bills -- House bills 1648 and 1676 -- that would outlaw "re-homing." HB1676 would make the "re-homing" of a minor a felony.

There were no votes in the House or Senate against either of the bills. The governor has indicated support for both measures.

Harris, 39, is a Republican in his third term representing District 81.

Harris said he is complying with the current DHS rules regarding religion at Growing God's Kingdom because Bible classes are now taught before and after the official seven-hour school day funded with grants from Arkansas Better Chance, the state's preschool program for low-income families.

According to the Growing God's Kingdom handbook, Arkansas Better Chance funds have never been used for "the Christian aspect of our program."

"Preschool begins at 7:30 and ends at 3:30," according to the handbook. "However, your child may be enrolled into our before and after-care program. While in our program, your children will be learning the word of God ... We feel that one of the most important aspects of our program is that we teach the children about Jesus Christ and express to them the love of Jesus through actions."

On the following page, the handbook reads: "The curriculum is a Baptist-based curriculum. However, we do not teach doctrine, we teach Bible. ... We teach the children Bible stories, memory verses, morals, values and how to pray."

The 2012 rule added a Chapter 23 to the Arkansas Department of Education's rules governing the Arkansas Better Chance program. Section 23.04.3 states: "All ABC instruction and instruction materials must be secular and neutral with respect to religion."

When examining whether public funds are being properly used, Section 23.02 states, "the question in every case is whether state funds impermissibly aid a religiously based or affiliated entity in discharging its religious mission."

Harris said teachers stopped leading the pupils in prayer in 2012, but children can say their own prayers and can say group prayers as long as they're not led by a teacher or administrator.

In 2012, Harris said he was considering having children sing prayers before meals because the regulations allow for some religious music, but Harris said Thursday that the prayer songs were never implemented and his comment was meant as a joke. When he mentioned the plan in 2012, Harris said the song he had in mind was "God Our Father," which contains this line repeated several times: "God, our Father, we thank you for our many blessings."

According to a site inspection on Feb. 6 of this year, there were "No teacher-led religious activities observed. However, children were observed singing a religious song during transition [the time between listed activities]."

Sarah Mullens, the Arkansas Better Chance compliance reviewer, wrote that the school administrators should review Section 23.04.4 for guidance for activities throughout the day. That section of the rules states: "No religious activity may occur during the ABC day and no ABC funds may be used to support religious services, instruction or programming at any time."

Amy Webb, a DHS spokesman, said Mullens didn't know whether a teacher had led the children in singing the religious song.

Harris said in a text Thursday that religious songs are allowed as long as the same number of secular songs are sung.

"As far as singing religious songs, as have been discussed in the education committee in the past, there is a 50/50 split," wrote Harris. "In our case, it's probably more like 80 percent fun secular preschool songs and 20 percent fun Sunday school preschool songs."

The 2012 rule was hammered out by lawyers from the Arkansas departments of Education and Human Services after a Washington, D.C., organization filed a complaint in 2011 saying Growing God's Kingdom had been using state money to fund religious instruction, in violation of the U.S. Constitution.

Ian Smith, an attorney for Americans United for Separation of Church and State, said the organization would like to be notified if Growing God's Kingdom is violating the 2012 rule.

Incorporated in 2004, Growing God's Kingdom went through a dramatic change in 2007, when the Harrises applied for and were granted 88 "slots" for children who qualify for Arkansas Better Chance grants. Now, the preschool has funding for 110 children who get the funding and a total enrollment of 159.

"It was a family in-home pre-K that was tuition-pay only for the first two years," Harris said via text. "Then we applied for the ABC grant."

The preschool also moved into a new building around that time.

Beginning with the 2007-08 school year, and continuing ever since then, Growing God's Kingdom has received more than $500,000 a year in Arkansas Better Chance grants. The grants are available in a 60-40 match, with 40 percent of the school's funding coming from local sources. Webb said federal funding can be considered local matching funds.