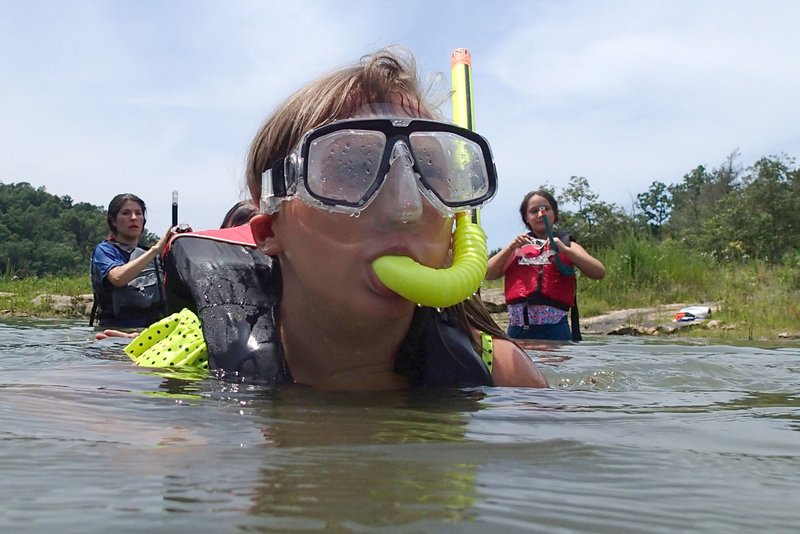 The Hobbs State Park-Conservation Area, at 12,000 acres, is Arkansas' largest state park. It has 34 miles of hiking trails and a shooting range.

About nine nearby waterways can be floated, including the country's first national river, the Buffalo. The Kings River, Illinois River and Elk River are local favorites.

Smithsonian.com listed the drive through Northwest Arkansas as one of its eight best fall color drives in America last year. The report said drivers should leave Bentonville and enjoy the "spectacular hardwood forests" on the way to Jasper, then float in a small boat 10 miles along the Upper Buffalo National River "framed by 500-foot-high bluffs and dense flame-tipped oak forests," before stopping in the Botanical Garden of the Ozarks in Fayetteville.

Outside Magazine ranked the University of Arkansas among its top 25 for Outdoor Colleges in 2012, ranking 21st on the list. The ranking states Fayetteville is "pretty outdoorsy, drawing people from all over the South to its trails and greenways -- and its 218 yearly days of sun."

Ron Duncan, chairman of the Arkansas Game & Fish Commission panel of commissioners, said the area has almost every kind of warm-water game fish.

Trout are the stars of the cold-water fishing game, with good trout fishing at the White River below Beaver Dam. During winter, Lake Atalanta in Rogers, Lake Springdale and the pond at Murphy Park in Springdale are stocked with trout by the commission.

Duncan of Springdale is a renowned stream angler. His favorite waterway is the War Eagle River where he routinely catches heavy-weight largemouth and smallmouth bass. The Kings and Buffalo rivers are other good fisheries. The Elk River and Indian Creek, in southwest Missouri, are popular for fishing and paddling.

The agency is in the process of revising its master plan for Beaver. Three workshops were held in mid March to seek comment on any changes lake users may desire. The plan hasn't been revised since 1976, said the Corps' Sean Harper, project manager at Beaver Lake.

Northwest Arkansas has thousands of acres of public land. The McIlroy Madison County Wildlife Management Area is massive at 14,000-plus acres. Hobbs State Park in east Benton County is the only state park where hunting is allowed. Firearms deer hunting is by permit only, but hunters may pursue small game or deer with archery without permits.

Hobbs is the only state park with a public shooting range. The range is used by about 10,000 people each year, said Steve Chyrchel, an interpretive naturalist at Hobbs.

With 35 miles of trails, hiking is the most popular activity in the park. Mountain biking on the multiuse trail isn't far behind.

Nathaniel Sabin of Siloam Springs makes a trip to Hobbs a couple times a month during nicer weather. He mostly uses the outdoor shooting range and will occasionally add a hikes.

"That's only because a lots of people like using that range," he said.

Seven women jumped out of their vehicles at Hobbs State Park Visitors Center on a recent Monday. The group had just completed the Kings River Overlook Trail in Madison County and stopped by Hobbs to see an exhibit.

"We have hiked most of the trails here," Becky McCoy of Bentonville said of Hobbs.

McCoy and her friends are a part of Women Out Walking. The group was started by some Bentonville friends in 2005. It has about 11 members. McCoy said the group is a way to socialize, stay healthy and visit with nature.

Hobbs is a great resource, McCoy said, because it is close to cities in Northwest Arkansas.

State park officials in Little Rock are talking about making improvements each year to the historic Van Winkle Hollow area. The hollow was once home to a thriving sawmill community, founded in the 1800s by Peter Van Winkle. There's a walking trail in the hollow, interpretive signs and a stream.

A wall that was part of a garden area may be restored, Chyrchel said. The Peter Van Winkle homesite may also get some improvement.

The rugged landscape at Hobbs prevents a lot of development, Chyrchel said. Eventually some campsites will be built, but that is years down the road, he said.

"The beauty of that is, this beautiful 12,000 acre paradise will remain unspoiled for everyone to enjoy," he said.