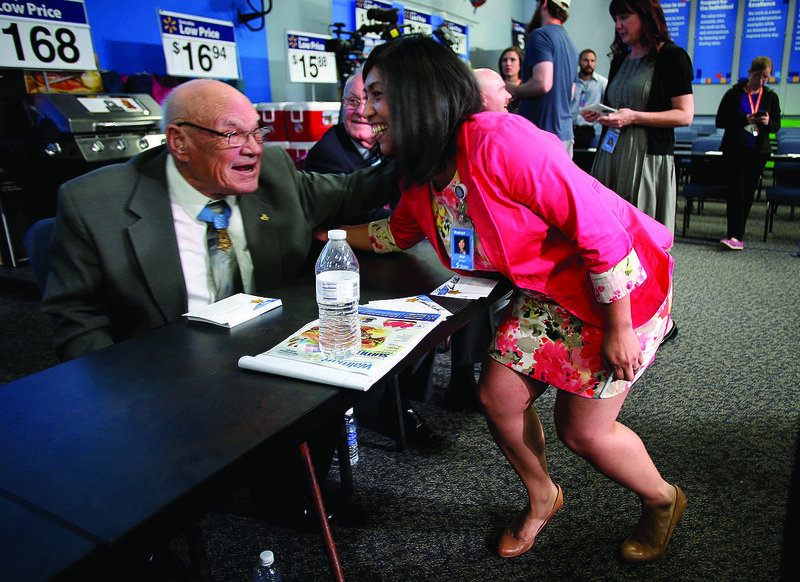 BENTONVILLE -- Touring the country and speaking about his war experience is a type of therapy, Army Specialist Ty Carter said Thursday.

Carter was one of six Congressional Medal of Honor recipients who spoke at a town hall event at the Wal-Mart Home Office on Thursday.

The year listed is when the event for which they earned the medal took place.

Wal-Mart launched its Veterans Welcome Home Commitment two years ago on Memorial Day and pledged to hire 100,000 military veterans in five years. It has so far hired 92,000 veterans. Of those, nearly 8,000 have been promoted since being hired.

He addressed the issue of mental health and said he disagreed about the description "disorder" being part of the term Post Traumatic Stress Disorder.

Post traumatic stress is an instinctive and reflexive response of the body and mind to recall a traumatic incident in order to avoid repeating it, he said. Most commonly, it happens after a car accident.

"When people tack on the 'disorder,' it's an insult to who we are and how we grow," Carter said, adding post traumatic stress can aggregate other disorders or physical ailments, just as all stress does. "By removing the 'D,' by removing the stigma, we can help individuals seek the help that they need."

Mental health improvement is a choice, he said. Those suffering need to make the decision to see counseling, to talk about it.

Carter received the Congressional Medal of Honor in 2013 for work he did while in Nuristan Providence, Afghanistan, on Oct. 3, 2009.

Carter didn't detail the day's events, but his actions are recorded with the Congressional Medal of Honor Society. Carter woke with his fellow soldiers to an attack by 300 enemy fighters. Carter ran twice through more than 100 yards of enemy fire to rescue a critically wounded soldier, then to check on a fallen soldier and recover the squad's radio, which allowed the troops to coordinate their evacuation.

Carter was one of two recipients who served in Afghanistan who was in Bentonville. The other four were Vietnam veterans. There are only 79 living recipients of the military's highest honor.

Wal-Mart brought the Medal of Honor recipients to Northwest Arkansas as part of the Congressional Medal of Honor Character Development Program. The veterans will visit Bentonville and Rogers schools today to talk about character in the context of their military experiences.

Retired Army Sgt. First Class Bennie Adkins said they get to speak to various audiences around the country multiple times a week. He said he's seen young people be receptive to their message that "whatever you would like to be, do it honestly with integrity and be the best that you can be in whatever you want to be."

Adkins earned his medal while in Vietnam in 1966. He rescued fellow troops while wounded when a large Viet Cong force attacked his camp. Then he and a small group fought their way out of the camp and evaded the Viet Cong for two days until they were rescued by helicopter.

The veterans spoke of their service to their fellow service men and women and how they were a family.

"All of us know that you don't go and get the medal. The medal comes to you," said retired Army Maj. Bruce Crandall. "You don't know that anything like that is going to happen that day."

Crandall earned his medal for flying his helicopter into a battle area in Vietnam 22 times under heavy fire to deliver soldiers and ammunition and also to evacuate the wounded. That was on Nov. 14, 1965. He received his medal in 2007.

"I couldn't leave those people on the ground," he said of why he kept returning to the battle zone. "You wouldn't. You would've done exactly what I did."

Crandall said he hopes the students they speak with today leave knowing they can be what they want to be.

Amy Graham, who works in Walmart in Derby, Kan., was in town for meetings and was glad to be able to attend the event. She had the veterans sign her "Medal of Honor" book.

She said she learned about the Medal of Honor 10 to 15 years ago and became fascinated with the military's highest award.

"These gentlemen that are standing here represent not only themselves, but their fellow servicemen that they risked life and limb to save, to protect," she said. "What they've done for the people that they've served with is just phenomenal."

Melissa Gute can be reached at mgute@nwadg.com or on Twitter @NWAmelissa.