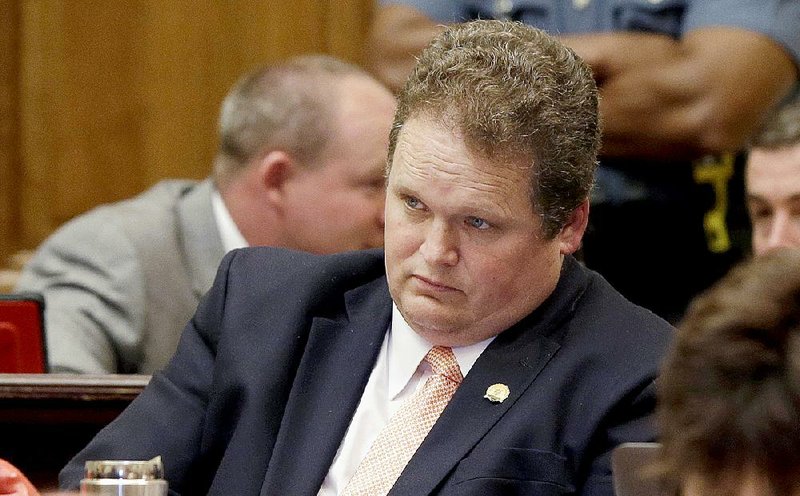 Rep. Nate Bell, R-Mena, speaking against moving up the state’s primary from May to March, called on fellow House members to carefully consider the change. “It needs to be a thoughtful, deliberate well-thought out process,” he said. “Like my old Cherokee grandmother used to say to me, if it’s a good idea now, it’ll be a good idea later.”

Bills shifting the state's 2016 primary elections from May to March 1 and the start of next year's fiscal session from February to April won the Arkansas Senate's approval Wednesday evening as lawmakers worked to avoid extending the special session beyond today. 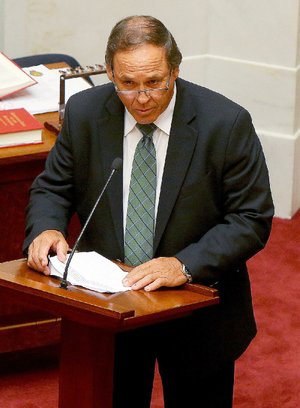 Photo by Stephen B. Thornton
Sen. Gary Stubblefield, R-Branch, introduces a motion to extract his bill from committee after it got held up. An amended version of the bill was approved in the Senate and the House. 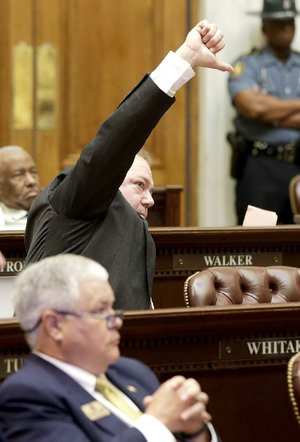 Photo by DANNY JOHNSTON / AP
Rep. David Whitaker, D-Fayetteville, signals his intent Wednesday in the House chamber to speak against the primary-change bill.

Senators voted to add amendments to both bills specifying that they would expire Dec. 31, 2016, in an effort to pacify Democratic opponents of the measure.

Supporters say the earlier election date would help create the "SEC Primary" with other Southern states and that the earlier primary would bolster the role of the state and the region in the presidential primary process. The SEC is the Southeastern Conference, an athletic conference that covers much of the South.

Opponents said it would create a year-long campaign season, with candidates starting in November 2015 and not wrapping up until Nov. 8, 2016.

During the regular session, a similar bill died in a House committee after passing the Senate. It would have moved the presidential primary, but not the primaries for other offices. Holding separate primaries on separate dates would have cost an additional $2 million, state officials said.

Republican Gov. Asa Hutchinson later asked the Republican-controlled Legislature in a special session that started Tuesday to pass bills moving the primary elections forward and pushing the fiscal session back.

The legislation that cleared the Senate on Wednesday night "gives the members an opportunity or really the public to see if it something that is going to work," said Senate President Pro Tempore Jonathan Dismang, R-Searcy.

"There was just some hesitancy about making it something permanent," he said.

Sen. David Burnett, D-Osceola, said the revised legislation is better than the earlier version because "I don't think it ties into a long-term deal where your election starts in November and goes to the following November."

"There seemed to be quite a bit of interest from moving it forward, so Arkansas would have more credibility in the election process in the primaries, so I am for the compromise," he said.

The Senate's action to approve the two bills came after the chamber voted to refer the bills back to the Senate State Agencies and Governmental Affairs Committee, which amended them.

Earlier, the Senate voted 21-10 take the rare move of extracting the bills from the eight-member committee after it split along party lines, with four Republicans favoring the legislation and four Democrats opposing it.

Then, an effort to suspend the Senate's rules to allow the Senate to consider the bills Wednesday fell two votes short of the 24 required for approval. The Senate is comprised of 24 Republicans and 11 Democrats.

Under the rules, the Senate wouldn't have been able to consider the legislation until Saturday, Dismang said.

Eager to wrap up before then, lawmakers began looking for a compromise.

Senate Republican and Democratic leaders met off and on for several hours Wednesday afternoon before agreeing on the language in the amended bills.

The Senate voted 28-6 Wednesday night to approve Senate Bill 8, as amended, to shift the presidential primary election and other primary elections from May to March 1, 2016 -- the first Tuesday in March.

The bill, sponsored by Sen. Gary Stubblefield, R-Branch, goes to the House of Representatives. A virtually identical bill -- House Bill 1006 by Rep. Andy Davis, R-Little Rock-- is pending action in the Senate

The bill also would shift the one-week party filing period for candidates from the last week in February 2016 to the beginning of November 2015.

The Senate also voted 33-0 to approve SB5 by Sen. Jon Woods, R-Springdale, to require the Legislature to meet in a fiscal session starting on the second Wednesday in April rather than the second Monday in February in 2016.

That bill goes to the House. A virtually identical bill -- HB1008 by Rep. Charlotte Douglas, R-Alma-- is pending action in the Senate.

Earlier in the day, the House voted 56-32 to approve an earlier version of HB1006, but twice failed to pass an emergency clause, delaying implementation by 90 days.

Nonetheless, Rep. Nate Bell, R-Mena, said legislators need to realize the gravity of what they're doing before changing the primary date.

"It needs to be a thoughtful, deliberate, well-thought-out process," he said. "Like my old Cherokee grandmother used to say to me, if it's a good idea now, it'll be a good idea later."

Bell said HB1006 would entrench political parties and cause campaigning to cost more and last longer.

"I think the worst thing we can do is increase the influence of money in any of our political races, but particularly our judicial elections," he said. "Right now those campaigns are less than three months from filing to Election Day. What we're about to do is going to make them nearly eight months long and potentially more than a year."