Death toll at 24 in drenched Texas 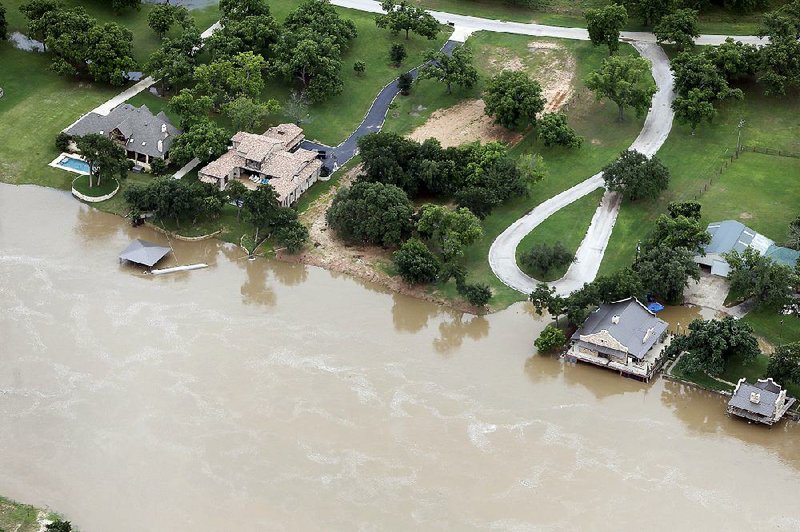 Floodwaters from the Brazos River advance on homes Friday in Weatherford, Texas, after the river, which had been receding, began to rise again. (AP / BRANDON WADE )

At least 28 people have been killed nationwide in the storms, 24 in Texas. At least 11 are missing in Texas.

More than 7 inches fell overnight from a line of thunderstorms that stalled over Dallas, which is in its wettest month recorded at 16.07 inches. The National Weather Service reports rainfall records have been crushed across the Lone Star State -- from Corpus Christi along the Gulf of Mexico to Gainesville near the Oklahoma border. Even Amarillo in the dusty Texas panhandle is in its second-wettest month on record, said meteorologist Dennis Cain from Fort Worth.

The downpour has inundated a state that until recently was suffering a severe drought. Swelled rivers and lakes may not recede to normal levels until July.

"In a lot of places we've exceeded the wettest year ever," Cain said. "You're talking maybe a 150- or 200-year event. It is quite astounding."

The greater Dallas area was one of the hardest hit Friday. Firefighters in the suburb of Mesquite recovered the body of a man who drowned in his truck after it was swept into a culvert.

Houston-area authorities found the bodies of two men who had been reported missing.

The body of 87-year-old Jack Alter, who was swept away when a boat attempting to rescue him from a bayou overturned, was found in the Houston Ship Channel. The search for a missing 51-year-old man was called off Friday after the U.S. Fish and Wildlife Service found a body on a southeast Texas beach that matched his description. The unidentified man and two others, who later escaped, had been fishing in the Brazos River on Thursday when they were caught in the currents.

Elsewhere, first responders said the body of an unidentified person was found near the banks of the Blanco River late Thursday.

A storm system last weekend that prompted the initial flooding also killed 14 people in the northern Mexico when a twister hit the border town of Ciudad Acuna.

The rain also seeped into homes Friday and stranded hundreds of drivers, many of whom lingered along highways that were nearly gridlocked from the high water and abandoned vehicles.

Exacerbating the problem for first-responders are people who have been going around barricades to take pictures of the floodwaters, said Clay Jenkins, county judge of Dallas County. He said those people are endangering themselves and stretching thin the first responders' resources.

"Floodwaters are never safe to play around, take a picture around, walk around," Jenkins said. "We don't need any more loss of life."

The Colorado River in Wharton and the Brazos and San Jacinto rivers near Houston were the main focus of concern as floodwaters moved from North and Central Texas downstream toward the Gulf of Mexico. The mayor of Wharton, a city about 60 miles southwest of Houston, ordered the evacuation of homes along the Colorado River, which is forecast to crest in the area at just over 43 feet this morning.

Floodwater was already creeping into neighborhoods in the suburban Houston city of Kingwood near the swollen San Jacinto River, where residents were keeping a close eye on water levels.

"Everybody's worried about it," James Simms said from his second-story balcony, looking down at a flood that had reached his garage. "Those people who are going to leave are already gone. There's others like us who are going to wait until it's mandatory."

Teams continued to search through debris piles along rivers. Over the Memorial Day weekend, the Blanco River tore through Wimberley, a small tourist town between San Antonio and Austin. County authorities Friday identified the body of a 6-year-old boy who was killed when waters overflowed his family's cabin.

First responders with Texas A&M's Texas Task Force One from dawn until dusk have combed a 25-mile area along the river since Sunday. Will Welch, communications manager for the Texas A&M Engineering Extension Service, said responders have been using search dogs to comb through tightly compacted debris piles constructed of cypress trees, cars and bits of homes.

Welch said responders have been taking the search acre by acre, combing through a precarious soup of snakes, bacteria, herbicides, insecticides, fuel and other hazards intertwined with the other debris.

"It's like the front end of a bulldozer just scoured the river basin and just wiped out everything in its path," Welch said.

Information for this article was contributed by Jamie Stengle, Juan A. Lozano and John L. Mone of The Associated Press.