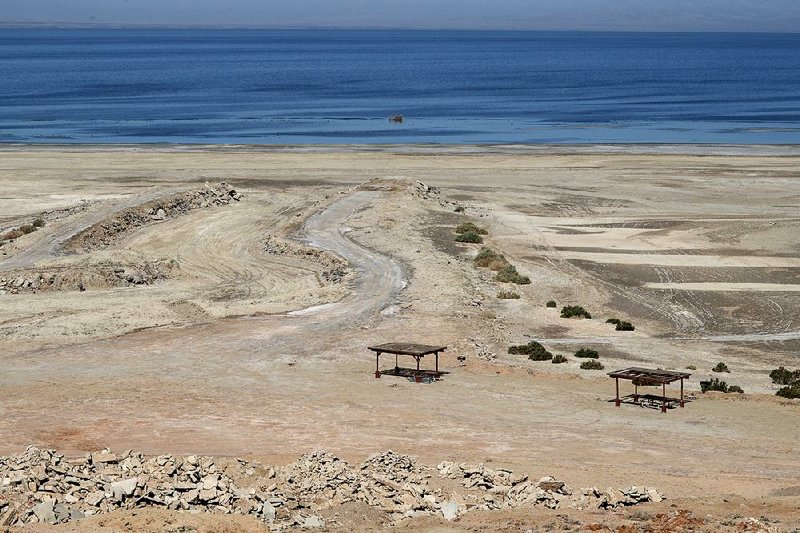 ALONG THE SALTON SEA, CALIF. --The bone-dry lake bed burned crystalline and white in the midday sun. Ecologist Bruce Wilcox hopped out of his truck and bent down to scoop up a handful of the gleaming, crusty soil. 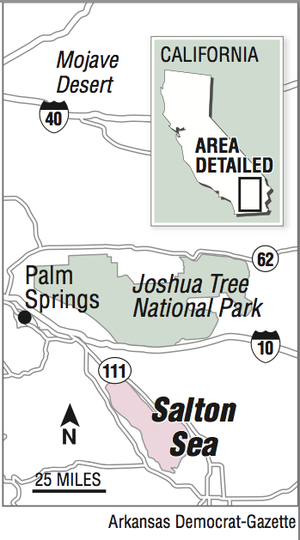 Photo by Arkansas Democrat-Gazette
A map showing the location of Salton Sea.

Wilcox squeezed, then opened his fist. The desert wind scattered the lake bed like talcum powder.

"That's disturbing," Wilcox said, imagining what would happen if thousands of acres of this dust took flight. It's the kind of thing that keeps him up at night.

The Salton Sea is the largest lake in California, 360 square miles of unlikely liquid pooled in the middle of the Sonoran Desert. Now the sea is slipping away. The Salton Sea needs more water -- but so does just about every other place in California. And what is happening there perfectly illustrates the fight over water in the West, where epic drought has revived decades-old battles and the simple solutions have all been tried.

Allowing the Salton Sea to shrink unabated would be catastrophic, experts say. Dried lake bed, called playa, is lighter and flies farther than ordinary soil. Choking clouds of particulate matter driven by powerful desert winds could seed health problems for 650,000 people as far away as Los Angeles. The effects would be even worse along the lake, where communities already fail federal air-quality standards and suffer the highest asthma rates in the state.

But the fate of the Salton Sea depends on a complicated series of deals that pit farms against cities, water rights against water needs, old ways of life against the new. The drought has forced a reconsideration of these agreements, with each side jealously guarding its claim to what little water is left.

Created by accident more than a century ago and fed largely by agricultural runoff, the Salton Sea is a difficult place to champion. Once a playground for Hollywood stars in the 1950s and '60s, the sea today is stark, largely abandoned and at times plagued by fish kills and noxious bubbles of hydrogen sulfide gas.

Birds still love the sea. They flock there year-round and especially during migratory flights. The sea provides habitat for more than 400 species -- the second-greatest diversity of bird species in the United States. The National Audubon Society considers it a bird site of global significance.

As Wilcox drove along the shore recently, he spotted eared grebes, lanky ospreys and black-necked stilts, thin birds that seemed to be wearing tuxedos.

Bird populations will plummet if the sea shrinks further, if wetlands disappear and fish populations wither. But it is the dust that scares people. After years of farm runoff, the lake bed is toxic, with high levels of arsenic, selenium and even traces of the banned pesticide DDT.

That nightmare scenario has played out before, 280 miles north, in the Owens River Valley. Nearly 100 years ago, Lake Owens was drained by the Los Angeles aqueduct to quench the young city's burgeoning thirst. The dust billowed out of the dry lake bed, feeding dust levels that today can reach 10 times the level federal officials consider safe.

Today, efforts to control the damage drag on at Lake Owens. More than $1.3 billion has been spent on mitigation. But the barren lake bed is still the No. 1 source of dust in the United States.

"All the mistakes made there are the ones we're trying to not repeat here," Wilcox said.

The Salton Sea lies about three hours east of San Diego in the Imperial Valley, which is called America's "winter salad bowl" because of the wealth of vegetables grown there. This agricultural anomaly in the desert is made possible because Colorado River water has been diverted through canals and aqueducts.

In 1905, one of those canals burst, and water pooled along an ancient basin 230 feet below sea level. That's how the Salton Sea was born.

The Imperial Valley gets 70 percent of California's annual allotment of water from the Colorado River. How the water is shared is spelled out by the Law of the River, drafted in 1922.

For decades, the water seemed endless. California often took even more than it was entitled to, and no one particularly cared. Farmers in the Imperial Valley treated the water like a cheap birthright. They flooded fields. They didn't worry about conservation.

The Salton Sea boomed. In the 1950s, resorts popped up. Guy Lombardo hung out with Frank Sinatra on the beach there. "Greetings from the Salton Sea" postcards showcased families playing on the sand.

Fish loved the sea, too. It became one of the nation's most productive fisheries. A dozen species, including tilapia and striped mullet, feasted on the nutrient-rich water.

But the sea was always a tough place to live, and the water has grown increasingly salty over the years as the result of evaporation and stagnation. The sea is now 50 percent saltier than the ocean. Today, only tilapia and desert pupfish survive. And officials don't know how much longer they will last.

Pressure on the Salton Sea began to mount in the late 1990s as Nevada and Arizona pushed for their fair share of the Colorado River. California was ordered to stop taking more than its legal allotment. That meant Imperial Valley farmers had to share.

An agreement was hammered out in 2003, but it wasn't popular in the Imperial Valley.

"It remains a live controversy," said Kevin Kelley, general manager of the Imperial Irrigation District, which manages water rights for farmers in the area. "It drew a bull's-eye on the water user here."

Imperial Valley agreed to stop farming -- and, most importantly, watering -- 50,000 acres and ship that water instead to San Diego and the Coachella Valley for residential use. In exchange, the urban areas paid for water conservation efforts in the Imperial Valley, such as lining canals and installing drip irrigation systems. The deal also called for 32 billion gallons of water a year to be piped directly into the Salton Sea to offset the loss in runoff from the 50,000 acres of fallowed farm fields.

"That's a lot of water for a lake that not a whole lot of people like," said Michael Cohen, senior research associate at the Pacific Institute, a water-policy think tank.

when the water stops

But that spigot is scheduled to be closed at the end of 2017, and the date looms like a hard deadline for ecological disaster.

"That's when the Salton Sea falls off a cliff," Kelley said.

Signs of the future are everywhere. One day last month, Wilcox stood on a narrow sliver of beach as dead fish, perhaps hundreds of them, bobbed in shallow waves.

The resorts are long gone, the beach-side communities dwindling. A few miles away at once-swinging Bombay Beach, the last traces of a marina poke out of the water. Everything seems to be crumbling or deserted.

"It's almost like a Mad Max movie," said Gilberto Cardenas, 34, of Costa Mesa, Calif., who said he was visiting the sea out of curiosity.

Many Salton Sea residents blame mismanagement for the lake's struggles.

"People are frustrated. Real frustrated," said Lisa Simpson, 51, who tends bar at Johnson's Landing in Salton City, where she can look out the window and literally watch the sea recede. Each year, the beach outside gets about 7 feet wider.

"The water used to come nearly to the door," Simpson said. She realizes that the sea is unlikely to return to its glory days, but she said preserving the lake at current levels is the right thing to do.

Wilcox stood at the bar drinking a soda. He understood that people were angry with the irrigation district -- at him, even. That's why, he said, he wanted to find some kind of solution.

The 2003 deal envisioned that solid plans to save the sea would be in place before the 32 billion-gallon tap is turned off. But that isn't even close to happening.

Last November, the irrigation district petitioned the California State Water Board to force the state to act. The board is still weighing its options. Several years ago, the state said its preferred restoration plan would cost $9 billion. But Kelley said everyone knows the state can't afford that.

Alternative plans to rescue the sea are popular these days. Wilcox drove from the bar to a nearby house that had been donated by a former resident to a group called "Save Our Sea." Wilcox planned to give an update on the irrigation district's efforts. He was greeted by about a dozen people, each of whom seemed to have an idea.

The group's president was Alex Ramia, a technologist living in Las Vegas. He had grown up in San Diego. He talked up a plan to dig a canal more than 100 miles long down to the Sea of Cortez in Mexico.

That would provide a water source, he said. A desalination plant would be needed, too. The entire project, he said, could be up and running for just $500 million. But state and federal officials have dismissed such pipeline ideas as impractical.

The district's new catchphrase for the sea is "smaller but sustainable." The sea's decline would be aggressively managed, officials say. One scenario: building a bird habitat ringed by earthen berms along the shore.

But paying for such a project remains a problem. And no one knows whether it would be enough to keep the dust at bay.

"There is no simple solution," Wilcox told the group.

As Wilcox drove home, he stole glimpses out the window at the fading sea. He is 61. He had planned on retiring soon. But he wants to stay on the job to see this through.

If nothing is done, the sea's water level will plummet 20 feet in the next 15 years, according to projections. Salinity will triple. The last of the fish will die off. And so will many of the birds.

And 100 square miles of lake bed will be exposed. The dust will be devastating.

All the sea needs is more water. But that's what everyone needs. It's a zero-sum game.

"We're taking water from one pot and putting it another," Wilcox said.

He believes the Salton Sea can be saved.

For him, there is no other choice.