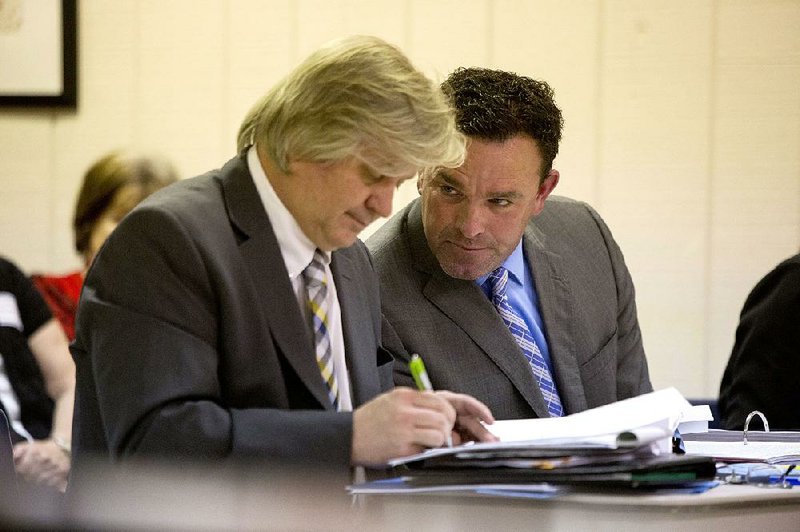 Arkansas Democrat-Gazette/MELISSA SUE GERRITS - 04/09/15 - Coach Brad Bolding, right, looks to Attorney David Couch during testimony against Bolding at his hearing regarding termination of employment April 9, 2015 at a special board meeting of the North Little Rock school board.

The act requires the district document a teacher's deficiencies and document its efforts to correct them.

Fox said during Thursday’s hearing that it’s his job to decide if the firing was lawful, not to substitute his judgement for the school board’s.

Jay Bequette, the attorney representing the district, said the school system complied with the law by documenting and attempting to correct Bolding's shortcomings through memos, emails and meetings.

Bolding filed a lawsuit against the district after he was terminated in April. In its firing notice, the district alleged Bolding violated inventory and purchasing procedures involving more than $230,000 and committed recruiting violations, the Arkansas Democrat-Gazette previously reported.

He was officially fired on April 10 in a special school board meeting.

David Couch, Bolding's lawyer, said during Thursday's hearing that the district fired Bolding because of a "vendetta" against him after he "aired grievances" against the athletic department.

Couch said after the hearing that he will appeal the decision.